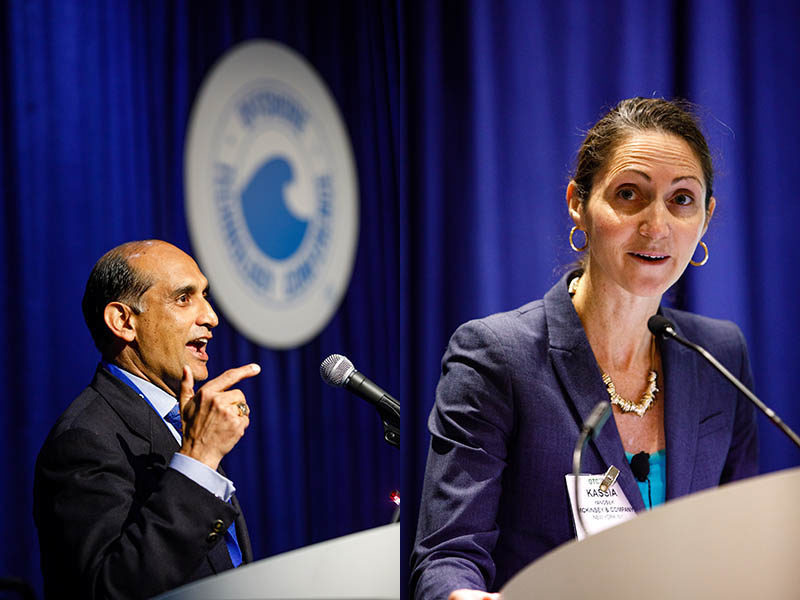 (Left)Sandeep Khurana of Granherne noted that 52 projects were sanctioned in the US Gulf of Mexico from 1993–2015, and their water depth and complexity continued to increase regardless of the oil price. (Right) Kassia Yanosek of McKinsey and Company said ten deepwater projects have received FIDs in 2016–2017.

A continued reduction in upstream project costs is essential, if major projects are to be competitive and gain investment approval in a “lower for longer” oil price market. Highlighting that topic, OTC paper 27949 by Sandeep Khurana and four coauthors was presented and discussed at a panel session on 2 May at the Offshore Technology Conference in Houston. The session’s title was that of the paper, “Bringing Upstream Projects to Final Investment Decision [FID].”

Khurana, senior manager at Granherne—a KBR company; and coauthor Kassia Yanosek, associate partner at McKinsey and Company, gave introductory remarks. Khurana noted that 52 projects were sanctioned in the United States Gulf of Mexico (GOM) from 1993–2015, and their water depth and complexity continued to increase regardless of the oil price. In that span, he said, the market shifted through the following characterizations: evolution, exuberance, inflation, hyperinflation, and correction.

“We are battling for survival; we are at the tipping point,” Khurana concluded.

Yanosek offered one brighter prospect, that projects are being sanctioned. Ten deepwater projects have received FIDs in 2016–2017. The industry is reshaping project designs to ensure competitiveness and engaging in innovative financing, but only 20% of the projects deferred because of the oil price collapse have since been sanctioned, she pointed out.

Edwin Verdonk, vice president for deepwater at Shell, said, “In oil and gas we are in a deflationary industry.” And with additional economies that have been achieved by lithium-ion batteries and in solar- and wind-energy projects, “our competition is wider,” he said.

Verdonk noted that many upstream projects were becoming uncompetitive even before the oil price collapsed. “For oil and gas in deepwater, we really have to reset our competitiveness. But I do think our industry has shown resilience.”

“Coming up with the right technology is critical for a project,” said Brian Cothran, president of the North American region for GE Oil & Gas. “From a supplier perspective, we really see that collaboration around the technology is an enabler for projects to move forward. It is very important. It’s a complex topic. It’s a very important topic to be able to get the technology right.”

To optimize project cost, “you can only get so far with discounts,” and commercial innovation also needs to be “front and center,” Cothran said. The industry is going digital and it will be disruptive, he said. However, productivity gains of 3% to 5% through the use of digital technology have been forecast for the industry, Cothran noted.

“When the [oil] price was high, we actually had our worst economic performance as an industry,” said Susan Cunningham, recently retired executive vice president of exploration, new ventures, frontier EHSR, and business innovation at Noble Energy. “One of the things we have to be careful about is there is always a longing that price is the savior. But actually, a price that’s too high becomes a liability, and we’ve learned this multiple times.”

We Do Best When Prices are Low

Presenting a slide showing crude oil price fluctuation going back to the 1970s, she said, “We’re not in a low price. We’re in about an average price. We do our best in the industry, believe it or not—it’s hard to say this—when the prices are low.”

Echoing Verdonk, Cunningham said, “We actually ought to be thinking about our competitors not as each other, but other energy sources.”

Likewise, Starlee Sykes, vice president of global projects—offshore at BP, pointed to the need for the industry to compete against alternative sources.

Sykes cited two recent, prominent BP successes as the operator in reducing deepwater major project costs in the US GOM. On its Thunder Horse South expansion project, BP relied on proven standardized equipment and technology, rather than building customized components, to start up the project in January 11 months early and USD 150 million under budget, she said.

For BP’s Mad Dog Phase 2 project, the original development plan appeared to be barely economic at 2013 oil prices. The company halted the proposal and, through extensive collaboration with partners and suppliers, devised an alternative plan that cut the project cost from more than USD 20 billion to USD 9 billion, Sykes said.

The company’s strategy is to buy offshore production infrastructure that it can operate and use its exploration expertise to discover resources that have been previously missed.

Talos purchased subsea wells in the Phoenix field in the US GOM but left the floating production unit in the hands of its owner, Helix Energy Solutions. Talos performs the production operations while Helix handles the maritime operations.

Phoenix originally was the Chevron Typhoon field. But the tension-leg production platform was toppled and rendered unusable by Hurricane Rita in 2005. The field and two additional subsea tieback wells in the Boris field were sold and the field was renamed.

The company has also acquired 160,000 exploration acres offshore Mexico in one of the early bid rounds following the country’s energy reform. Duncan said the attraction was GOM acreage that has been little explored and could be acquired at relatively low cost by moving ahead before other companies acted.

The time it takes for a shale producer to drill a well has been a major focus for the past decade. A new report says the industry should place equal weight on how long it takes a well to actually deliver first oil.

Subsea advancements in the works include longer tiebacks, an underwater drone that lives on the seafloor, and a robotic manifold capable of actuating dozens of valves. Do these new capabilities, born of necessity, signal a sea change in industrywide technology development?