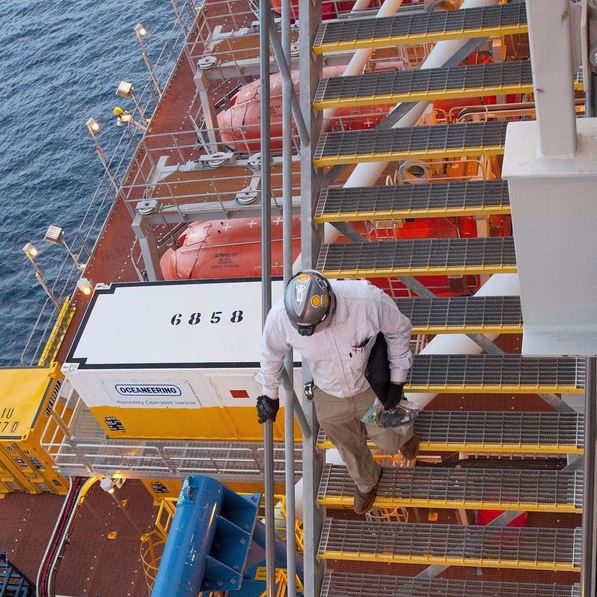 A worker descends a staircase on one of Shell's tension-leg platforms in the Gulf of Mexico. Source: Shell

Over the course of this downturn, Shell devised a new playbook that has made one of its oldest deepwater facilities a profit leader. Spanning a period from 2014-2016, when crude prices would drop from highs around USD 100 to below USD 30, the Shell-operated Ursa tension-leg platform managed a 27% increase in oil production while operating costs fell by 40%.

The financial feat answered a “cost emergency” brought on by the downturn while also boosting Shell’s view of the asset as a good performer to best-in-class. The company has since adopted the strategy as its operational model for several other floating platforms.

Though Shell is known in the deepwater arena for being a first mover of emerging technologies, there are none to speak of with respect to this project. Instead, the general strategy was to circumvent the factors that lead to people resisting change, even when change is most needed.

Ursa floats in water depths of about 3,800 ft in the Gulf of Mexico where it was installed in 1999, placing it amongst the longest operating deepwater facilities in the region. As such, it has been the subject of many improvement plans before.

However, in the past Shell found that when technical experts would introduce new processes meant to drive efficiency, the most efficient thing happening to them was the speed at which they were “put on the shelf” without being fully implemented by offshore staff.

“What we learned at Ursa was that in order to have sustainable results overtime, we needed be able to connect processes to something much deeper—we had to go deeper into the organization,” said Michael Fairburn, the former operations manager of Ursa and current general manager of regulatory affairs at Shell.

Fairburn coauthored a paper covering the project (OTC 27771) that was presented at the Offshore Technology Conference (OTC) earlier this month in Houston. From the podium, he described the project’s implementation as a “3-year journey,” one that required significant changes in how the individuals working onshore and offshore thought about each other and their work.

The most critical aspect of this was said to be leadership’s willingness to begin listening more to its facility staff. “We had to really focus on getting the people that were the closest to the work to identify the gaps in the performance,” explained Fairburn, adding, “They know what the real issue is.”

In addition to gaining trust and compliance by giving facility staff more influence, Shell found that engaging with them also generated ideas that were cited as critical to the achieved cost reductions. Absent from the paper though, and in the presentation, are detailed production data, financial metrics, or specifics on the measures taken to achieve major cost reductions in facility and well maintenance.

What the paper does offer is a strong argument for why operational excellence should be a major priority for deepwater operators constrained by today’s price regime. It tells of how allowing facility staff to direct individual improvement projects can raise the uptime of a waterflooding system from 64% to 87%, which is the asset’s highest level of reliability ever seen since water injections began in 2008. Ursa’s overall production systems now have an availability of 96%, a benchmark rate Shell is comparing to that of a downstream facility.

With the adoption of a bottom-up management ethos, Shell’s onshore staff began letting offshore teams take the lead on deciding which improvement projects were worth spending valuable time and energy on. That helped secure buy-in from the offshore staff to implement changes while making it easier for them to accept that the status quo was no longer good enough.

Troy Henson, a process implementation expert with Houston-based Evolve Partners and coauthor of the OTC paper, said this represented the greater challenge: to get people to view Ursa’s potential as something more than simply an above-average producer.

“It was easy to say, ‘Yeah, we’re doing well so why rock the platform,’” he related, adding that the level of comfort people had with Ursa, both onshore and offshore, meant that the bar had to be set at a higher level than ever before. New benchmarks were ultimately achieved on multiple fronts but during his talk Henson chose to highlight one area that may not be obviously important to most—a reduction in alarm frequency.

By listening to the chief operations staff, who were listening to alarms going off every 5 minutes on average, Henson said management realized how much time was being spent away from production related tasks. Typically, each alarm required about 10 minutes to rectify, during which time another one was likely to be triggered.

“It turned out that a lot of the alarms were not really meaningful,” explained Henson. “Something would bump into a limit-per-second that didn’t really matter, an alarm would go off, and they’d have to address it.”

After reviewing the parameters and thresholds, the alarm rate has been cut by half to an average of six per hour. “For offshore folks, that's an unbelievably low rate. We’ve never seen this before,” emphasized Henson, adding that on a good day less than one alarm goes off per hour.

Ursa staff also adopted a “find small, fix small” approach to their day-to-day operations and other technical benefits soon followed. The biggest impact was felt by the waterflooding system which is critical to the platform’s ability to pull oil from the aged reservoir.

Though it had been believed to be working fine prior to the improvement project, a review showed the waterflood system had an uptime of only 64% and was not delivering enough pressure to keep some wells flowing.

This realization prompted significant alterations to how the waterflooding system was operated and monitored. Shell even moved the waterflood staff out of Ursa’s main control room and into a dedicated space where their focus would be undivided.

The system now has an uptime of 87%. The improved waterflooding operation has increased the reservoir pressure which allowed Shell to open shut-in wells and the production achieved was higher than what the company had expected.

Shell’s confidence in Ursa’s enhanced money-making abilities was underscored earlier this year when the major announced plans for a three-well development of a satellite field. The project is notable because it is the first deepwater work Shell has approved since 2015 and is expected to have a break-even price below USD 40 per bbl.