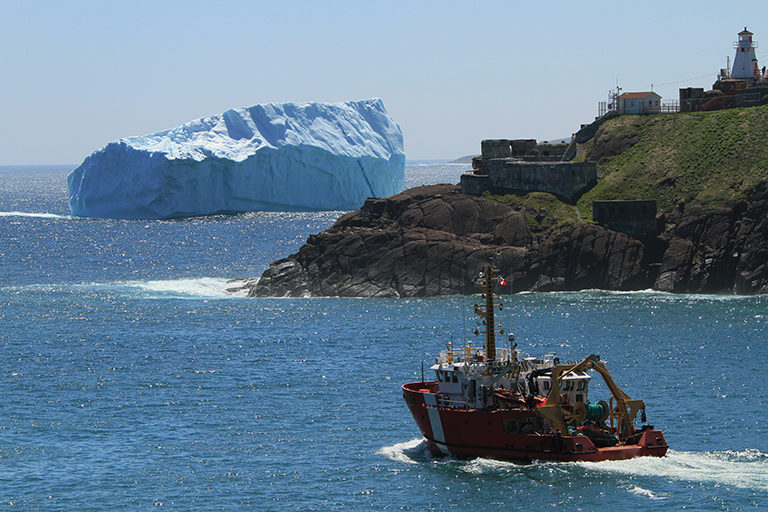 In early April, the shipping lanes along the coastlines of Newfoundland and ­Labrador, Canada, were quite congested, but not with tankers. This area of ­Canada—often called “Iceberg Alley”—was filled with 450 icebergs, floating south. This overabundance appeared suddenly; the US Coast Guard reported the increase from 37 to 450 icebergs in a week.

What is the cause? Scientists disagree. Some state that rising temperatures caused by global warming triggered this ­massive iceberg jam. Others say that it could have been caused by a ­violent windstorm in St. John’s, Canada, a few weeks earlier.

In either case, the “bergy water”—the term used by the ­Canadian Coast Guard in its ice bulletin—has officials believing that the number of icebergs this year will eclipse last year’s total of 687.

Opinions regarding climate change—is it real or not—are polar opposite. There are just as many people who passionately believe it exists and needs to be slowed as those who do not believe it exists.

Typically, SPE does not take positions on political or controversial matters. We are a society that disseminates technical knowledge for the upstream segment of the oil and gas industry. But this concern is so prevalent globally that last year, the SPE Board of Directors formed a climate change task force to identify “key aspects of climate change and public perceptions of climate change.” This group also was charged with developing a strategy for SPE’s response and recommending any ­actions that the society should take.

The board also requested that recommendations developed by the task force avoid any approach that could be construed as lobbying or political advocacy, as neither is consistent with SPE’s role and status as a not-for-profit organization.

The task force worked diligently for nearly a year studying climate change policies such as the Paris Agreement, which was developed at the 21st annual Conference of Parties. Population growth and economic development are driving increased need for and access to energy, so the Paris Agreement is expected to bring change over the course of this century. It has the potential to usher in new opportunities for SPE members through deploying carbon dioxide capture, use, and storage (CCUS), further accelerating natural gas as an option to coal, changing the infrastructural load as natural gas becomes an essential component of a more flexible power generation system, and pushing oil into new markets as it is displaced from some of its current uses (such as transportation).

Based on these expected changes, the task force proposed that SPE adopt a climate change strategy that maximizes alignment with SPE’s mission and vision, while positioning us to expand the mission and vision should the landscape change this century. The twofold strategy includes ensuring the inclusion of SPE technologies and practices that may help address climate change while meeting the growing energy needs of the world. The second component is to take the necessary steps to inform SPE members about climate change issues and their connection to what members do, the technologies they know and apply, and the partnerships and communities to which they belong or could belong.

Using the power of SPE to support our members, the activities that SPE can take include:

Of course, SPE already is actively involved in some of these steps. The strategy further enables us to broaden our suite of activities.

Since SPE does not have a focus on assessing climate science or guiding policy, the task force recommended that we not develop a public position statement on climate change. At its meeting in March, the SPE Board of Directors accepted the task force’s recommendation.

The board approved the success plan created by the task force. The success vision for the recommended SPE climate change strategy states that:

As SPE president, I am satisfied with the task force’s findings and recommendation. I believe that these action points are both creative and doable while also being meaningful and reliable. These recommendations dovetail nicely with the sustainability messages of my SPE president predecessor, Nathan Meehan. If you heard him speak or read his JPT columns, you know that his common refrain was that as engineers we must “improve people’s lives,” and the key ways Nathan listed are minimizing methane emissions, reducing/eliminating flares, focusing on energy efficiency and conservation, ensuring wellbore integrity, reducing our surface footprint, and eliminating oil spills. In other words, he espoused that we can go about our business as petroleum engineers but with a “commitment to doing the right job and getting that job done right.”

I, too, have a special concern about operating in a safe and environmentally responsible manner, and I have written on these topics a few times in this space. For example, in my ­November column, “To be Leaders of Integrity, We Must Earn Trust,” I explained my viewpoint that small-footprint operations save money. And, in a time when concern about use of fossil fuels is growing in North America and Western Europe, our past actions affect our social license to continue to operate. People are concerned about our approach to sustainability and the potential for climate change.

SPE is not in the business of making or establishing policy change. But I believe our decisions and actions as engineers can make a positive influence on our world. As I speak to SPE members worldwide, I usually end my presentations with a NASA image of Earth at night. First World nations are brightly lit with electricity while other regions, primarily Africa, are largely in the dark. We have so much work to do to bring energy to ­everyone, but we must do so wisely. I like to tell people that in addition to my engineering degree from Texas A&M University, I have a law degree, too. But lawyers don’t solve the world’s problems; engineers do. We can engineer a better and brighter future for generations to come.