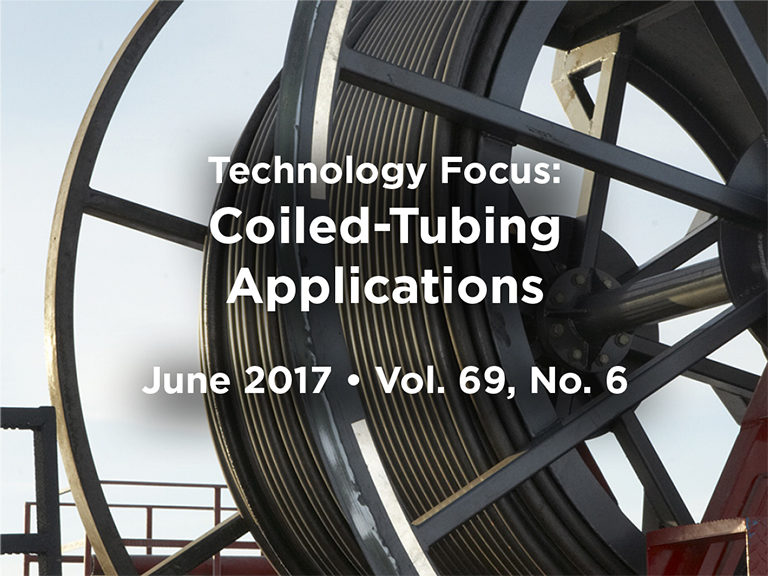 The treatment in a deepwater, frac-packed well with fiber-optic-equipped coiled tubing (CT) and a rotating, hydraulic high-pressure jetting tool achieved successful stimulation of a 500-ft-long frac-packed zone after several previous failures using different techniques. By using CT equipped with fiber optics and downhole measurement tools, engineers were able to perform a data-driven operation based on real-time bottomhole measurements and distributed-temperature surveys. This successful treatment improved productivity by 75% compared to the well before treatment.

Diagnostic work indicated that a well had considerable skin and flow impairment. Several acid treatments had been bullheaded into the well since initial completion. The treatments were ineffective, either producing no material results or producing only short-lived improvements with a quick return to original conditions.

Slickline diagnostic work conducted on the well indicated the possible presence of a mechanical obstruction or fish of some sort near the bottom of the lower lobe of a sand package in the well. However, lacking correlated depth measurements, it was unclear whether this obstruction was below the entire producing zone or high enough to obstruct some of the lower screen section.

The formation consists of two lobes of one sand package at an approximate angle of 33°. On the basis of log data and core samples, the permeability of the formation across these lobes was highly variable. On the basis of that variability, it was believed that the most likely scenario was that the upper portion of the lower lobe was the highest-conductivity region of the completion and that the previous acid treatments had mostly been stimulating that portion of the well to the detriment of other areas. It was believed that the more-laminated-looking pay in the upper lobe, in particular, was underperforming.

This article, written by Special Publications Editor Adam Wilson, contains highlights of paper SPE 184753, “Overcoming Challenges of Stimulating a Deepwater, Frac-Pack-Completed Well in the Gulf of Mexico Using Coiled Tubing With Real-Time Downhole Measurements,” by Eric J. Gagen, SPE, Schlumberger, Alex D. Menkhaus, Kellogg School of Management, prepared for the 2017 SPE/ICoTA Coiled Tubing and Well Intervention Conference and Exhibition, Houston, 21–22 March. The paper has not been peer reviewed.
...
This article is reserved for SPE members and JPT subscribers.
If you would like to continue reading,
please Sign In, JOIN SPE or Subscribe to JPT

The success of water-conformance operations often depends on clear identification of the water-production mechanism. Such assessment can be complicated significantly when formation damage is also occurring.

The authors examine methods of adopting an aggressive approach to optimizing stimulation design to lower the break-even level of operations and evaluate the results.

A study by a real-time monitoring company showed that many coiled-tubing strings are retired with a lot of life left in them. It suggested companies could lower costs by using pipe for a longer time and could benefit from multicompany studies showing how their decisions compare to the competition.