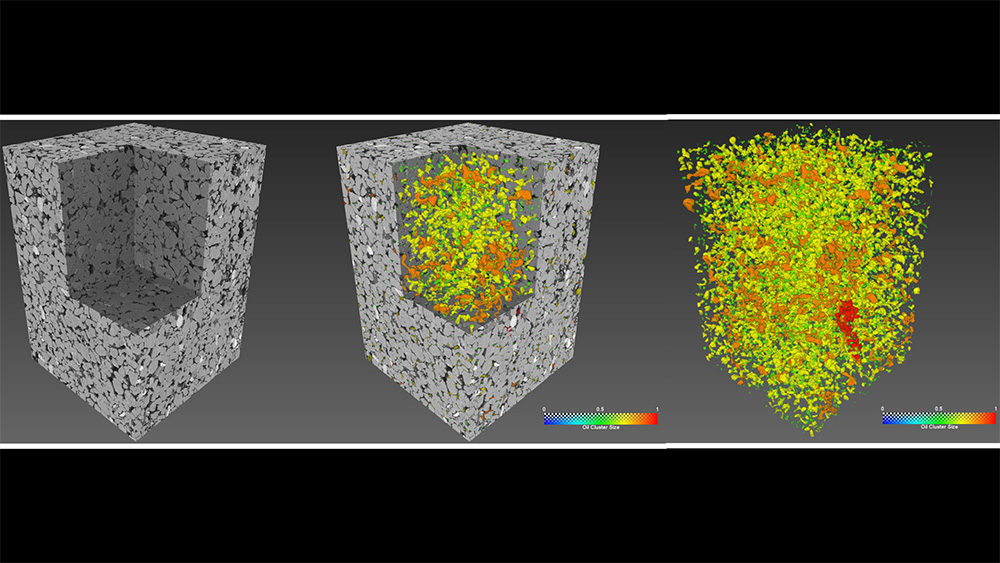 Increasing levels of micron-scale detail in a small sandstone sample from a field in the deepwater Gulf of Mexico. The one on the left shows pores (black) and minerals (varying shades of gray). The middle area is cut out to only show the location of residual oil after a water injection simulation. The one on the right shows the injection result over the entire volume. The colors indicate the volume of oil, from the smallest, blue, to the largest, red.

BP is working to push digital rock testing into the mainstream of conventional development.

The latest step in its decade-long journey was a deal with Exa, a software firm that partnered with BP to develop a program modeling two-phase flow in conventional reservoirs based on data from virtual 3D images of small samples of reservoir rock.

Compared with methods used by traditional core labs, this approach significantly reduces the time and cost required, and offers the processing software in a form that could help broaden the use of this disruptive technology.

The system measures relative permeability—in this case the degree that flow rates are reduced when oil and water are mixed—using a 3D digital image based on scans of small rock samples by a micro CT, known in the medical field as computed tomography. CT machines are used for medical scanning and are able to image extremely fine details. 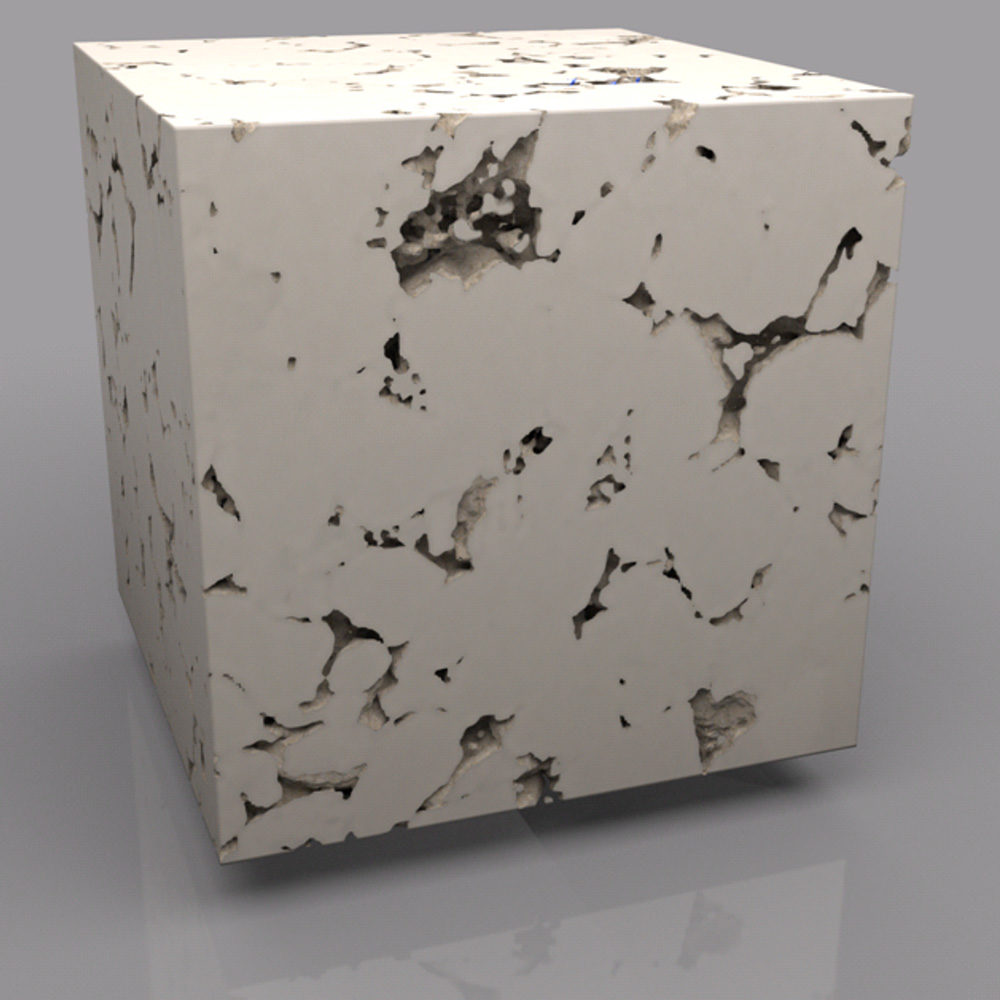 Image: A sandstone showing solid grain (light) and open pore space (dark) through which fluids can flow; this represents the input to the DigitalROCK flow simulation solver. Source: Exa.

Video: This simulation shows a waterflood in progress, created using the Exa DigitalRock simulator, which was created through a partnership with BP to measure multiphase flow. Source: Exa.

“We have so little relative permeability data. We see this as a potential game changer for subsurface modeling that more accurately characterizes reservoirs,” Fredrich said.

Measures of relative permeability have long been done in core labs. Digital analysis can reduce the time required to get back relative permeability results from a year or more to a couple of weeks or less, and the software can be scaled up to allow BP to speed work by running simulations on thousands of processors at its supercomputing center, she said.

The software deal with Exa allows BP to use the software it helped develop with the maker of fluid flow simulations, and for Exa to market it to other users.

“We are first company to bring an accepted, credible technology to market” to simulate multiphase flow and predict relative permeability using this sort of data, said David Freed, vice president of oil and gas for Exa.

This milestone was the product of more than 3 years of work by the partners that combined Exa’s expertise on the advanced math used to simulate complex fluid flows, which has been widely used in the auto industry, and BP’s knowledge of oil and gas reservoirs plus what it has learned over the past 10 years about accurately and efficiently creating 3D digital images of rocks for analysis.

Fredrich said an SPE paper is planned that offers an update on the development and validation of this method. One reason for its openness is that BP wants to make its case with its partners in big oil and gas projects that this approach is as reliable as traditional methods for decision making.

Papers will also encourage wider use of digital rocks method, where multiple players are already competing the advance the state of the art, as evidenced by the fact that BP’s relative permeability paper not likely be the first presented at an SPE conference.

Whiting Petroleum and DigiM—also a 3-year development effort between an oil company and a simulator maker—will present a paper at the Unconventional Resources Technology Conference in July on the work flow they validated for three-phase relative permeability measures in extremely tight unconventional rock.

“Whiting is currently performing multiphase flow simulations and computing 2-phase and 3-phase relative permeability on unconventional rocks routinely,” said Lyn Canter, senior geoscience advisor and rock lab manager for Whiting, which has used it to “to expedite our exploration and production decisions.”

And Ingrain, one of the pioneers in commercial digital rock imaging and analysis, has published papers on its approach to measuring relative permeability in unconventional rock and complex carbonates.

These competing claims will lead to arguments over who was first, which is better, and what process most accurately represents reality.

It is clear this once esoteric frontier for research and development work is evolving into a competitive market with offerings aimed at solving a range of problems by supplanting long-standing rock property testing methods.

One point of agreement is that BP’s push into this market is likely to speed its growth.

“We are happy to see a big, technically advanced company like BP sees this as important enough to invest the time and resources in it to drive it forward. It is only good for the technology in general,” said Joel Walls, director for unconventional resources at Ingrain.

“Those in the unconventional resources business are used to doing things differently,” Walls said, adding, “Nothing they used to do (in conventional reservoirs) worked in shale, from drilling and completions to core analysis.”

The work by BP and Exa will provide a road map and a key software tool that reduce the barriers to entry for other companies, but using digital rock technology to guide exploration and production decision remains technically challenging.

This adds to the tools and services available in a field where service companies such as Weatherford and Ingrain offer a range of digital rock imaging and interpretation services.

Both Fredrich and Canter said their companies’ have benefitted from their commitment to building up in-house teams of experts that mix PhDs with expertise in imaging and digital analysis with geoscientists who provide critical expertise on the realities of reservoirs and those who manage them.

The value of simulations based the digital imaging depends on experts to ensure the images reflect reality, each microscopic component is accurately identified for computer analysis, and enough samples are used to accurately describe the bigger picture.

“Good fluid flow physics and software is necessary but not sufficient,” Walls said, adding, “To put it briefly, it’s a process not just a computer program.”

Canter said there is value in building an in-house multidisciplinary team of experts with expertise in rocks and imaging, with, the budget to do the thorough work needed to provide data that can be relied on to help decisions when a lot of money is at stake.

“In one of our horizontal targets, we characterized the interval using 50 samples from a single cored well as a baseline, and extended out to other sub-regions with many more samples,” she said, adding, “This would be a cost-prohibited approach with a third party vendor.

Users of EXA and DigiM can either license the software, or do the computationally demanding simulations on a cloud-based platform.

The data required requires a micro CT scan, which along with the analysis can be done by service providers.

And this is aimed squarely at expanding use of digital rocks technology in conventional reservoirs, where the old rock testing methods work, though often not at the fast pace demanded by an industry pushing to speed development.

At this point the BP-Exa relative permeability simulator is designed for two-phase flow and cannot handle complex carbonate reservoirs.

“Complex carbonates have micro porosity, which will be below the resolution” of the micro-CT image, Freed said.

Both partners plan to use what they have learned to move into more difficult rock in the future.

BP’s strategy has been to start with conventional rock imaging, which presents fewer challenges, and develop it to the point where it has been validated and generates measures that will be used by its asset management teams (SPE 170752). Next it will move on to more challenging rocks

A switch to methods offering faster results at a lower cost is expected to encourage more rock testing, which could yield significant rewards.

In deepwater fields it could be mean better estimates of the oil in the ground, and help asset teams develop more productive initial development plans.

In older fields it can be applied to systematically observe how a water flood would sweep oil at the pore scale for various rock types in the formation, including those produced later This could  help engineers quantify displacement efficiency and to optimize the design of the water flood.

In older fields it could be used to better manage water flooding by simulating how different approaches might perform.

“There is still a lot of oil left in ground in water floodable sandstone,” Freed said.

The small samples needed for the method could come from sidewall core samples, which can be collected quickly over a larger area than a whole core sample, and analyzed in weeks using digital rocks methods.

“This reduction in cycle time is a key aspect of this technology,” Fredrich said, adding, “There is pressure to reduce the time it takes from discovery to making final investment decisions.”

She said traditional core samples will still be needed, because geologists require them to visualize the reservoir architecture. And Walls said some traditional methods, such as using mercury injection to measure the size of pore throats in rock, will continue to be used because it is quick and relatively inexpensive.

Reducing the time and cost of relative permeability tests could also address a significant limit of all rock tests—results from tiny samples are used to predict rock properties over a large area.

While the plugs used for traditional core analysis are larger than small bits used for digital rock analysis, they are still tiny compared to the reservoir. But the nature of the digital rock method allows more spots to be tested within the time and cost limits set for projects.

More data should provide a fuller picture and a better estimate of the level of uncertainty, “to understand what variance might look like in the subsurface,” Fredrich said.

Over time she said they will work to create a methods that can measure the relative permeability when there are more phases, such gas, oil and water, and move into tighter rock.

“We see this entire area building. It is opportunity rich. There are lots of possibilities,” that could be valuable for exploration and production, she said.