A Passion for Energy Education 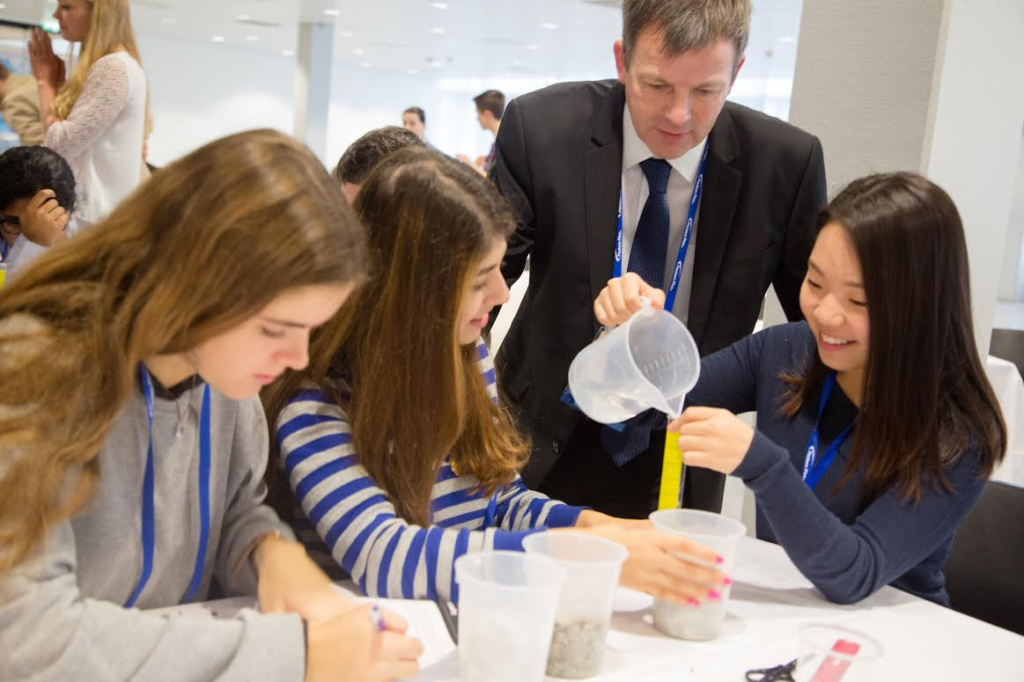 Colin Black is managing director of Carjon-NRG Ltd., a company he formed in 2015. He is a consultant in exploration and production, asset and well integrity, and renewables. He joined the SPE Aberdeen Section in 1993 and has supported technical programs as well as school career guidance and Energy4me education events Internationally ever since. He is a member of the SPE Global Energy Information and Energy4me Committee, and served on the board of SPE Europe Limited from 2011 to 2017. He currently chairs the NASA in Aberdeen “Inspiring the Next Generation" Committee. JPT spoke with him recently about his thoughts on his career and energy education.

How did you get involved in energy education?

In 1993, I joined SPE and got involved with the Aberdeen Section Program Committee. I am also a member of the Energy Institute and, in 1998, I was asked to help out at my old school with SPE energy information career evenings promoting the oil and gas Industry. This grew to promoting an offshore apprentice program in several schools and supporting Education Day at Offshore Europe since 1999. This then evolved to becoming involved in the industry/education partnership Careers in the Oil, Gas, and Energy Sectors, which I cochaired. In 2009, we created the SPE Aberdeen Schools Career Guidance Committee, which I also chaired and still actively support.

How did you get involved working in the oil and gas industry?

From about 12 years old I started helping my father refurbishing engines and gearboxes and, at 16, served a 4-year mechanical engineering apprenticeship. My journeyman was the go-to guy for any problems and he mentored me. In 1982, the problem-solving skills I developed were in demand in the North Sea oil and gas industry and I was approached to apply for a job in a sector I knew nothing about. I spent several years in offshore drilling, logging, and well testing including time on the Piper Alpha production platform.

In 1990, I came onshore and managed Petroquip operations for a highly innovative completions technology company, Petroleum Engineering Services. The company grew between 35% and 40% a year for 10 years and, as operations manager, I attended Robert Gordon University to learn about strategy creation and implementation. PES was sold to Halliburton in 2000 and having gained an SVQ level 5, Post Grad Diploma, MSc in management and wealth of business experience I left to use this knowledge to grow other small innovative companies. From there I coinvented several patents and helped developed numerous businesses internationally.

What are some of the ways that SPE’s Energy4me program have been implemented in Aberdeen?

In 2009, SPE President Behrooz Fattahi invited me to join the SPE International Energy Information Committee. During that year’s Offshore Technology Conference, I learned about www.Energy4me.org and joined the teachers in Energy4me workshops. The great work carried out by the SPE and Mary Spruill of the National Energy Education Development Project inspired me to bring this concept to the Offshore Europe Conference and to schools in the UK.

How did the partnership between SPE and the Aberdeen Science Center come about?

In 2011, I was appointed to the board of SPE Europe and within the charity guidelines we make donations to charitable organizations promoting the oil and gas industry. I told the SPE Board of my vision to bring Energy4me to Offshore Europe and embed Energy4me in the Scottish school curriculum. The problem was that Energy4me is an excellent resource but is not aligned to the Scottish Curriculum for Excellence and as such this blocked implementation.

SPE Europe Limited funded the science center to work with teachers to align Energy4me lesson plans with the Scottish curriculum and these resources are now freely available to every primary school in Scotland.

In 2015, I joined the board of the Aberdeen Science Centre and the SPE/science center collaboration works very well because SPE provides volunteers and the center’s staff are STEM (Science, Technology, Engineering, and Math) delivery professionals. We have just partnered with several organizations to deliver a “NASA in Aberdeen” project, which I chaired, bringing an astronaut and space scientist to Aberdeen to “inspire the next generation.”

What is the best way to spread the mission of Energy4me?

Energy4me materials are freely available on its website with resources in multiple languages. However, I would also like to see Energy4me committees in every appropriate SPE section.

This would allow focused and trained SPE volunteers to share relevant energy/oil and gas facts and career guidance with parents, teachers, career guidance staff, students, and the general public.

What energy education opportunities will be available at this year’s Offshore Europe conference?

SPE’s Inspire Programme will host s a series of activities, workshops, and lectures specifically focused on supporting and informing young people who are interested in joining the oil and gas industry or just beginning their careers. By engaging with local schools, universities, and young professionals, these programs hope to help encourage STEM topics and introduce a new generation into this incredibly diverse and exciting industry.

How are conferences such as Offshore Europe good venues for energy education?

The Offshore Technology Conference, the SPE Annual Technical Conference and Exhibition, and Offshore Europe are excellent venues for educational events as the standholders are presenting their cutting-edge technology and solutions. It is always a changing and evolving landscape, which gives teachers & students a degree of insight into our innovative sector. Conference keynote talks are also great for emphasizing that there will be an oil, gas, and energy sector for many years to come with STEM skills transferable to other sectors.

What impact has the current downturn in the oil and gas industry had on energy education?

Starting in this industry in 1982, I have seen multiple downturns and as many upturns, which obviously has an impact on attracting people to this great sector. We focus on energy careers with transferrable skills and, as volunteers, we can only inspire and don’t have actual jobs on offer.

When things were going well with oil prices at over USD 110/bbl, multiple live major projects at the same time were causing recruitment issues. Some companies spent thousands of pounds on bespoke one-off educational/schools events that were great at the time but have now disappeared.

During this downturn more than any other, companies, professional organizations, and schools have worked together on cost-effective and efficient projects that are sustainable and deliver real results.

In light of the current downturn, Energy4me has had to adapt itself by changing its approach. Traditionally, Energy4me workshops were held alongside most major SPE conferences and exhibitions, but lack of funding has made this difficult. Faced with the need to keep the global momentum going, Energy4me now approaches individual organizations within the industry to fulfill their corporate community social objectives by allowing Energy4me workshops to be conducted at their facilities. This ensures that the Energy4me objective of reaching a certain number of students and teachers annually are met while at the same time allowing the host company the opportunity to give back to the community and market itself to future employees within the community. For more information on this initiative, contact Zunaid Jooma, energy education specialist, SPE Eastern Hemisphere, via email.

Since you have become involved in energy education, have you seen any advancement in the general public’s understanding of the oil and gas industry?

Where we have had interactions or projects with schools, the positive understanding of the sector significantly increases. However, we are SPE volunteers and there is a limit to what can be achieved. Again this is another reason for working closely with professional STEM delivery organizations such as the Aberdeen Science Centre.

What are the biggest hurdles that must be overcome to educate students, teachers, and the public about energy and its importance?

In programs at schools, we don’t start with a dialogue about oil and gas; we talk about the energy mix and power generation, which leads to careers in wind, wave, solar, and gas as power sources. That opens up a dialogue on hydrocarbon extraction and the uses of hydrocarbons and its uses in our everyday life. Once we are on this page we can discuss geology, petroleum engineering, drilling, logging, well testing, production, refining, etc. and the links to STEM subjects in school.

I would love to see the energy industry really inspire the next generation, educate students, teachers, and the public about energy and its importance by further collaborating with organizations in delivering factual information and showcasing innovation in our sector and how school STEM activities can lead to an exciting career, like the one I have had.

In summary, why are you so passionate about the importance of energy education?

I have been privileged to work with SPE Presidents Nathan Meehan, Helge Haldorsen, Egbert Imomoh, Ganesh Thakur, and Behrooz Fattahi on various Energy4me projects and events and their passion for inspiring the next generation inspires me and fellow volunteers.

I have had a great career in oil and gas and am involved in several international and renewable energy projects. There is certainly a future ahead for this industry and we will need our young people to get involved.

If you are an SPE member, you have a global network of friends you may not have met yet. Volunteering to support Energy4me and giving something back to inspire others is great way to meet and mentor fellow SPE members. It certainly has been for me. I have supported Energy4me projects in the US, Ghana, Angola, Nigeria, Mexico, Brazil, Italy, Holland, the Caspian, Norway, and Australia and the satisfaction of helping in some small way to make a difference is extremely rewarding.

A Passion for Energy Education