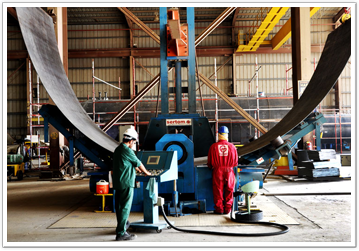 Among the thousands of exhibitors at each year’s Offshore Technology Conference (OTC) are dozens of companies making their initial appearance at the world’s largest industry show. This year, one such company was Gulf Steel Works (GSW), a steel-fabrication business based in Saudi Arabia’s Jubail Industrial City. Like many other companies, GSW’s officers hoped to capitalize on the unparalleled worldwide industry exposure that comes with a presence at OTC. However, they also hoped to play their part in a Saudi initiative designed to spark international investment in the Saudi hydrocarbon sector while simultaneously bolstering the development of the country’s infrastructure in an effort to strengthen the autonomy of its economy.

GSW’s motivation for appearing at OTC was similar to that of many businesses. Zafer J. Jeha, GSW’s general manager, explained that the company’s presence “was mutually beneficial to us and to others at the show. We have many suppliers for our products in the US, we have competition we would like to observe, and at the same time, we want to introduce ourselves at the largest industry exhibition in the world.” Added Salah A. Al-Otaibi, managing director of Pan Gulf Industrial Investment, the parent holding company of GSW, “We have been considering this for the last 2 or 3 years. We would like to be involved with OTC for years to come. For us to expand globally, OTC is an ideal platform to start with, because one sees people from all over the world.”

But GSW’s involvement with OTC is also part of a larger effort within Saudi Arabia to employ more local fabricators and suppliers, as well as the Kingdom’s complementary plan to diversify its economy so that it may be less reliant on hydrocarbons. Against the backdrop of President Trump’s recent visit, the Kingdom’s “Vision 2030” program has gained increasing attention across the Middle East and the world. Both Jeha and Al-Otaibi commented upon the company’s intended growth areas and its role in the larger Saudi development plan.

The fast-growing, 20-year-old company wishes in particular to expand two of its four division. In addition to its steel-fabrication and storage-tank lines of business, it wishes to expand internationally its cladding and skid-fabrication divisions and to gain customers outside of the Middle East. As Jeha notes, “The best time and the best place to show the world who we are and what we do is OTC. People at the show have been very impressed with our quality and our capabilities.”

Al-Otaibi explained the importance of recent Saudi efforts, spearheaded by its national oil company Saudi Aramco, to involve more domestic companies in the development of the country’s infrastructure, and how that, in turn, will prompt international investment, far from discouraging non-Saudi companies from participating in the country’s industry. “This effort is beneficial in many ways,” he said. “One, Saudi companies are dealing with local people for deliveries, for price negotiations, for whatever problems may come up. Also, it’s beneficial for Saudi Aramco to make sure that fabricators like us are spending more money within Saudi Arabia, which will improve efficiency and therefore encourage outside investors to come to Saudi Arabia.”

Jeha added that GSW is one of the first companies that Saudi Aramco has worked with “in terms of achieving their objectives. Aramco’s goal is, by 2021, to purchase 75% of their materials locally. Now it’s 35%, so they are going to double what they purchase from Saudi businesses. That has helped GSW, but one of the reasons we are at OTC is that we, in turn, don’t want GSW to be heavily dependent on one company ourselves. We want to be efficient and competitive internationally.”

GSW’s officers and colleagues are upbeat about the current state of the industry. “We’ve felt the downturn, but we are still doing fine,” Al-Otaibi noted. “Yes, there is a pressure on volume and margin, but we believe there is enough business for us to grow. However, we don’t want to be heavily dependent on oil prices. That’s why we’d like to go to different countries to balance our risk. We can complete projects that save a great deal on capital expenditure. There may be few new investments in new fields, but there is investment in new or improved infrastructure. All the existing pipelines, all the oil wells—that’s our aim. We don’t aim specifically at green projects. We go after brown projects.”