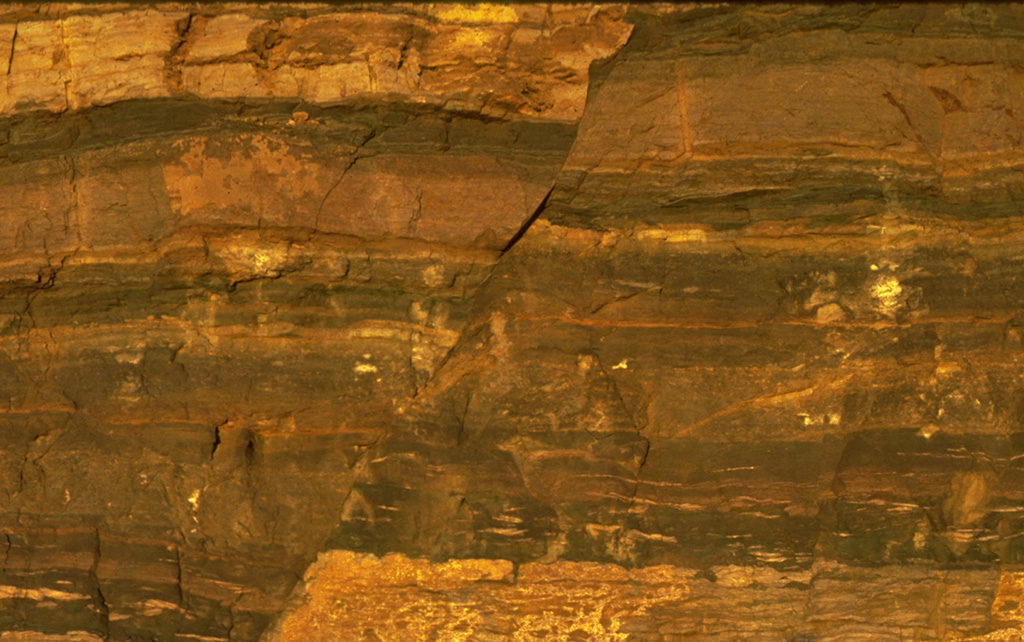 Openhole logging has not been a good way to spot where to fracture in shale formations like this one. Vladimir Ingerman, president of Amros, is out to change that. Source: Amros.

It is commonly known that production from shale reservoirs varies widely, and conventional logging methods are not good at predicting where oil and gas will flow.

Vladimir Ingerman is looking for a chance to change that.

The geoscientist is president of Amros, which is a consulting company that has worked for the past 4 years to adapt its method for using basic openhole logging data to identify the productive spots in shale reservoirs. Convincing operators in the Permian Basin that they should test the method is a challenge.

For one, logging methods used in conventional wells have performed poorly in unconventional settings. As a result, he said “many operators are disappointed with the results and some of them have stopped running openhole log data.”

Lacking a quick, affordable way to spot the more productive rock, they continue to place fracture stages at evenly spaced intervals, and use multiwell pads to evenly drill large areas.

At a recent meeting of the SPE Gulf Coast Section Permian Study group Ingerman explained how he could identify where they could ideally locate wells and fracturing stages using four openhole logs with 24 hours to analyze the data.

Another challenge is that he is from way outside the shale business.

The production prediction method using openhole well logs was developed decades ago for conventional reservoirs when Ingerman was working in western Siberia. The formula was distilled from a unique set of data that included hundreds of hydrodynamic or pressure build-up well tests, and openhole logs. The production prediction method was used successfully to develop many thousands of wells in conventional reservoirs. Later the method was modified for shale plays.

The result predicts permeability and production per hundred feet of wellbore using the data from four well logs—gamma ray, resistivity and neutron porosity, and the density porosity.

Adjusting the method for different reservoirs or production mixes, such as gas and liquids versus mostly oil, requires adjusting the coefficients in the proprietary formula, which takes a couple weeks, he said.

“Geometric fracturing is great is homogenous formations. The difficulty is this is inhomogeneous vertically and horizontally,” he said.

But the industry continues to fracture evenly spaced perforations, and use evenly spaced wells to develop large areas, because it lacks a reliable, low-cost method that offers results fast enough to keep up with the pace of development.

To make his case, he showed results from a 100-well study done for an unnamed oil companies in the Permian and Marcellus shale with well logs, where he used his method to identify which layers are likely to be the productive, and which will not be.

For example, in one well there was an 87-ft section producing 11 B/D, or 12.6 bbl/100 ft, while another 424 ft of reservoir was producing only 9 B/D, or about 2.2 bbl per 100 ft. Drilling a horizontal well in the best zone is likely to producing 880 B/D versus 150 B/D in the longer section, which will cost more to put into production. An operator on that well would be advised to fracture the small percentage of good rock and avoid the rest.

Converting those vertical results into advice on where to drill a horizontal well requires at least two, and preferably three wellbores along a likely well path to observe how things change along the way.

There is an enormous base of vertical wells in the Permian, many of which still have logging records to analyze, which could be used to identity the 20% of the reservoir rock that he said is likely produce 12 times more.

With the rebound in drilling pushing up the cost of completions, the penalty for drilling and fracturing unproductive rock is rising. Big service companies are offering services that are also aimed at improved well targeting.

But in the examples Ingerman offered, larger competitors required core and cuttings collection and analysis, which can require months, as well as logs he described as non-standard. Selling operators on openhole logging will require convincing them that the tools will not get stuck in the narrow holes they are mass producing.

After the session Ingerman talked to a recently discovered ally, Randy Conley, the global business development manager for Signum Instruments, a maker of slim logging tools.

The young company recently rolled out logging tools for narrow wellbores, with a 2.25 in diameter tools. Bigger names makes slim tools, but Schlumberger, Halliburton and Weatherford use theirs of provide a service, while Signum sells to their wireline competitors, he said.

It would be a plus for their business if unconventional companies were doing more logging, but there are a lot of wells in the world with “troublesome well bores where getting standard size tools to bottom is difficult.”

And Ingerman needs to find an operator willing to let him apply his method of predicting where to find the movable hydrocarbons to enough horizontal wells to show what he can do. The studies will generate curves showing how production levels will likely vary along the wellbore and the brittleness.

Much of the value comes in not spending money on bad rock, which will require convincing users that well logs can ensure they will not be missing anything valuable by skipping spots along the wellbore.