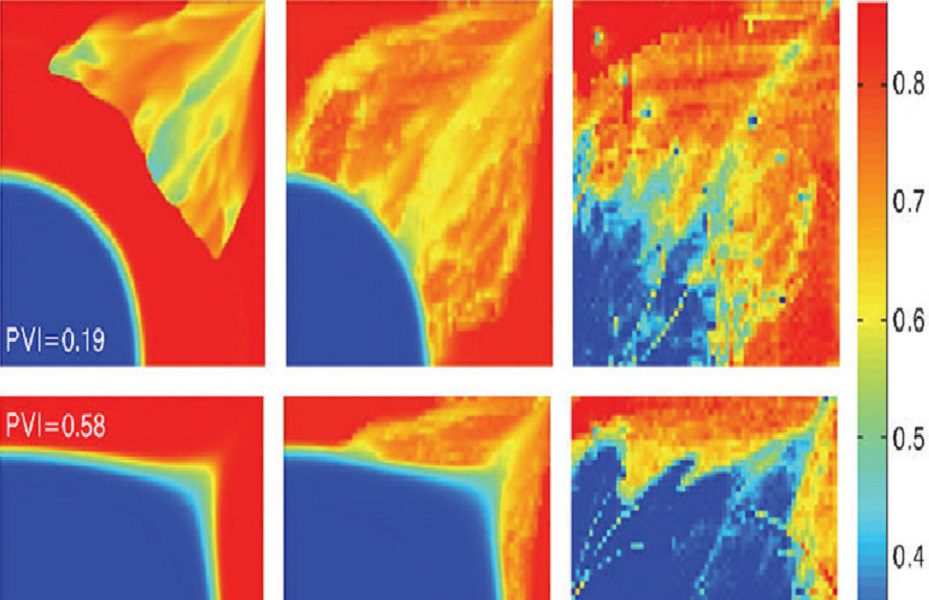 This figure is from paper SPE 182638, “Numerical Modeling of Unstable Waterfloods and Tertiary Polymer Floods for Highly Viscous Oils.”

Benchmark cases are a good thing. They provide a systematic means to compare processes, technologies, and performance that benefits companies, industry, and research organizations. One notable benchmark was deliberated at a 2008 SPE Applied Technology Workshop in the picturesque Belgium town of Bruges.

This particular challenge involved history matching followed by forecast optimization. The goal was to maximize a 20-year net present value (NPV). The results were published as SPE-119094‑PA in 2010. The Bruges study has since become the basis of numerous articles and simulation-based studies and continues to be influential to this day.

Now, almost 10 years later, a new benchmark challenge has been set: Olympus. This has different, but no less challenging, objectives, and the goal is, once again, to maximize a 20-year NPV subject to some stated constraints.

Olympus has been set by Integrated System Approaches for Petroleum Production 2 (ISAPP-2), a research partnership between Delft University of Technology and the Netherlands Organization for Applied Scientific Research (TNO), who originated the original Bruges challenge, along with Eni, Statoil, and Petrobras as industrial partners.

For this, we owe a debt of thanks. Issues identified in the original Bruges exercise have been addressed, and a more streamlined benchmarking procedure has been defined. The ambition is no less broad and can be concisely stated as “field-development optimization under uncertainty.”

The participant must decide how many producers and injectors to drill and where to drill them, along with their operational management during a 20-year production forecast. All this, of course, is addressed in the presence of geological uncertainty.

One can imagine the results will vary considerably in formulation, ambition, and approach. I hope that this will not be considered a winner-take-all competition because that goes against the spirit of such a benchmark. The reward will ultimately turn out to be increased insight and appreciation of new approaches and techniques that will be shared throughout the industry.

So, I humbly request that you consider participating in this challenge. Clear and concise online material is available from the ISAPP-2 website, which also instructs you on how to download model files.

The gauntlet has been thrown down, and I know that we, as an industry, have the wherewithal to pick it up.

William Bailey, SPE, is a principal at Schlumberger-Doll Research in Cambridge, Massachusetts. His primary technical interests lie in reservoir engineering, multiphase flow in conduits, and optimization of expensive functions. Bailey has contributed to 56 articles (27 of which are peer reviewed) and holds 10 patents. He holds MEng and PhD degrees in petroleum engineering and an MBA degree. Bailey has held various positions in SPE, including as technical reviewer for various SPE journals and as a member of the Reservoir Description and Dynamics Committee, and is the chair of the SPE Books Development Committee. He is a member of the JPT Editorial Committee and can be reached at wbailey@slb.com.