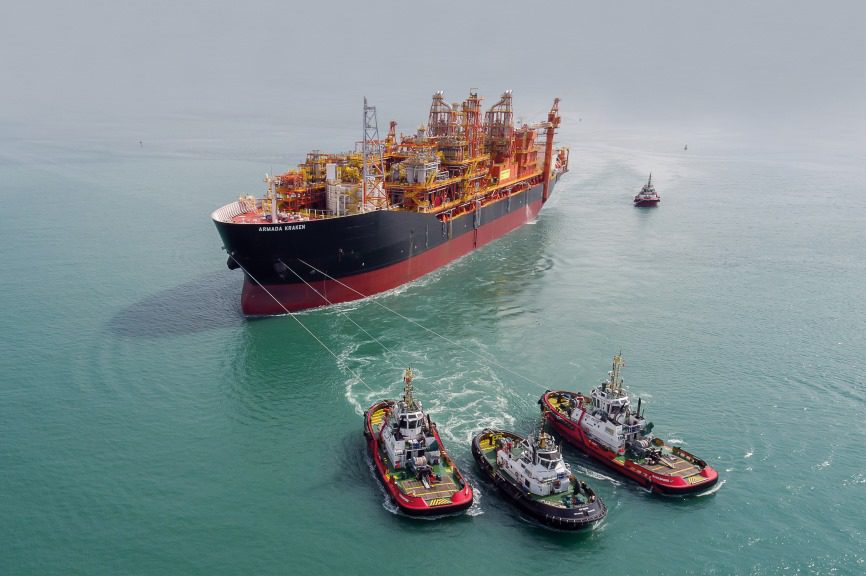 The Kraken FPSO being towed away from the shipyard in Singapore. Source: EnQuest

Located almost 80 miles to the east of the Shetland Islands, the Kraken field holds an estimated 128 million bbl of reserves, according to EnQuest. The independent explorer has so far drilled and completed 13 wells, seven producers and six injectors.

Ramp-up plans call for the wells to be activated in phases to maximize production. Field development is supported by the Kraken floating, production, storage and offloading unit (FPSO), a vessel with the largest liquid handling capacity in the UK continental shelf. The harsh-weather FPSO was designed to operate for 25 years before requiring a dry-dock.

Amjad Bseisu, EnQuest’s chief executive officer, said on Monday that the commissioning of Kraken was “delivered on schedule and under budget” and noted that more wells are to be brought on stream next year.

The field’s initial output forecast of 20,000 B/D “would account for 15% of the year-on-year production growth in the UK in 2017” said Kevin Swann, a research manager at Wood Mackenzie. “We expect production to peak at almost 50,000 b/d in 2019, providing 4.5% of overall UK liquids production that year,” he added.

Discovered in 1987, the Kraken field was passed over for decades due the technical challenges involved with offshore heavy-oil production. A development plan was finally approved in 2013, a year that saw an average price of USD 108 for Brent crude.

In response to the ensuing collapse of oil prices that began the next year, EnQuest reduced the project’s budget by 20% from USD 3.2 billion to USD 2.5 billion.

EnQuest owns a 71.5% majority interest in the field, with partner Cairn Energy holding the remainder of 29.5%.

Chief Operating Officer of EnQuest, Neil McCulloch, is a member of the 2017 SPE Offshore Europe Conference and Exhibition Committee that is being held in Aberdeen, UK. McCulloch will moderate a panel at the conference titled “New Business Models to Address Mature Basin Challenges.”