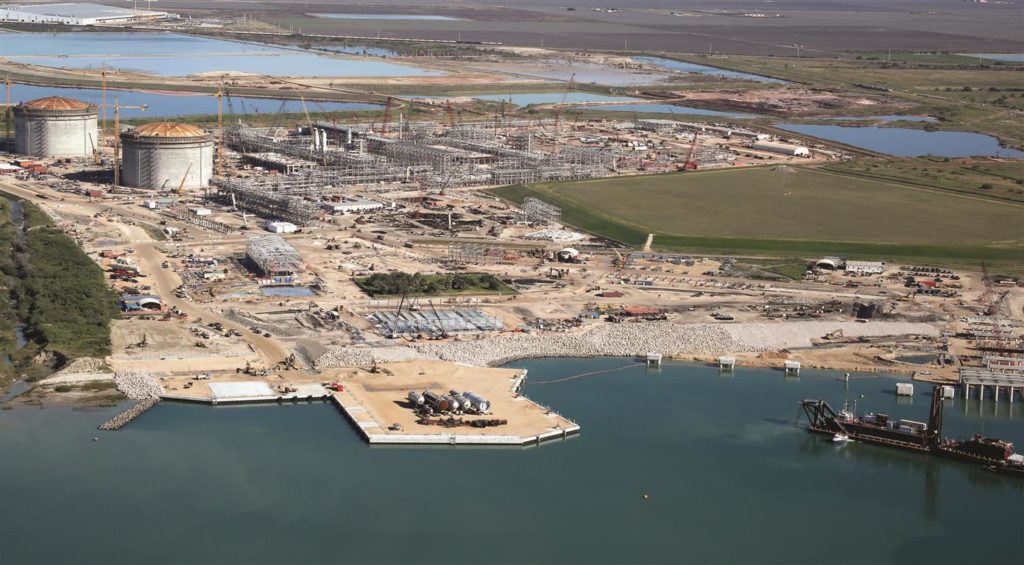 The Corpus Christi gas liquefaction facility spans 1,000 acres in Texas and with its five trains will produce up to 22.5 million tons of liquified natural gas annually upon its scheduled start up in 2018. Source: Cheniere Energy.

The US may become the global leader in liquefied natural gas (LNG) exports, according to a new report by the International Energy Agency (IEA). To ascend to the top spot, US LNG shipments must surpass today’s leading exporters, Australia and Qatar.

In an announcement made on Thursday, the IEA called US LNG a “catalyst for change” and highlighted how production from tight shale gas fields is transforming the world’s natural gas marketplace. The Paris-based organization also said the country’s exports will help fuel economic growth in developing countries.

“The US shale revolution shows no sign of running out of steam and its effects are now amplified by a second revolution of rising LNG supplies,” said Fatih Birol, the executive director of the IEA. “Also, the rising number of LNG consuming countries, from 15 in 2005 to 39 this year, shows that LNG attracts many new customers, especially in the emerging world.

“However, whether these countries remain long-term consumers or opportunistic buyers will depend on price competition.”

China will represent 40% of that growth as its industrial sector takes over as the top consumer of gas, while the US is expected to be producing more than a fifth of global supply. The US is already the planet's top producer and consumer of natural gas.

Much of that additional output will come from the Marcellus Shale play in Pennsylvania, which is set to see gas production increase by a staggering 45%. The IEA says low gas prices will not stop this growth as operators learn to drill more efficient wells with fewer rigs than before.

Even without these new supplies, the IEA says the world is already facing an “LNG glut” that has lowered prices and made countries such as Pakistan, Thailand, and Jordan LNG buyers.

Other importing countries have seen the new supplies result in rigid contracts becoming more relaxed, a change that “will be accelerated by the expansion of US exports, which are not tied to any particular destination,” the IEA said.