US Daily Oil Production To Break Record in 2018

Average total crude oil production in the United States is expected to reach a record level of 9.9 million B/D in 2018, the US Energy Information Administration (EIA) said in its latest forecast.

The projected output would surpass the 9.6 million B/D that the US produced in 1970. Released yesterday, the forecast said that total U.S. crude oil production will average 9.3 million B/D this year, an increase of 500,000 B/D from 2016. 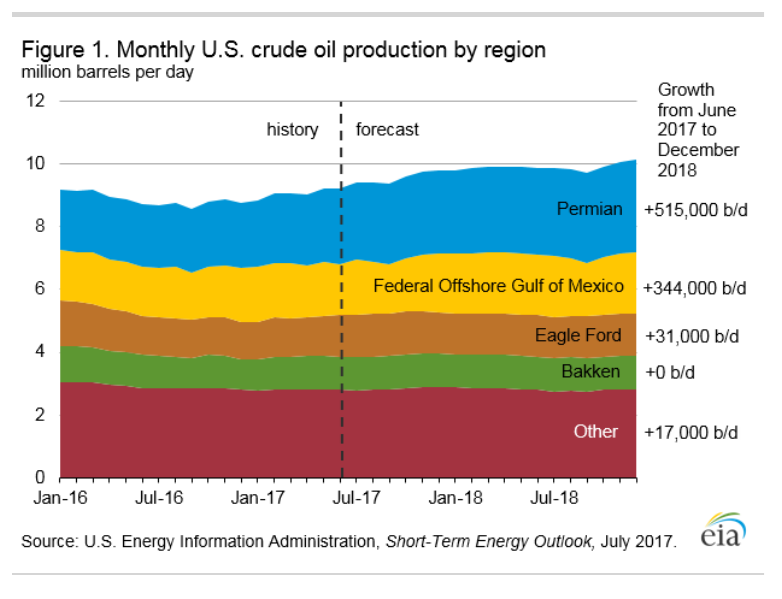 Most of the US production growth from June 2017 through the end of next year is expected to come from tight rock formations in the Permian region of Texas and from the Federal Offshore Gulf of Mexico (GOM).

The Permian region is expected to produce 2.9 million B/D of crude oil by the end of 2018, which is about 500,000 B/D above the estimated June 2017 level and would represent almost 30% of total U.S. production in 2018. The region predominately spans the Permian Basin of western Texas and southeastern New Mexico and covers 53 million acres.

Within the Permian Basin are smaller subbasins, which include the Midland and Delaware basins. All of them contain historically prolific nontight formations and multiple prolific tight formations, such as the Wolfcamp, Spraberry, and Bone Spring formations.

With the large geographic area of the Permian region and stacked plays, operators can continue to drill through several tight oil layers and increase production—even with sustained prices for West Texas Intermediate (WTI) crude below USD 50 per bbl.

According to the Baker Hughes June monthly average rig count, 366 of the 915 onshore rigs in the contiguous 48 states are operating within the Permian region. EIA estimates that the number will fall slightly in the second half of 2017 to 345 at year-end and grow to 370 by the end of 2018.

Based on EIA’s Drilling Productivity Report, Permian-region productivity—measured by new-well oil production per rig in bbl per day—is forecast to decrease month-over-month for the 10th consecutive month in June. The decrease is likely because of operators drilling more wells than they are completing, i.e., casing, cementing, perforating, and hydraulically fracturing wells to prepare for production. These wells reflect drilling activity but not additional output until put on production.

The trend of drilling but postponing completions does not have a clear cause. However, a widening of the WTI-Midland crude oil price discount to the WTI-Cushing [Oklahoma] price since the start of 2017 suggests that there may be some minor transportation constraints. The lags in completions may also reflect an operating strategy of drilling multiple wells from a single pad and not deploying completion equipment until all wells are drilled.

The dynamics related to drilling in the GOM differ from those in the contiguous-48-state onshore regions. Because of the time needed to complete large offshore projects, GOM oil production is less sensitive to short-term oil price movements than US onshore production. Eight GOM projects came on line, contributing to production growth, in 2016. Another seven projects are anticipated to come on line by the end of 2018.

Based on anticipated production at new and existing fields, GOM crude oil production is expected to increase to an average of 1.7 million B/D this year and 1.9 million B/D in 2018.

US Daily Oil Production To Break Record in 2018