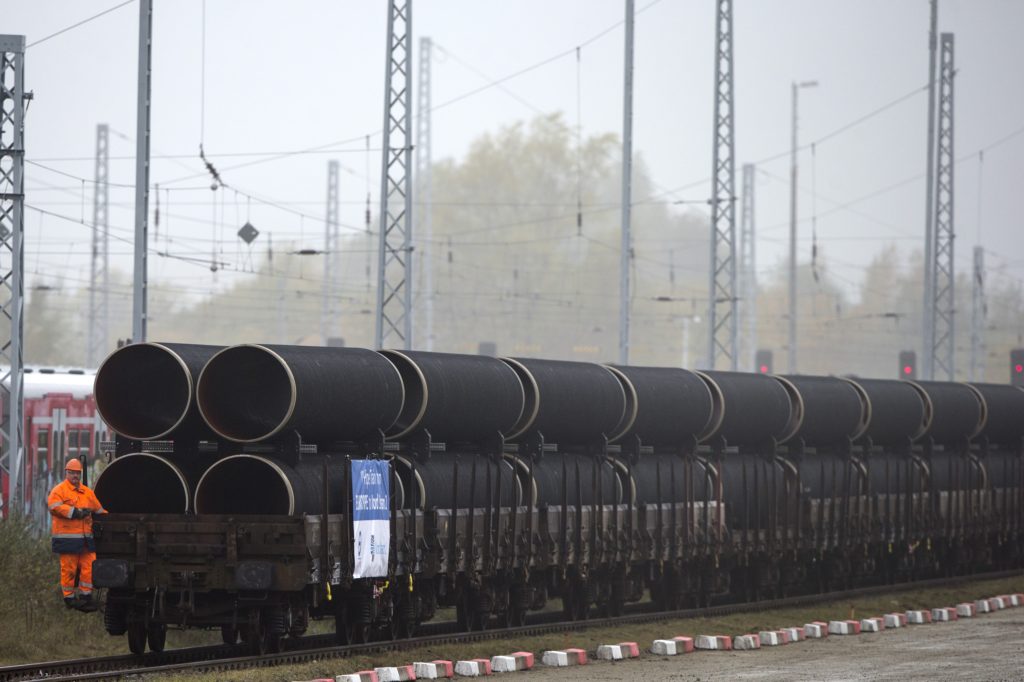 The first pipes for the Nord Stream 2 pipeline were delivered by rail on 27 October 2016 to the German logistics hub Mukran on the island of Rügen. Source: Nord Stream 2/Axel Schmidt

New United States economic sanctions against Russia will place additional restrictions on international companies participating in oil projects with Russian companies. Although he was reluctant to do so, President Donald Trump signed the sanctions bill on 2 August after it had received overwhelming support in both houses of Congress.

The bill’s key provisions that affect the oil industry:

The latest action strengthens sanctions on Russia that President Barack Obama imposed by executive order in 2014 and 2016.

Discussing the just-signed bill in a webinar panel held on 2 August by Stratfor, a geopolitical intelligence consultant, Matthew Bey, a senior global analyst at the firm, noted that the bill’s core aspect was “stripping President Trump’s ability to actually remove sanctions that are already in place.”

Under the bill, it would still be possible for the President to modify or remove specific sanctions, but he would have to go through Congress in a process with little prospect of success.

The newly enacted sanctions are almost certain to create tension between the US and Europe.

Under the previous set of restrictions, the sanctions on new production projects were secondary, thus being optional to apply, and also were implemented within the European Union (EU) as secondary sanctions. That allowed US or EU authorities to grant waivers for companies that had already signed contracts.

The new law moves the US sanctions to primary status, which makes them mandatory. That could call into question a waiver granted to Eni to drill a deepwater well in the Black Sea this quarter, according to Bey. Although allowed to proceed by the EU, the company could face US sanctions.

The move to make the sanctions primary “really caught the Europeans off guard,” Bey said.

As a practical matter, many US companies had already withdrawn from projects in Russia in response to the earlier sanctions.

The provision limiting Russian ownership to less than 33% was adopted as a result of oil-industry concerns that the original Senate bill would have enabled Russian companies to buy minimal interests in various projects globally and force US companies to divest their shares. The limit is high enough to preclude that and allow a substantial number of new projects to proceed. They include Eni’s large Zohr project offshore Egypt, in which Rosneft has a 30% interest.

What is a ‘New’ Project?

The word “new” in new projects is not defined in the sanctions bill and will probably be left to the Office of Foreign Assets Control in the US Treasury Department to define. Nonetheless, by focusing on the Arctic, deepwater, and shale, the sanctions clearly aim to limit Russia’s ability to develop its resources with the greatest growth potential.

“Those are things that also don’t meaningfully impact actual physical supplies,” Bey said. “Remember, one of the big things about applying these sanctions to these longer term projects is they did not want to create a national security concern for Europe in terms of actual supplies.”

Conventional projects are excluded from the sanctions. But as sanction provisions could exacerbate Russian companies’ difficulty in gaining access to hard currency, international companies may be discouraged from taking part in additional projects.

However, the most contentious sanction issue could well be the optional (secondary) sanctions on pipelines. Key projects such as the Nord Stream 2 and TurkStream lines, as well as other projects, are threatened if investor companies or contractors could come under sanctions.

“That is a huge issue, it’s obviously a very divisive issue in Europe,” Bey said. “That is a very long-term, strategic thing that Gazprom and Rosneft are all trying to move on.”

Nord Stream 2 has strong German support but is opposed by countries such as Poland and Lithuania.

Although Europe is not unified about the project, the Europeans dislike US secondary sanctions, seeing them as an extraterritorial extension of US law, Bey said. Historically, the US has only put such sanctions into effect when the countries drawn into them, e.g., those in Europe, already agree with their provisions, as was the case with the sanctions on Iran a few years ago.

Webinar panel moderator Reva Goujon, vice president of global analysis at Stratfor, discussed with Bey the possibility of the US using the pipeline sanctions as a “protectionist” or “America first” means of extending US liquefied-natural-gas exports into Europe by shutting off new Russia-to-Europe pipeline projects such as Nord Stream 2. They drew no conclusion about the likelihood of that happening.

In any event, the panelists, who also included Stratfor Senior Eurasia Analyst Eugene Chausovsky, agreed that the EU is likely to challenge the secondary pipeline project sanctions through the World Trade Organization, should the US start to apply them.