Look out World, The US Is Again a Gas-Exporting Country

LNG tankers like this one will be leaving the US more frequenlty in the years to come according to the IEA. Source: Getty.

For the first time in 60 years, the US is a gas-exporting nation again. Over the first 5 months of the year it exported more gas than it imported, according to a report by the US Energy Information Administration (EIA).

This shift has happened quietly, as did the start of Canadian gas imports to the US back in 1958 with the completion of the TransCanada pipeline.

The net import figure, which subtracts the fast-rising exports of US gas, has been declining rapidly since it peaked a decade ago.

US gas demand has continued to grow but production has risen much faster because of unconventional gas development, which began in the Barnett shale in Texas and took off with the boom in the Marcellus about a decade ago.

Before the boom in the Marcellus, worries about gas shortages in the US led to multiple plans to build facilities to import liquefied natural gas (LNG). Back then, engineers who had settled in the Northeast US wondered about their future.

“We worried 10 years ago how we would keep a job in the Appalachians,” said Joe Franz, vice president of engineering technology for Range Resources, who still lives in Pennsylvania, one of the states that is home to the Appalachian Mountains.

Now he is working to drive down the cost of the growing gas production needed to supply pipelines under construction and export facilities for gas liquids.

While the US still imports more gas from Canada than it exports from that country, there is a pipeline to eastern Canada that includes gas from Texas and surrounding states, which also supply a growing number of pipelines to Mexico.

The changes taking place in the North American gas market are the start of a major shift in the global gas trade, according to a recent report by the International Energy Agency (IEA).

“The United States—the world’s largest gas consumer and producer—will account for 40% of the world’s extra gas production to 2022 thanks to the remarkable growth in its domestic shale industry,” the IEA said in a report issued this week.

Half of the rise in US gas production—which also includes rising gas output associated with liquids-rich plays such the Eagle Ford—will satisfy rising US demand with the balance exported in the form of LNG. 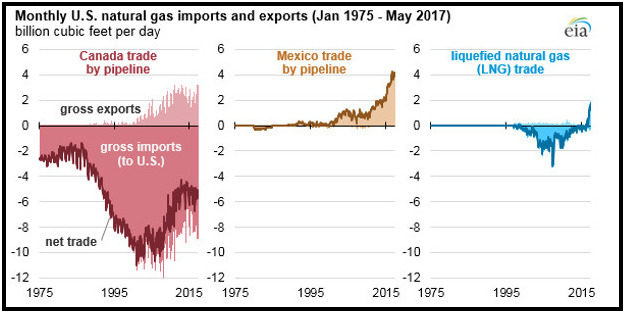 In May, Cheniere Energy’s LNG export facility in Sabine Pass, located at the border of Louisiana and Texas, reached a new high of 1.96 Bcf/D, and that record is bound to be broken this fall when it adds a fourth train to liquefy natural gas, according to the EIA. A handful of other US LNG export facilities have been approved and are under construction, according to the US Federal Energy Regulatory Commission.

Tankers filled with US LNG tankers will be sailing into a slow growing market—1.6%/yr according to IEA—where demand for electric power generation is dampened by growing wind and solar capacity as well as competition from coal.

Adding US LNG “will be a catalyst for change in the international gas market, diversifying supply, challenging traditional business models and suppliers, and transforming global gas security,” the IEA report said.

Look out World, The US Is Again a Gas-Exporting Country