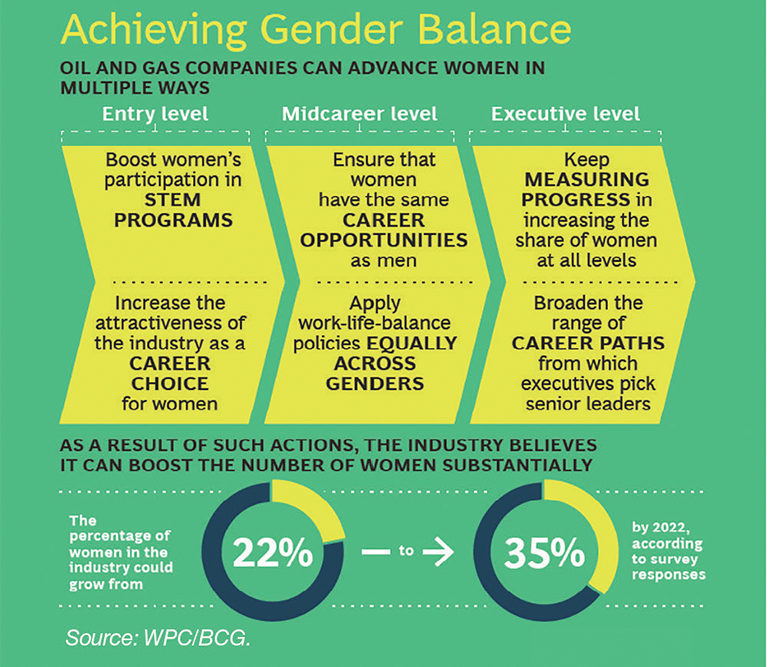 For my thirteenth and final column as SPE president, I saved the subject that I am asked about most often. After every speech, I am asked some form of “the woman question.” What’s it been like to be a woman in the oil and gas industry? How do you manage work/life balance? Are there opportunities for women in our industry? I am the fourth woman SPE president, but it has been 11 years since the last one, making me the only female president of this generation. So, I make a point to be visible to the technical women in our industry and give them my frank perspective on what my journey has been like.

I vividly remember 4 November 1980—as Ronald Reagan was announced as the newly elected US president, I was eating dinner at the old Petroleum Club in Midland, Texas. I was in town for a job interview, and it was the first time I had dinner with a table of executives who were evaluating me. The club was about to move from the old mansion to a modern facility, but the Petroleum Club was still stuck in the past—women were not allowed to join. I had just turned 21, had a month until I graduated with my petroleum engineering degree, and was ready to embark on my long career. I thought that the 1970s women’s rights movement had changed the workplace for all of us and that the “gender wars” were over.

What is it like to be a woman in a male-dominated industry?

I can’t think of any profession that isn’t male-dominated, except perhaps nurses, teachers, and social workers. Most workplaces are predominantly male, so women must learn to work within that environment. Women in the oil industry must be at least as—and usually more—competent than their male colleagues. To succeed or even just survive, we must learn to speak “their language” and act in a more “male way” at work. I believe that is where the stress comes in, where women must constantly shift between their more “female” socialized roles at home and a more “male” work environment—much like speaking one language at work and a different language at home. The switching gets easier, but it’s never completely seamless.

Why is the oil and gas industry so hard on women?

It’s not just my opinion that the oil industry is significantly harder on women than most other industries; studies prove it. McKinsey & Company and LeanIn.org partnered in a comprehensive study of the state of women in corporate America, Women in the Workplace 2016.

For the “energy and basic materials” industry group, women are only 35% of entrants (women are only about 20% of US engineering graduates). Only 14% of executives are women. In my experience, almost all those women executives are in roles such as human resources, finance, legal, and supply chain management. Even in industry groups where entry gender is evenly split (such as law, accounting, media/telecom, and retail) or dominated by women (fashion, hospitality), all industries had 25% or fewer women executives. Lack of women in leadership is a societal problem, not unique to the oil and gas industry.

The McKinsey/LeanIn studies focus on North America; the imbalance is more pronounced in other parts of the world. I am still surprised at how few women oil and gas business leaders I see in Europe (outside of Scandinavia) and very, very few in other parts of the world. Just this July, the World Petroleum Council and Boston Consulting Group (WPC/BCG) released a comprehensive study on women in the oil and gas industry, Untapped Reserves: Promoting Gender Balance in Oil and Gas. It’s an excellent report that I highly recommend you read.

How can women get ahead in this industry?

The same way as men: Do an excellent job, build your skills, impress someone high up with your ability, and have that person sponsor your upward mobility. The issues are that women are rarely sponsored by those in power (almost always men) and, in my experience, are held to higher standards and pay a higher price for mistakes. Then there is also the double-bind problem—the same behaviors that are valued in men are viewed negatively in women.

A key study on the double-bind (or lose-lose situation) for women was published by Catalyst.org in 2007. Catalyst, a global nonprofit that accelerates women’s progress through workplace inclusion, outlined three predicaments that undermine women’s advancement options.

In my experience, all three of these unconscious biases exist in the oil industry, and apparently in most other industries as well. It’s not fair, but it is reality. Awareness helps, and women can practice shifting between “masculine and feminine” communication styles to walk the balance.

How can I manage dual-career issues?

Over the years, I have found that couples tend to manage dual careers either by picking a city or a company. With a city, both decide to work in the same place, realizing that their upward trajectory is limited if they aren’t willing to move. Others pick a company—both work for the same company and move around together. Many couples are not comfortable relying on one employer for both careers—and with our industry’s history of layoffs, can you blame them?

However, a time will come, somewhere mid-career, when one spouse quits full-time work while the other climbs the corporate ladder. I know both women and men who quit to support their executive spouse. Often, they don’t quit work entirely, but move to a more flexible alternative while the climbing spouse stays with their corporate employer. In my experience, it is extremely rare for a high-level executive, male or female, to have a working spouse.

How do you manage work/life balance?

This question is usually a coded reference for “how do you manage your second job at home?” Most women have a second job because all studies show that even full-time working women with nonworking husbands still do most of the work at home. Life is full of compromise, not perfection. Plan for the important things, do the chores you enjoy (I like to cook), pay someone else to do the unimportant things, and let go of perfectionism.

I don’t believe there is work/life balance; rather, there is work/life compromise. Sometimes (OK, usually) work takes precedence and sometimes family takes priority. Most modern supervisors are flexible about employees taking off for a child’s weekday event because we can all make up for the work at home. But beware: The higher up the ladder, the less work/life balance you will have. When you manage operations or a large team, your employees expect you to be available 24/7. That’s another reason I actively promote the technical career ladder (vs. the management career ladder) for better work/life balance for both men and women.

The WPC/BCG study offered several recommendations, which I won’t list here because you can review the report if you are interested. It’s all about accountability by business leaders, not delegation to human resources or diversity professionals.

We can change the future for diversity because we proved we could improve safety programs. In the 1980s, safety was the responsibility of the safety man. Injuries and fatalities were just part of life in the oil field. The dual tragedies of Piper Alpha and Exxon Valdez changed all that. Now, safety is an accountable metric for all business leaders, and our industry safety performance has improved very dramatically. Visible metrics and accountable leaders make a difference.

It can be the same with diversity. Development of people should be an accountable metric for all business leaders. Every male leader should mentor at least one high-potential female. Women leaders should not be expected to mentor all the women. Diversity should not be concentrated in staff support roles such as human resources, finance, and legal.

Visible metrics and accountable leaders can change the face, literally, of our industry. I regret that it didn’t happen in my generation.

It has been my privilege to be a member of SPE for 40 years and to serve as your 2017 president. Thank you for letting me represent you to the world.