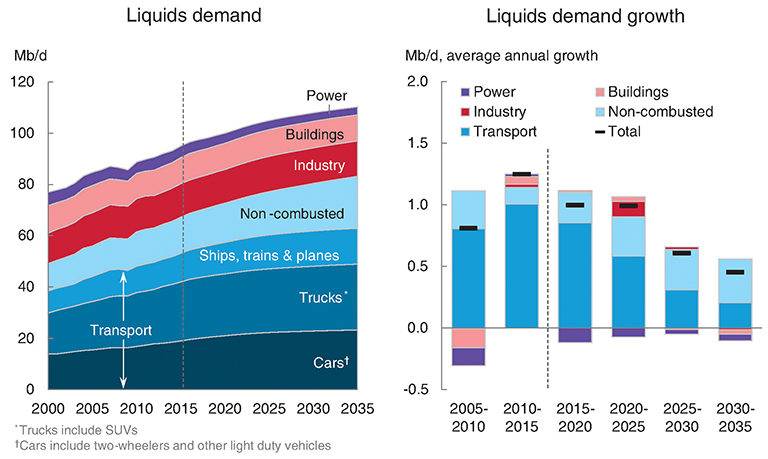 Transportation is the linchpin of oil consumption, responsible for more than 50% of the oil that the world uses every day and almost 70% of that consumed daily in the United States. Forecasters all agree that the global vehicle fleet, the dominant factor in transportation demand for oil-based fuels and the major source of transport-sector growth, will expand greatly in the next 20 to 30 years.

Thus, it is notable that BP in its 2017 Energy Outlook forecasts, as a base case, that by the mid-2030s, transport demand growth for oil will slow to a trickle, while demand for noncombusted oil use—particularly in the petrochemicals industry—will become the chief driver of oil demand growth.

Not every forecast agrees with this. The International Energy Agency and ExxonMobil, for example, believe that transport demand will continue to drive oil consumption growth for substantially longer. On the other hand, Shell Chief Executive Officer Ben van Beurden recently said that oil demand as a whole could peak in the early 2030s and possibly sooner with higher biofuel use. There are forecasts from outside the industry that show oil demand peaking and starting to decline sooner rather than later.