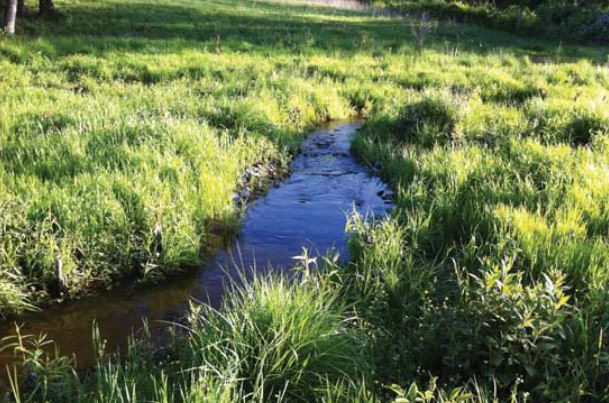 A stream restored by the company in Conway County, Arkansas. Source: Southwestern Energy.

Southwestern Energy has become freshwater neutral as an operating company, making good on a corporate pledge to reduce fresh water use and replenish all fresh water used, explained Rowlan Greaves, a manager on Southwestern’s strategic solutions team, to a meeting of the SPE Gulf Coast Section’s Northside Interest Group.

The water initiative began with a 2013 commitment by Southwestern’s then-CEO Steven Mueller that the company by 2016 would offset its freshwater footprint barrel for barrel through conservation projects in an economically feasible manner that provides value to communities neighboring the company’s operations and to the environment.

The team on which Greaves serves has been responsible for spearheading the initiative by setting annual goals and working with operations to achieve them. “It doesn’t get done without operations,” he said.

Southwestern continues to use fresh water. It remains critical in company operations and is particularly so for any company developing unconventional oil and gas, Greaves said. But the initiative centers on offsetting its use whenever possible by using alternative water, which includes produced water and recovered fracturing water.

“It is important to understand the valuable contribution of alternative water and the things that alternative water can do for you,” he said, citing its potential for enabling cost reductions and improvements in operational practices.

Offsets in some cases may involve providing alternative water to neighboring operators to use instead of fresh water.

Southwestern has reduced its need for freshwater supplies by recycling 100% of its recovered fracturing water for reuse in fracturing operations. It has also built an extensive water collection and transfer system for its field operations to reduce the need for water from public sources. Rainwater is collected and retained in storage ponds for use in operations.

In addition, Southwestern has identified and is using friction reducers that are compatible with lower-quality water. This has led to a reduction in freshwater use and lower water costs, with no added expense for the friction reducers and no decline in well performance.

The company is also sustaining freshwater resources through community conservation projects that involve the restoration of watersheds or aquatic habitats or improving water use efficiency.

“We target these in our operating divisions,” Greaves said. “We want to make sure that we’re providing something lasting in the same communities that see our work.”

The company has fully funded and built passive systems to treat acid mine drainage in the Fall Brook tributary of the Tioga River in northeastern Pennsylvania. Pollution from abandoned mining operations has virtually eliminated aquatic life in these waters, which the project will ultimately restore to allow them to be stocked with trout.

In Arkansas, a Southwestern project has restored 135 acres of habitat with almost 8,000 linear feet of streams to historical conditions in a federally protected area that will ensure preservation in perpetuity.