Operators Share Frac Schedules To Know When Wells Are at Risk 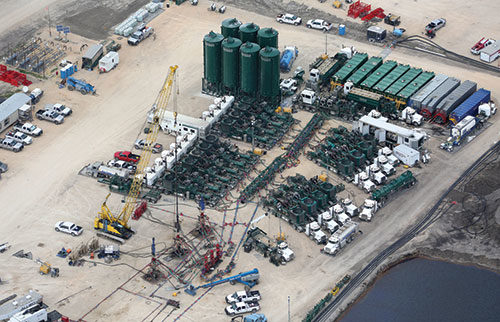 Concern about frac hits have led operators in the Permian Basin to begin sharing information on when wells will be fractured near their operations.

The Permian Operators Frac Schedule Exchange Consortia has 23 companies reporting when and where they are fracturing wells so that operators can decide if they need to take precautions.

Pioneer was motivated to create the group because “we are neighbors for everyone,” said Gervasio Barzola, vice president of strategic planning and field development for Pioneer’s Permian Asset Team.

Ultimately, the company asked competitors in the eastern half of the Permian Basin if they would be willing to regularly share fracturing schedules, and a handful of companies agreed.

The exchange has grown to 23 companies, with only a couple holdouts in the Midland Basin, Morrison said. In March the consortia held its first member meeting, which approved changes to streamline the reporting process and add data on the depth of wells fractured.

Reports submitted every other week from member companies are combined on spreadsheets accessible to members. Pioneer uses the information to create a digital map for operating teams showing how far producing wells are from those being fractured. It helps asset managers decide if their company needs to take steps to defend their wells, which include many older vertical wells.

For example, Pioneer uses high-pressure stuffing boxes to seal the annulus between the tubing and the rods of the rod pump used for artificial lift. That seal ensures that a vertical well on rod pump that might be affected by fracturing in a nearby well will not leak fluid out of the tubing/rod annulus.

As the group grew, so did the time required for data management. What began as a couple of hours taken to compile the emailed reports grew to a project requiring the better part of a day, Morrison said.

The process has recently been automated. Member companies now file reports using a standardized Excel spreadsheet found on a password-protected FTP site. As a result of those changes, “what took 7 to 8 hours took 20 minutes to do,” Morrison said.

The group also created an emergency contact list so field hands can call if things are not according to plan.

Companies have requested that a similar information sharing organization be created in the Delaware Basin.

In Pennsylvania, the state Department of Environmental Protection is considering a regulation that would require companies to post notices when fracturing is planned, now normally provided by neighboring operators as a courtesy, said Joseph Frantz, vice president of engineering in the Marcellus for Range Resources. He said the experience of the Permian operators could be helpful for his region.

Operators Share Frac Schedules To Know When Wells Are at Risk