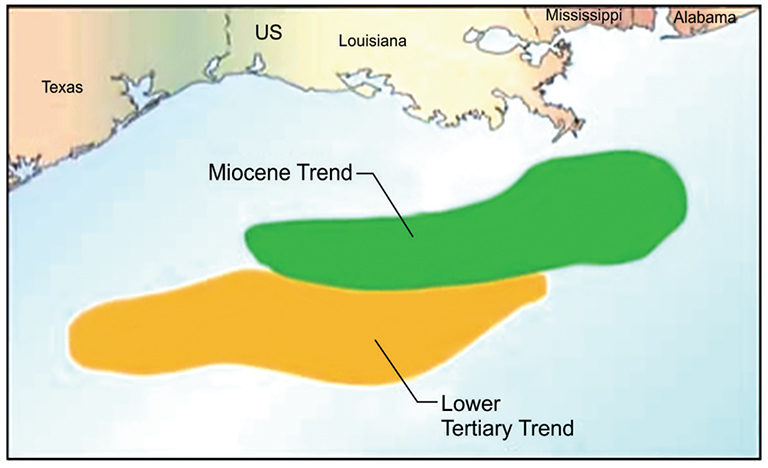 Lower Tertiary and Miocene trends in the GOM.

This paper provides perspective on the current state of multizone completion technology and issues encountered in the industry with developing a system that offers increased capabilities to meet the increasing challenges presented by the Lower Tertiary in the Gulf of Mexico (GOM). The multizone technology has proved to be an enabler for cost-efficient completions in the shallow-well environment and in the high-cost ultradeepwater environment requiring high-rate fracture-stimulation treatments.

The Lower Tertiary play is south and west of the Miocene area in the GOM and is, consequently, in deeper water. The Lower Tertiary is located approximately 175 miles offshore and is estimated at 80 miles wide and up to 300 miles long. Water depths are from 5,000 to 10,000 ft. Production targets are at depths of 10,000 to 30,000 ft subsea.

The Tertiary trend is from 66 million to 38 million years old. Within the Lower Tertiary, the Lower Wilcox portion presents sheet to amalgamated-sheet sands considered to be part of a regional basin floor fan system.

The Late Paleocene to Early Eocene (Wilcox equivalent) reservoirs are considered to be laterally extensive sheet sands that were deposited in deep water. These reservoirs are distributed across an area largely covered by the allochthonous Sigsbee salt canopy. It is this canopy that causes additional problems beyond merely the water depth and the well depth required to reach the reservoirs.

These exploration plays depend on understanding the updip fluvial/deltaic stratigraphic architecture and the potential for partitioning of reservoir-quality sandstones across the depositional shelf into the slope and basin floor environments. The Lower Tertiary is estimated to contain up to 15 billion bbl of oil.

The Generation IV multizone system has been deployed successfully in the Lower Tertiary by multiple operators. To the authors’ knowledge, the multistage completion system and enhanced single-trip multizone fracturing systems had been installed in 10 wells as of the summer of 2015, with additional well installations planned. These systems are rated to 10,000 psi, and the enhanced single-trip multizone tool system offering an openhole variant was installed in one five-zone completion.

One of these systems was qualified with a fracturing rating of 45 bbl/min and a proppant volume per interval of 750,000 lbm or a maximum of 3,750,000 lbm for five intervals. The majority of intervals pumped, to date, have been placed in the 35-bbl/min range, while proppant volumes continue to increase, with more than 2,000,000 lbm placed in one three-zone completion.

The initial completion focus was on the immediate challenges of the sandface completion. Operators are now trying to maximize hydrocarbon recovery with downhole flow control. Accomplishing downhole control requires interval control valves (ICVs) rated to 15,000 psi. Because of the outside diameter of the large-bore valves, the two valves are run in tandem (with the lower valve shrouded) and both are placed above the sandface assembly. This ICV configuration provides interval selectivity for two producing intervals. In the Lower Tertiary, the tandem ICV configuration allows separation and control of the lower and upper Wilcox Formation. Qualified ICVs rated to the 15,000-psi working pressure are nearing commercialization.

One of the initial challenges of the Lower Tertiary was to deliver a single-trip 10,000-psi-rated multizone completion system that met the following requirements:

The initial sandface challenges were resolved with the first successful multizone-system deployments. As operators began to explore future development prospects in their lease portfolios, additional challenges were identified. The new challenges will require an increasingly robust multizone system.

Optimally, a larger-ID casing would be installed across the reservoir. This would allow equipment designers the latitude necessary to meet higher pressure requirements with the desired burst and collapse safety factor at temperature while maintaining the desired fracturing-rate capability, increased proppant volume, and increased production and injection rate. Instead, the 8.5-in.-ID drift casing requires equipment designers to use a balanced design approach to meet the Lower Tertiary requirements with a minimum number of trade-offs.

The following factors, described in detail in the complete paper, should be considered when designing or evaluating the next-generation multizone systems for the requirements of the Lower Tertiary:

Several criteria drive the requirement for a 15,000-psi-rated multizone sandface assembly. The first is experienced during installation of the fracturing stimulation. If a hard screenout exceeds the maximum pressure limit of the gravel-pack assembly (from below), a collapse pressure will be applied on the completion kit from the gravel-pack ported sleeve to the top of the screen. This could lead to a collapse of the external components, resulting in either a breach in pressure integrity or the item collapsing around the inner string and causing sticking of the service-tool assembly.

The second criterion is caused by pressure depletion of the reservoir. In the current completion scenario (Fig. 1), all zones are flowed to an inner string in a commingled flow pattern. The completion is not designed with the ability to shut off one interval while producing the remaining intervals. In this configuration, differential pressure between producing intervals is not an issue. The addition of an intelligent-well kit that enables flow control of two or more intervals highlights the issue of pressure depletion between intervals. In a tandem ICV configuration, the valves are placed above the top sand-control packer to control two intervals. The differential forces will act against the internal string and stinger seals, the isolation-packer assembly, and the ICVs in a two-zone system. When ICVs are installed adjacent to each producing interval, the differential forces act against the stinger seals, the ICV, and the inner isolation string.

The third criterion is related to fracture geometry. If the fracture treatment does not create vertical height growth, it is possible that the reservoir section adjacent to the unperforated casing between zones will remain at original pressure. This will result in future drilling issues when additional in-field wells are drilled. An openhole multizone completion could be considered as a viable completion methodology that would potentially eliminate the virgin-pressure issue.

Designing the next generation of multi­zone systems (Generation V) will be challenging, from not only a drilling perspective but also a completion perspective. An operator or a group of operators should clearly define the requirements of the next-generation system to the service providers. This definition should include mandatory and optional features, with the understanding that not all features can be included in a single system.

Generation V multizone systems will require time to develop. They could be included in the new high-pressure/high-temperature annex if the tools are rated at greater than 15,000 psi, and this will necessitate additional testing, validation, and lead time. The requirements established at the beginning of the design process will have to be acceptable for several years to accommodate rigorous development activities. As requirements for the Lower Tertiary change and become more challenging, the industry should revisit every aspect of the well, from spud to landing the tubing hanger.

It is not unreasonable to consider a 3-year development time for these systems, which would mean that an established set of parameters in mid-2016 would result in equipment deliveries in late 2019 or early 2020.

This article, written by JPT Technology Editor Chris Carpenter, contains highlights of paper OTC 27183, “Current State of the One-Trip Multizone Sand-Control-Completion System and the Conundrum Faced in the Gulf of Mexico Lower Tertiary,” by Bruce Techentien, Tommy Grigsby, and Thomas Frosell, Halliburton, prepared for the 2016 Offshore Technology Conference, Houston, 2–5 May. The paper has not been peer reviewed. Copyright 2016 Offshore Technology Conference. Reproduced by permission.

This paper discusses a probabilistic flux and erosion model and work flow that extend the ability to estimate inflow through sand screens on a foot-by-foot basis along the wellbore using the well's completion details, production rate, and reservoir and bottomhole flowing pressures.

In 2014, a research and development (R&D) project was initiated to increase the life expectancy of Gulf of Mexico (GOM) Miocene and Lower Tertiary water-injection (WI) wells, several of which had suffered a severe loss of injectivity within only a few years of completion.

Digital Transformation at BP is Starting to Add Up to Billions

Analytics, sensors, and robots are changing the way one of the world’s largest oil and gas companies does business. Underpinning all the new technology though is a shift in how BP thinks, and what it means to be a supermajor in the 21st century.