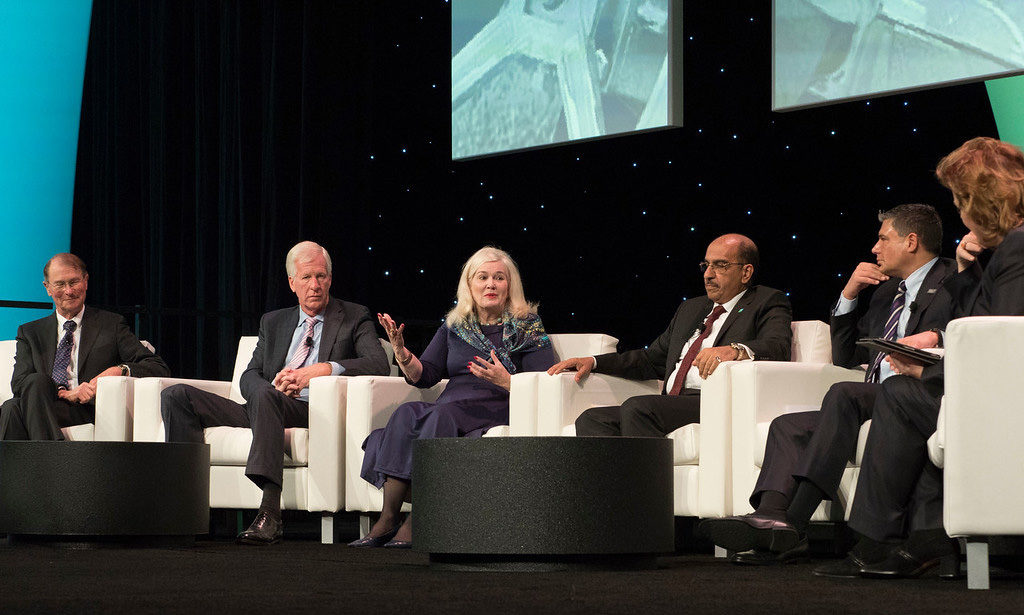 SPE’s annual meeting opened Monday morning with a look at the economic and environmental sustainability of the oil and gas industry.

Five panelists discussed “Sustainable Oil and Gas: Improving People's Lives” in front of a packed ballroom at the opening session of the Annual Technical Conference and Exhibition (ATCE) in San Antonio, Texas. The panel was moderated by Eithne Treanor, ETreanor Media, and comprised Franklin Orr from Stanford University; David Hager, president and CEO of Devon Energy; Lorenzo Simonelli, chairman and CEO of Baker Hughes, a GE company; Khaled Al-Buraik, vice president for Saudi Aramco; and Deborah Wince-Smith, president and CEO of the Council on Competitiveness.

Tackling the challenges of sustainability, Hager said, requires creativity. “Creativity is at the heart of everything we do,” he said. He added later, “To do things tomorrow the way we do things currently is not going to provide the sustainability we need.”

Simonelli built on the idea of creativity by including the concept of disruption. “I think, as an industry, we’ve got to embrace disruption,” he said, adding, “How do we embrace that disruption and change much faster?”

Economically, the panel suggested that the future of natural gas is secure because of its use in electricity generation. Future uses of oil, however, may need to be reconsidered in light of advancements made in electric vehicles. “We’re trying to reduce the percentage of oil in the fuel sector, transportation sector,” Al-Buraik said, adding that oil will be used increasingly as manufacturing feedstock. “This will continue the sustainability of the industry,” he said.

The panel began its discussion by pointing out that the digital revolution and management of the data collected are key drivers toward sustainability. “We can really revolutionize the way we think about this, using sensors and data,” Orr said. “We are entering sensor world.”

The challenge, however, is to make the vast amounts of data useful. Orr spoke of the role of universities in addressing that challenge. “We need to do a deeper investment ourselves in understanding how to sense, manage, and optimize very complex linked systems of systems.”

The light of the digital revolution, the panel noted, while feeding innovation, also casts a shadow. “The shadow, of course, is cybersecurity,” Wince-Smith said. “I think this sector, in particular, is very, very vulnerable and we should talk about that.”

Another challenge addressed by the panel is the continued recruitment of talent. “There just is a huge opportunity space here,” Orr said, “for smart young people to join us in the challenge of making a cleaner world energy system that meets the needs of all Earth’s people.”

Building on the idea of a cleaner energy future, Orr addressed climate change. “The evidence for human-induced climate change, in my view, is incontrovertible,” he said. “The only remaining questions are how much and how fast.”

Working toward a lower-greenhouse-gas future, as Orr suggests the industry should, involves managing carbon dioxide (CO2).

“We’ve been doing carbon capture and storage since the early 1970s,” Orr said. “I think the question really is: Can we do this at scale in a way that makes a difference for greenhouse-gas emissions? I think the answer to that is yes. That’s different from the question, will we do this at scale? Right now, the only market of any size for CO2 that we capture is for EOR [enhanced oil recovery]. In a world with no price on carbon, I think it’s modest that we’ll continue to work on details. Can we do it? Yes. Will we do it? Still uncertain.”