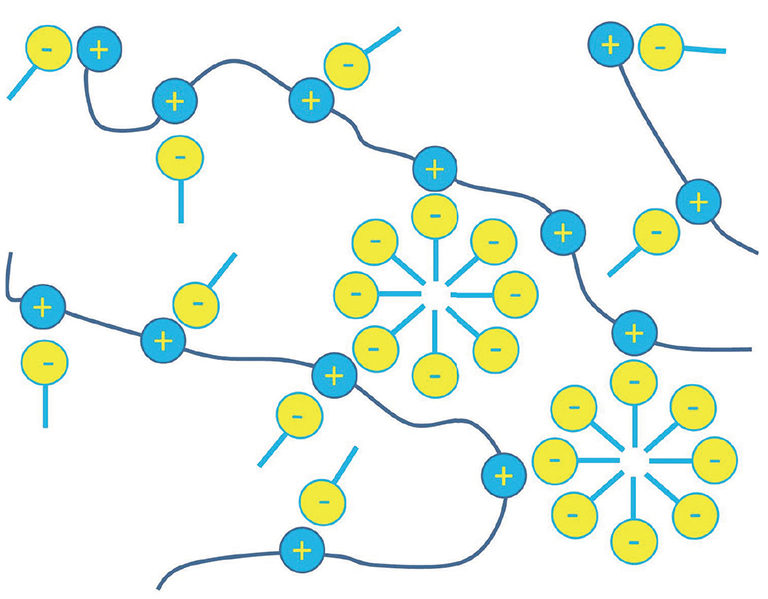 Fig. 1—Generalized illustration of the association of a polycation with an anionic surfactant. In the case of the brine viscosifier described here, the blue structures are Polymer A and the yellow structures are the surfactant.

Many viscosifiers currently used in high-density solids-free reservoir drilling fluids (RDFs) and completion fluids (CFs) are incompatible with high-density brines or require the use of prohibitively expensive brines to achieve target densities. There is substantial commercial benefit to developing a brine viscosifier with a higher temperature tolerance than is currently offered. A supramolecular viscosifier package has been developed that uses noncovalent associations between additives to enhance the thermal resilience of divalent brine fluids. Static aging-test data indicate that the supramolecular viscosifier outperforms high-performance, commercially available starch/xanthan brine viscosifier.

The exploitation of oil and gas reservoirs found at increasing depths and the development of horizontal and slimhole drilling have increased the demand for high-density solids-free RDFs, CFs, and workover fluids (WFs). The use of divalent brine-based drilling fluids and CFs in well sections with temperatures exceeding 260°F is limited because of degradation of the polymers used to viscosify the fluid and suspend drill cuttings.

Effective drilling fluids have numerous functions in well construction. They must have the physical properties required to carry cuttings from beneath the drill bit up the annulus of the well for separation at the surface. They must also provide cooling for the bit and be able to reduce friction between the drillstring and the formation being drilled. This must be accomplished without damaging the formation. The inflow of fluids or solids from the drilling mud can cause formation damage, which can reduce the rate of penetration during drilling and can also decrease the rate of hydrocarbon production from a producing well.

This article, written by JPT Technology Editor Chris Carpenter, contains highlights of paper SPE 183964, “High-Performance Brine Viscosifiers for High Temperatures,” by Peter J. Boul, Suhaib Abdulquddos, and Carl J. Thaemlitz, Saudi Aramco, prepared for the 2017 SPE Middle East Oil and Gas Show and Conference, Manama, Bahrain, 6–9 March. The paper has not been peer reviewed.
...
This article is reserved for SPE members and JPT subscribers.
If you would like to continue reading,
please Sign In, JOIN SPE or Subscribe to JPT

This paper describes a high-pressure/high-temperature (HP/HT) expandable liner hanger product that offers metal-to-metal and elastomer sealing capabilities at the liner top in the host casing.

One would think that, in these challenging times, high-pressure/high-temperature technology and projects would be put on the back burner, with everybody chasing zipper-fractured barrels from shale. Well, it is not so.