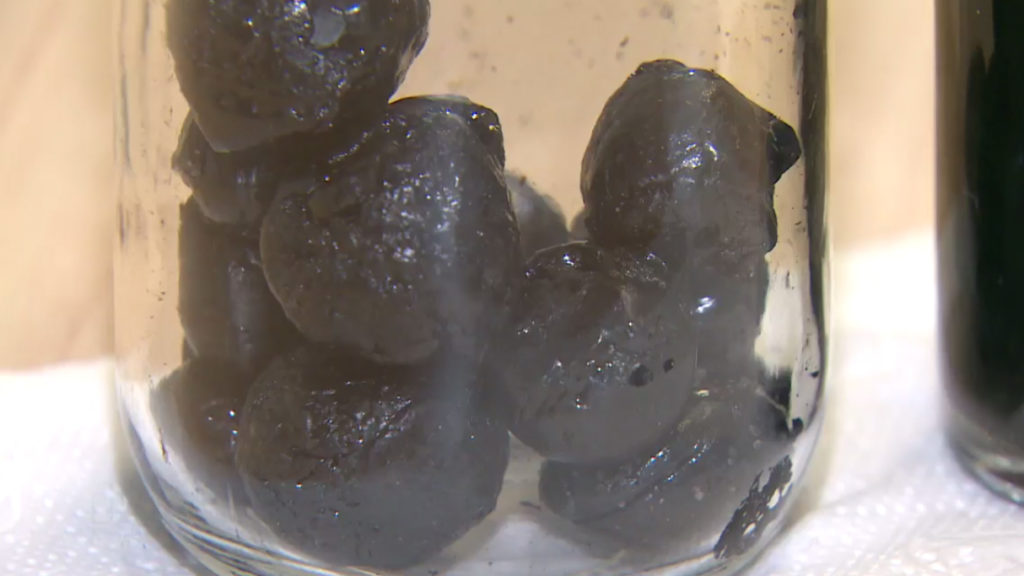 Bitumen pellets in a jar. Developed by researchers at the University of Calgary, the pellets may reduce the environmental and safety risks of transporting bitumen and heavy oil. Source: CBC.

Researchers at the University of Calgary have developed something that may have a significant impact on the transport of heavy oil, and it is the size of a pill.

The discovery in question is a pellet, self-sealing with a liquid core of either bitumen or heavy oil within a super-viscous, semisolid or solid skin that reduces the chance of a damaging spill during transport. The pellets can be designed to be buoyant and safe if they are spilled into the environment by incorporating agents within the pellets, like gas bubbles, catalysts, and solvents. Their outer coating is unreactive, making them much less likely to cause environmental damage than a liquid heavy oil or bitumen spill.

Once shipped, the pellets can be rendered back to a liquid state—either liquid bitumen or heavy oil—by using a light oil of 40 °API that is produced as a side product during the pellet’s creation process.

In an interview with a Canadian radio station last month, Ian Gates said he discovered the technology through a fluke. Gates, a professor of chemical and petroleum engineering at the Schulich School of Engineering, said that he and other researchers were trying to find a way to lower the viscosity of bitumen in order to reduce the amount of diluent needed to transport it through a pipeline. In doing so, they accidentally degraded the bitumen to an extremely high solid state.

“Initially, we wanted to go the other direction,” he said. “When you think of bitumen, you think of peanut butter, a quite viscous material. We’re always thinking about how we can get it down in terms of viscosity. We wanted to get it to the level of olive oil, but what we found was that we can turn it into something near plastic, get it into a super-viscous state. What we also noticed was that, when we did that, we did it on the surface of the bitumen, so then it started to occur to us that, hey, maybe we could build these particles that have these solid walls around them.”

Innovate Calgary, the university’s technology and business incubation center, helped support the research and develop the product into something commercially viable. Stace Wills, vice president of energy at Innovate Calgary, told the Canadian Broadcasting Corp. that the center was able to connect Gates with potential industry customers capable of advancing the technology to a field trial.

Gates said last month that the pellets could be shipped in idle railcars formerly used for coal, and that they probably will not replace pipelines as a means of shipping large volumes of heavy oil. However, they should provide an additional means of transport and reduce the need for additional pipelines.

The pellets should be ready for pilot-scale production by November, and in the next year that production should increase to as many as several hundred barrels per day.

Hard Times in Canadian Oil Could Be Useful Experience

Its reward for years of struggling to adapt to low prices and weak demand for its oil and gas has been an epic crash. Canadians selling change say it is time to consider possibilities that seemed inconceivable in the past.