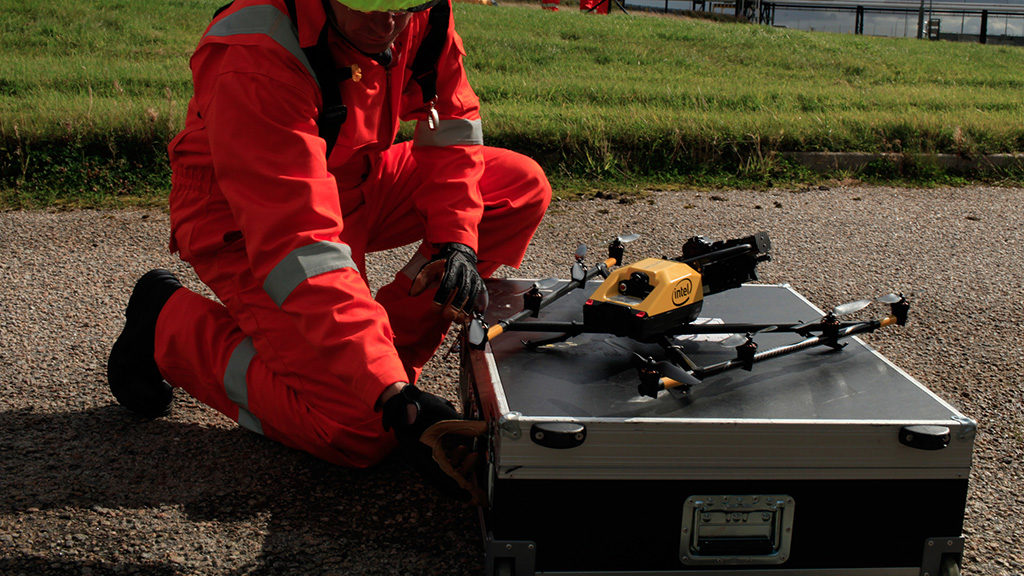 Intel and Cyberhawk, a company that uses drones for asset inspection, released a case study in which commercial unmanned aerial vehicle (UAV) technology helped automate an existing oil and gas inspection workflow within a live structure.

The study involved the successful inspection of a gas terminal in St. Fergus, Scotland, with the Intel Falcon 8+, a drone designed to provide unobstructed data capture for 3D reconstruction. The Falcon 8+ captured 1,100 images, translating to 12 GB of data, over the span of 2 days. The data could be used for asset maintenance including premaintenance inspection, repair work, resource planning, and maintenance prioritization.

Intel said a typical manned inspection would have required three people to gather data over the course of 3 days. A facility shutdown would have been necessary, which would have required several days to bring the facility offline and make it accessible to workers. In addition, these workers would have relied on harnesses and cable equipment to hang midair while manually collecting information on the structure. Cyberhawk estimated that such manned inspection could cost operators between $1 million to $5 million in lost production during the downtime.

“The way we conduct inspections is changing,” Anil Nanduri, vice president and general manager of Intel’s New Technology Group, said in a statement. “Drones make inspection workflows faster, cheaper, and safer. The technology is mature enough to be adopted into the workflows of our customers.”

Intel first announced the drone’s launch in late 2016. It became available for commercial use in the United States in Canada last May, and it was made available in Europe in September after receiving CE certification (a mark indicating “European Conformity” with specified standards).

Cyberhawk had previously used the Falcon 8+ and its predecessor, the AscTec Falcon 8, to inspect facilities in the UK North Sea. The company has completed projects for more than 50 oil, gas, and petrochemical companies since its founding in 2008. It completed the first remotely operated aerial vehicle live flare inspection in West Africa, and it used drone technology to produce a Material and Corrosion Damage Report of flare stacks, platform elevations, walkways, splash zone, and the underdeck of a North Sea platform.

“In the last 20 years that I’ve worked in the inspection industry, drones are the biggest single change we’ve seen to date,” said Cyberhawk CEO Chris Fleming in a statement.

Recent UAV regulations and sensor technologies point to the growing influence of drones on oil and gas projects in the not-so-distant future.