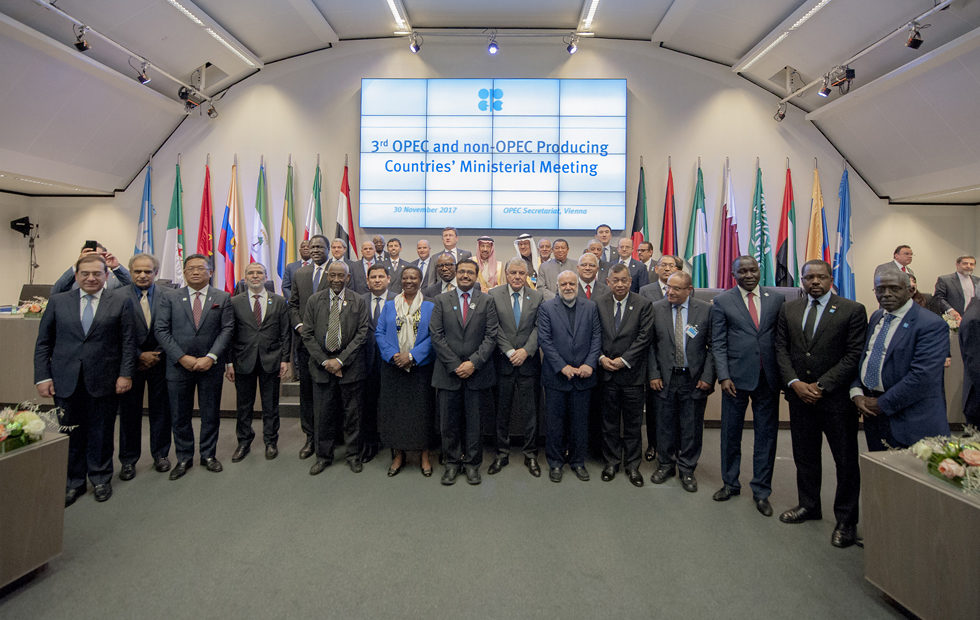 Representatives of OPEC and non-OPEC countries met in Vienna on 30 November for the third time in the past year to discuss output limits. Photo courtesy of OPEC.

OPEC and 10 non-OPEC countries agreed on 30 November to extend their agreement to collectively curb production by about 1.8 million B/D through 2018 in an effort to rebalance the global oil market.

It marks the second such extension by representatives of those countries who reconvened in Vienna a year after OPEC first agreed to curtail its output by 1.2 million B/D before certain non-OPEC countries followed suit with a 558,000-B/D cut. Both groups will stick by those levels going forward.

OPEC said it will assess the progress of the deal in June 2018 and determine whether an adjustment is needed “based on prevailing market conditions and the progress achieved toward rebalancing of the oil market at that time.” Nigeria and Libya, both of which were exempt from the original deal, have agreed to cap their output at their 2017 highs, which total 2.8 million B/D.

Total OPEC crude production fell 151,000 B/D that month to 32.59 million B/D, with additional declines from Iraq, Iran, and Algeria more than offsetting increases from Saudi Arabia and Angola, according to secondary sources in the report.

Perhaps most important to the efficacy of the agreement is compliance among its participants, particularly by OPEC members, which has been surprisingly strong according to most analysts. The International Energy Agency’s (IEA) recently published Oil Market Report said OPEC’s October compliance rate was 96%, lifting the year-to-date average to 87%. Non-OPEC compliance was 107% during the month and 81% year-to-date.

Another threat to the deal’s potency, US oil production, continues to grow and some operators could take the opportunity to ramp up drilling and production activity given the higher, more-stable prices of recent months.

The US Energy Information Administration reported 30 November that overall US output in September reached 9.48 million B/D, up 290,000 B/D from August. Texas and New Mexico, homes of the still-hot Permian Basin, added 193,000 B/D and 43,000 B/D, respectively, during September. US crude exports also have risen to record levels in recent weeks, helping US crude stockpiles continue their months-long decline.

Khalid Al-Falih, Saudi Arabia’s oil minister and leader of the production cut agreement since the beginning, noted that the Organization for Economic Cooperation and Development inventories have moved closer to a 5-year average, with excess stocks falling to 140 million bbl in October from 280 million bbl in May.

As for concerns about US shale production growth, he said, “The contribution of shale in 2017 is going to be very much manageable. My expectation is that 2018 will not be significantly different from 2017.”

Ann-Louise Hittle, vice president, oils research, at consultancy Wood Mackenzie, said the “stakes were high for OPEC” this time around.

“Despite the success in cutting output and follow-on price recovery, if the agreement had ended in March 2018, our forecast shows there would have been a very large 2.4 million B/D year-on-year increase in total world oil supply for 2018,” she said. “That would have led to a persistent oversupply for every quarter of 2018.”

Wood Mackenzie said it expects a 1.8 million B/D year-on-year increase in world oil supply if the deal shows the same level of adherence through next year. The market will still be oversupplied in the first half of 2018, but the extension should tighten the supply/demand balance in the second half.

Non-OPEC collaborators are Azerbaijan, the Kingdom of Bahrain, Brunei Darussalam, Kazakhstan, Malaysia, Mexico, the Sultanate of Oman, the Russian Federation, Republic of Sudan, and Republic of South Sudan. Equatorial Guinea, originally a party to the non-OPEC agreement, joined OPEC this year.