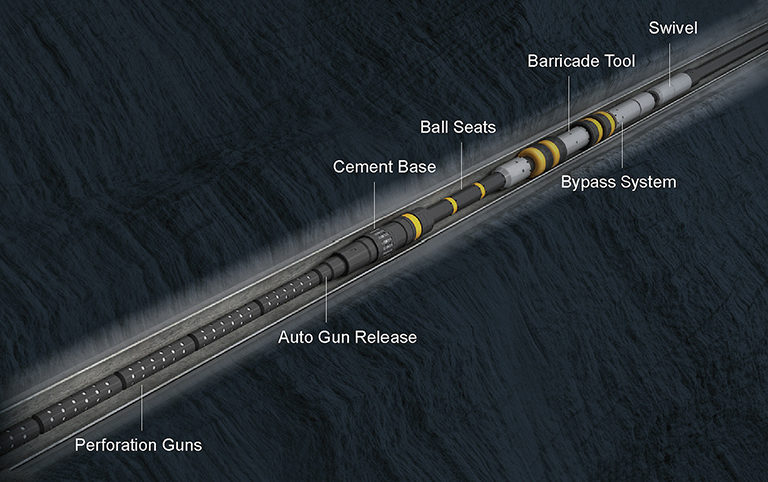 Source: Archer.
Fig. 1—The one-trip barrier system is shown with its components indicated.

Traditional well plugging and abandonment (P&A) methods are not efficient. For example, section milling is time-consuming and expensive because of the number of rig days required. The milling produces cuttings, which have to be handled. Contamination of the milling fluid with oil-based mud (OBM) requires separation before disposal. Cutting casing requires pulling it from the hole. Handling tubulars has numerous inherent risks, and removing old tubulars, especially, could bring up naturally occurring radioactive material from the subsurface.

Decommissioning a well must always achieve permanent integrity, and central to this is the successful placement of a rock-to-rock cement barrier. Creating such a barrier, without section-milling or retrieving and pulling the casing, offers a major cost advantage over traditional methods.

Developed by Archer, the Stronghold Barricade system (Fig. 1 above) leaves the casing in situ. The system perforates, washes, and cements the annulus, creating a rock-to-rock barrier in one trip (Fig. 2).

In addition, the system reduces personnel risk, in part by reducing the number of individuals required. For example, not having to pull casing eliminates the casing crew and tong operations. The system only requires a single tool operator and the cementer, who would normally be present on the rig to pump the cement.

A contingency system with multiple sets of guns can also be used. If the first set of guns fails to create the required injection ports, the second set can be fired by annular pressure without pulling out of the hole.

The second feature is the creation of a cement base to contain the cement plug above. The cement base is effectively an integrated bridge plug. Situated immediately above an auto-gun release, the cement base is activated after the guns are released and the tool is run to below the perforated interval to provide a secure base for the cementing operation.

The cement base is set by pressuring up on a dropped ball. A pull test and further pressure then releases the base from the string. The dropped ball is retained in the base, leaving the pipe with no restriction.

The system first creates circulation ports by perforating the casing. After dropping the perforating guns into the sump, mechanical isolation is then achieved by running down to the bottom of the perforated section and setting the cement base to plug the bore.

Fluid is then injected into the ports below the tool and circulated up the annulus and back into the casing through the ports above the tool. OBM behind the casing can then be collected and disposed of, with less need for separation. This method eliminates casing removal. This alternative circulation path enables washing of the annular circulation path to condition the rock wall of the wellbore for an effective cement bond.

During the wash operation, the tool can be rotated up to 120 rpm. Fluid, even acid, can be circulated with high differential pressure because of the cement base below.

Picking up from the bottom, the process is essentially repeated, allowing a second washing of the wellbore with wash fluid from the bottom to the top of the perforated interval. Pressure indications locate the perforations. Once past the top perforations, no further circulation is possible. The pumps are then stopped. To prepare for the cement job, pressure is increased to shear out the ball dropped earlier. This establishes full circulation down the drillpipe.

Unique to the tool’s function are two independent circulation paths. The first is down the drillpipe and out a port between the swab cups, with a ball at the tool’s end to prevent circulation out the bottom. This allows the washing of the annulus.

The second path is created after the ball is blown out. Fluid can then be circulated out the bottom of the tool and up the outside, bypassing the swab cups through dedicated channels that reintroduce the fluid above the tool and back into the drillpipe-by-casing annulus. The two fluid-circulating paths are mutually isolated.

A spacer, with a ball in front of it, is then pumped down to the bottom of the tool. The ball lands on a seat to prevent circulation around the bypass and allow fluid to enter only the perforations and the annulus, between the swab cups.

The cement spacer displaces the wash fluid and fills the annulus between the casing and the open hole. In a similar way, cement is then placed in the outer annulus. Cement is placed in the annulus as the tool transits up through the perforated interval, until the area is filled with cement.

A pressure spike indicates that solid casing has stopped circulation. The tool is then picked up further into the solid casing, and the ball that has closed off the bottom of the tool is blown out. Full circulation around the tool is now re-established.

Once the tool is above the cement, circulation down the annulus is started. Cement residue is all around. Pumping down the drillpipe-by-casing annulus, in through the bypass area of the tool, around the swab cups on the inside of the tool, and out of the bypass at the bottom will bring the cement residue into the bottom of the tool and up through the bore into the drillpipe. Reverse circulation at a high rate cleans up any cement residue present and cleans up the end of the cement job. The tool is then pulled out of the hole.

The system was recently chosen by a major United Kingdom operator, who sought a time- and cost-efficient P&A method that would leave a rock-to-rock barrier that met regulatory requirements. A benefit of washing the perforations with this system is that standpipe pressure is an indicator of debris volume on the back side of the casing. High pressure indicates a high amount of debris; low pressure indicates a low amount.

The 550-ft cement plug, with a 168-ft rock-to-rock lateral barrier at a depth of 2,431 ft, was verified by load and pressure testing. A rock-to-rock barrier that met customer and regulatory requirements was achieved in 15.5 hours.

Well-Abandonment Solutions Use Bismuth and Thermite Effectively and Safely

This paper demonstrates a new way to create gas-tight seals during well abandonment, overcoming the limitations of traditional methods and reducing the operator’s liability and potential environmental impact after decommissioning has been completed.