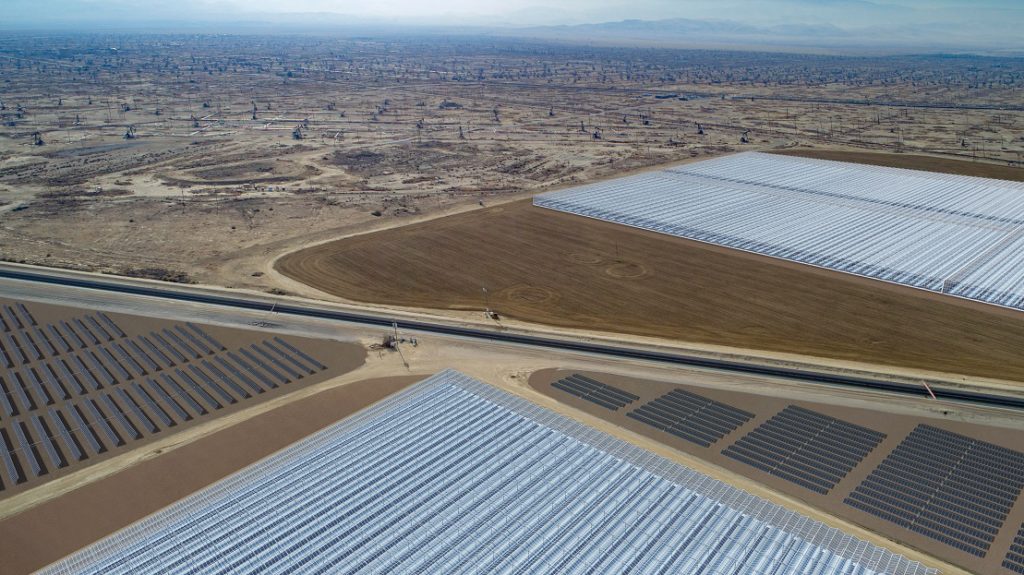 A rendering of Aera’s planned 850-MW solar EOR facility at Belridge field near Bakersfield, California. Startup is expected as early as 2020. All photos courtesy of GlassPoint.

California is known for being at the forefront of renewable technology adoption and greenhouse gas emissions curtailment. Even in an industry seen by many residents as archaic, oil producers are increasingly seeking out alternative sources of energy to use in operations.

In 2011, Berry Petroleum and solar energy provider GlassPoint started up a 300-kW thermal project at McKittrick oilfield in Kern County that ultimately produced 1 million Btus/hr of solar heat over its 5-year lifespan while reducing the field’s gas consumption. That same year, Chevron Technology Ventures and BrightSource Energy launched a 29-MW thermal solar-to-steam facility as part of a 3-year pilot project at Coalinga oilfield in Fresno County.

Following Berry’s and Chevron’s lead, another one of the state’s biggest operators, Aera Energy, now hopes to utilize solar EOR over the long haul—benefitting from continually improved technology along the way—to maintain oil production at the 106-year-old Belridge oilfield west of Bakersfield.

Aera is teaming up with GlassPoint to build an 850-MW solar thermal facility to produce 12 million bbl/year of steam for reservoir injection and a 26.5-MW photovoltaic facility to generate electricity for operations. The project is expected to “deliver the largest peak energy output of any solar plant in California,” GlassPoint said.

Aera is a joint venture of ExxonMobil and Royal Dutch Shell, the latter of which acquired the field’s original operator Belridge Oil Company in 1979 and is a major investor globally in solar energy—including GlassPoint.

EOR at Belridge was first used in the 1960s, and large amounts of natural gas have since been used to fuel steam production. Aera’s production in 2016 from the field averaged 75,925 BOE/D, with 45,590 BOE/D from the Diatomite formation and 30,335 BOE/D from the Tulare formation.

“This is a field that we believe has the potential to operate easily for the next couple of decades, so we could afford to invest in a long-term project that will give us benefits for an extended period of time,” said Christina Sistrunk, Aera Energy president and CEO. The firms plan to break ground on the Belridge solar plant in the first half of 2019. It is expected to start producing steam and electricity as early as 2020.

Sistrunk said Aera’s decision to adopt solar EOR was made possible by “a combination of technology maturation and the economic opportunity that is created by the policy decisions that have been made in Sacramento around the regulation of greenhouse gas emissions.” The state has recently extended its cap-and-trade program, which “has given us some level of certainty in the next decade” regarding a framework for emissions fees, she said. California also has a low-carbon fuel standard system for which the project is eligible to receive credits.

The facility is projected to save 376,000 tonnes/year of carbon dioxide emissions while saving 4.87 bcf/year of natural gas normally used for operations, a welcome change given the expensive nature of EOR. “One of our largest business expenses is energy,” Sistrunk noted.

“I expect that we will learn a lot from the startup of this project,” Sistrunk said. She said she is hopeful that Aera “will learn how to make this technology more effective going forward, and then we’ll be able to deploy it elsewhere.”

“Over the past 6 years, we’ve gained valuable operating insights that led to advancements all throughout the system, including the greenhouse structure, the solar collectors, and various integration processes,” Bierman said. “We simplified the design, reducing overall material use and improving overall cost efficiency. As a result, nearly every part or component has changed since we first built the pilot for Berry Petroleum.”

He said that GlassPoint adopted the same once-through steam generator design deployed worldwide for thermal EOR operations—but with concentrated sunlight producing steam instead of flames. “That’s the first big advantage of our system—we designed it specifically for oilfield deployment, making it easy to integrate with existing surface facilities. It taps into the exact same oilfield water supply and uses the same pumps, controls, and automation systems that operators are familiar with.”

The greenhouse protects the mirrors from the dust and wind of San Joaquin Valley, allowing the company to use lightweight, inexpensive components inside the greenhouse to reduce costs.

“GlassPoint’s trough-shaped mirrors are made of thin aluminum sheets,” he said. “Our collectors weigh 90% less than outdoor solar collectors that use heavy glass mirrors. The mirrors are hung from the greenhouse ceiling using wires thinner than a pencil and controlled by small, inexpensive positioning systems and motors.”

After the sun goes down, an automatic washing system cleans the greenhouse’s roof, removing dust and debris that can obstruct sunlight. “The washing unit captures and recycles up to 90% of the water use, which is especially important in dry climates like California and the Middle East,” Bierman said. “This traditionally has been done manually by hand or with man-operated trucks, which is a safety hazard and wastes water.”

After constructing the McKittrick project in California, Glasspoint launched another pilot project alongside Petroleum Development Oman (PDO)—a joint venture of the Omani government, Shell, Total, and Partex—that consisted of a 7-MW thermal system at Amal West oilfield. It was commissioned in early 2013 and operated for more than 4 years, generating 50 tonnes/day of steam.

GlassPoint has scaled the technology from those projects to build the Miraah solar plant for PDO at Amal West, where construction on the first of 36 greenhouse blocks was completed this fall. Once finished, that plant will produce 1,021 MW of peak thermal energy to generate 6,000 tonnes/day of steam, saving 5.6 trillion Btus/year of gas and 300,000 tons/year of carbon dioxide emissions. The blocks are being built sequentially by specialized teams to allow each block to start operations once it is completed.

Manufacturing improvements reduced mirror material for the project by 18% to a little more than 1 kg/sq m. The mirror support structure’s new aluminum space frame design is five times stiffer than the previous design and cut aluminum usage by 30%. A new drive system, which is used to rotate the mirrors to track the sun, requires one-third fewer motors and cuts installation and maintenance costs, GlassPoint said.

As for Aera, it is on track to receive development permits for the East Cat Canyon project in Santa Barbara County early in 2019. Operations from the field began in 1889 and ceased in 1989, producing more than 1 billion bbl of oil during its initial lifespan. “It is an extensive process in California to attempt to permit a new development even in a field that has a history of oil and gas development,” Sistrunk said. Aera currently has four active drilling rigs across its California acreage.