Why the Fracturing Craze? 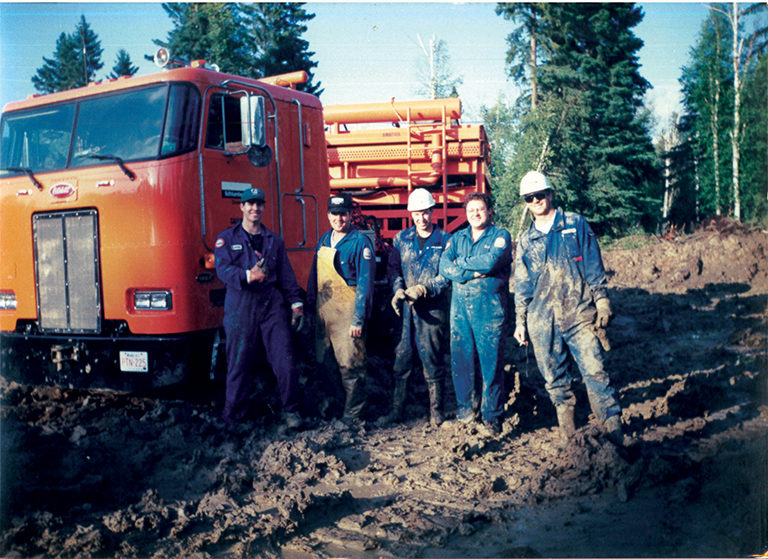 Darcy, second from right, and crew preparing to move to another frac job site in the mid-1990s.

Moving technology at the same speed as economics.

Did you know that fracturing is not permitted in parts of the Middle East? And it has been that way for a long time. Hydraulic fracturing is not a global norm, although with the rise of unconventional resources, some jurisdictions are rewriting the legislation to allow fracturing.

I have watched hydraulic fracturing grow from the workover option of stimulating an old well and reducing the skin factor to the current state of being part of every field’s development from the new well construction stage. What I fear is that sometimes as technical people we have been guilty of “photocopy engineering.” We are all about efficiency, so if it worked once, it should work the same for the next 1,000 times. Right?

Fracturing has become all about repetition and iteration. It may not be the best option.

Now in all fairness, before some of you slam shut this magazine and tear up your SPE membership card, let me give a few disclaimers. First, I have spent about half of my career performing fracturing treatments on location and designing, selling, and paying for fracs through the authority for expenditure (AFE) process. In fact, in the 1990s when I was the engineer in charge of the data van during treatments, we had the best and freshest coffee on location.

Second, our industry is what it is today—and a large amount of hydrocarbon is being consumed on a global scale—because of the incredible technological gains developed in fracturing. Third, I have been featured and vilified as the bad guy on anti-fracking websites, and it does not feel very good. Fourth, it is incredibly satisfying to witness a pure economic driver such as new production from old fields cause the commodity markets to wobble and thus rewrite the norm. The story of my colleagues and me at Triana Energy in the Appalachians is even featured in Chapter 9 of the bestseller by Gregory Zuckerman, The Frackers.

Having now stated that I am part of the “they,” meaning those who help to develop and utilize hydraulic fracturing, including writing paper SPE 57435 about multizone stimulation using coiled tubing, I will get off my soapbox and make my point.

Over the last few months, two stories got my attention. My local paper had a headline from Bloomberg reading “All that new shale oil may not be enough as big discoveries drop.” And, over the holiday season, Weatherford announced the sale of its OneStim joint venture to Schlumberger. The moving and shaking in the North American fracturing market always makes me ponder the bigger picture, and these two articles made me think a little. Having been involved in fracturing and the unconventional high-efficiency plays for over half of my career, I tend to watch that space very carefully. It is part of a world that I understand well.

Notwithstanding, one thing that really shocks me in my international travels is what a polarizing subject fracturing is. In some places, it’s really not done, not at all. Never has been. In other places, it’s used very little, such as in a stimulation treatment in a workover schedule. Or it has been recently banned with little more than hype (or water usage issues) as the key reason, and elsewhere it is so critical to the development of a field that an AFE without a fracturing treatment (representing 60% of the cost of a well) would be sent back to the asset team with a large question mark on the front—even by the accountants!

In 2009, I ran an exploration company in the Canadian Maritimes, which was doing some onshore exploration for gas. I raised more money than I had ever raised as CEO of a public company with the condition that we had to spend it on massive fracturing treatments—before we had even drilled the wells. Two years later, we were not allowed to get to first base on seismic acquisition because of the anti-fracturing sentiment that had developed.

So why do I write this column? It’s because the elephant in the room will have to move at some point. Economically, I can’t see a small part of the world spending lots of money on stimulating very marginal rock at a very large cost, while many parts of the world do not need to stimulate at all. Both scenarios are profitable, and some are closer to market than others.

At some point, the cost of massive stimulation treatments, although financially successful, will be replaced by a more cost-effective method. That’s where an SPE member comes in. Somewhere, somehow, sometime, one of our members is going to develop a technology that replaces fracturing as we know it. I have no idea how, but it will happen. Maybe still in our lifetime, maybe in a few months, maybe not for a generation—but it will occur.

Our ability to innovate as SPE members is staggering. Think about it: 30 years ago it would have been utter fantasy to have the majority of new wells drilled as horizontals. Now it’s the norm. Just 20 years ago, it was considered a dream to imagine multiple stimulations (let alone hundreds) with a single trip into the hole. Now it’s done every day. I am not sure whether the replacement of hydraulic fracturing will be from an individual, a major service provider with gigantic research funds, an innovative operator, or a small tech company, but I am pretty sure it will emerge from the greater SPE membership.

This attitude and enthusiasm keeps me on my toes as I travel. I’m continually surprised by the energy and innovation. I think of the 66% of the resources we leave in the ground, and I know that the next generation(s) of SPE members will help get more out of the ground and into the hands of hungry consumers. (These are the consumers who sometimes drive to protest marches in gas-burning vehicles, wield plastic signs made from hydrocarbon, and spread the news of the event on the Internet powered by server farms fueled by electricity generated by gas turbines … but I digress).

Our job as SPE members is to be technically astute and competent, and as engineers we are driven to innovate. We are professionals in energy, and we will find ways to provide it more efficiently and more cost-effectively, whether it is via hydraulic fracture stimulation or beyond it. I’m excited to see when it happens.

In the meantime, if you see me around and want to talk about it, I think I can find some fine “frac-van” quality coffee. We can make a pot and talk about the good old days!

Why the Fracturing Craze?