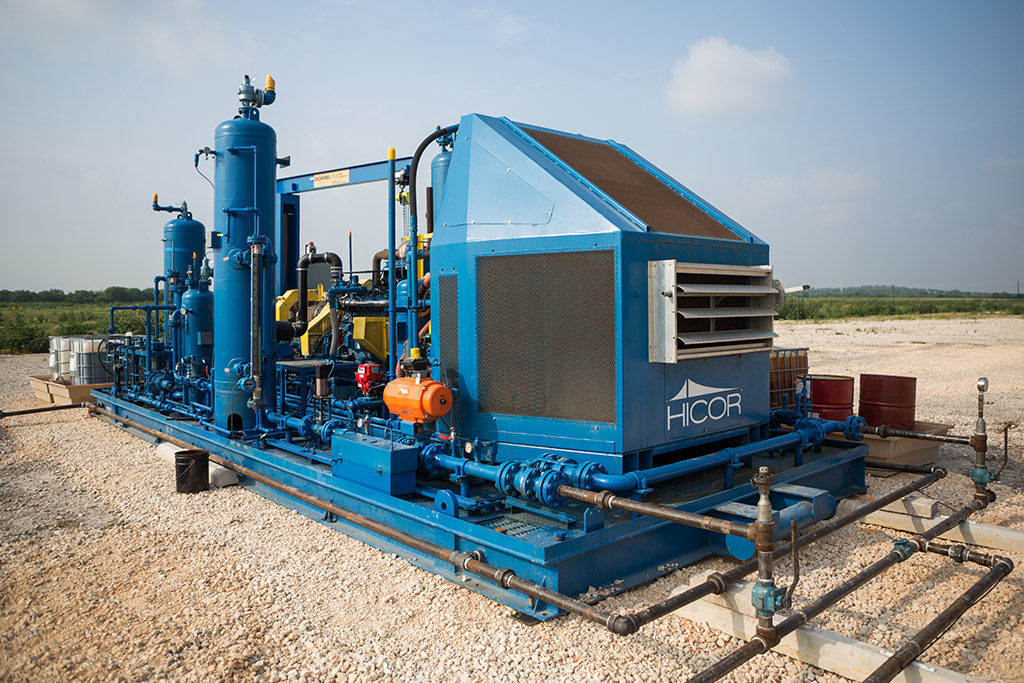 Handling wet gas at the wellsite has always required the separation of gas and liquids coming out of the well, with separate handling and transmission of both. The separated gas is treated in a compressor and sent directly to central processing facilities. The liquids are further separated and temporarily stored, with the hydrocarbons typically pumped out for processing or immediate sale and water handled separately.

Hicor is well on its way to changing that model through the design and field testing of a multiphase compressor that can be connected directly to a wet-gas well. When the technology becomes commercial, as the company expects it soon will, it will eliminate the need for costly wellsite separation and associated tank storage and allow gas with entrained liquids to travel through a single multiphase pipeline from well to processing plant.

The multiphase compression technology was developed by Hicor founder Pedro Santos, who today is a company adviser and member of its board of directors. While Santos was finishing his graduate engineering studies at Massachusetts Institute of Technology in 2009, he began to work on developing a near-isothermal compression process to enable the design of a compressor with high thermodynamic efficiency.

The technology he developed led to the startup of Hicor’s predecessor company the following year. Today Hicor is backed by Chevron Technology Ventures, Statoil Technology Invest, EV Private Equity, and other angel investors.

The Hicor compressor features a novel hybrid rotor design, and at the heart of the processing technology is a proprietary technique by which an atomized liquid coolant is injected into the compression chamber. The coolant can be just about any liquid, whereas in a typical wellhead application the liquid hydrocarbons in the wellstream are used as the coolant fluid.

“The physics of gas compression is that as you compress gas, it heats up,” said Jeremy Pitts, senior vice president of engineering at Hicor. “But as the gas heats it becomes harder to compress. As you add energy to compensate for that, the gas becomes even hotter and the process quickly becomes inefficient.”

Traditional compressors do not tolerate liquids, and because of the rising temperatures inherent in the process, they have difficulty achieving compression ratios of more than 5-to-1. By designing a machine that can be liquid-cooled, Hicor has taken advantage of the superior heat-absorption properties of liquids.

“With a liquid present in the compressor, you are still generating the same amount of heat, but a liquid has roughly three orders of magnitude more heat capacity than a gas,” Pitts said. “When you put these little droplets of liquid inside the compressor, they absorb that heat so you don’t get the temperature rise. That keeps the compressor from overheating and makes it more efficient.”

A further advantage is that the unit can achieve compression ratios of 30-to-1 or even 40-to-1. “You’re limited more by geometry than by thermodynamics,” Pitts said. The high-ratio performance capability applies equally to wet-gas and dry-gas compression.

As Hicor developed the technology, it benefited from a bit of serendipity. Santos had originally focused on the near-isothermal process and its thermodynamic efficiency, not on a multiphase wellstream handling capability. However, in discussions with potential customers in the oil and gas industry, it became clear that the compressor’s ability to tolerate liquids opened a bigger opportunity than anticipated.

“We began to realize there was this big unmet need that could now be addressed because you could put liquids through our compressor,” Pitts said. “So now our story is much more focused on that multiphase piece.”

What producers envision is a simplified, more economical wellsite infrastructure with increased system efficiency, as separation and processing functions shift to central locations that can offer greater handling capacities and better economies of scale.

At the wellsite, the machine’s high ratios allow most applications to be handled by a single compression stage, often replacing the two or three stages required with conventional technology and significantly simplifying the compression package.

The Hicor compressor also allows considerable flexibility to address changing wellhead conditions. The unit can operate smoothly at off-specification conditions and run on a given wellhead for a much longer period as well pressure declines, which can eliminate compressor switch-outs and may increase the well’s resource recoverability, Pitts said.

Full performance of the compressor has been proven in a laboratory setting with thousands of hours of sustained testing completed and the expected life of various wear components having been extrapolated to a year or more. Hicor is more than a year into field trials, which have primarily been conducted with Statoil.

“We are actively seeking partners for additional commercial trials in the second half of the year,” Pitts said.

In this paper, the authors introduce a new technology installed permanently on the well completion and addressed to real-time reservoir fluid mapping through time-lapse electromagnetic tomography during production or injection.