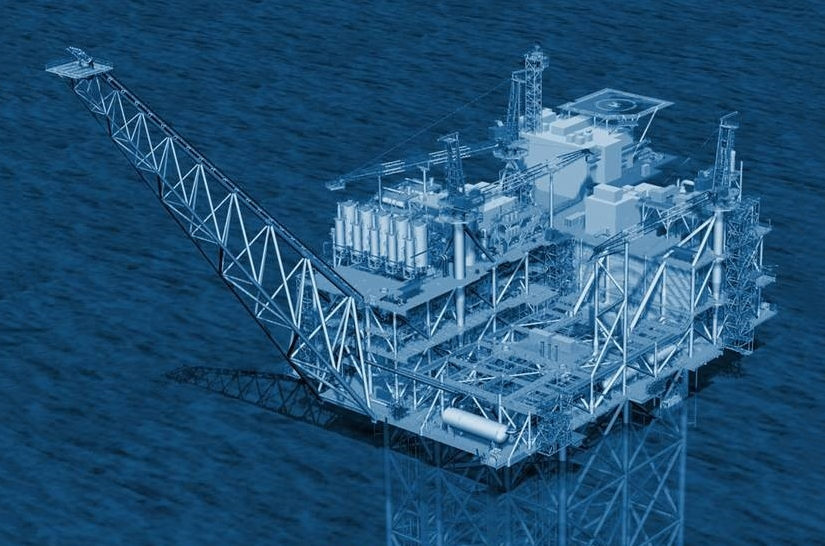 The project will make a major impact on Israel’s gas supplies and could transform energy sourcing for a number of locally undersupplied countries in the eastern Mediterranean area.

“You’re bringing an affordable, reliable source of energy—and a clean source of energy—to countries that don’t always have access to it, or it’s intermittent or it’s not reliable,” Hogan said.

One of Largest Recent Discoveries

Situated in the Levant Basin and discovered at the end of 2010, Leviathan holds an estimated 22 Tcfe of gross recoverable resources and ranks as one of the world’s largest gas finds in the last 10 years.

The design of the $3.75-billion phase one of the project calls for production to be gathered from four subsea wells at the field, located in approximately 5,500 ft of water about 80 miles west of Haifa, and delivered by two 73-mile flowlines to a fixed platform that will be installed six miles from shore.

Now under construction, the platform will hold full gas-processing facilities and have a topsides weight exceeding 40,000 tons. A planned pipeline will connect the platform to an onshore receiving station at Dor, where it will tie in to the national gas grid to be distributed throughout the Israeli market for electricity generation and industrial uses. Natural gas from Leviathan will also be exported to regional markets. Condensate production will flow to shore through a separate pipeline.

The four production wells, all being completed this year, will each be capable of producing more than 300 MMscf/D of gas. The project is designed for a cost-effective and export-focused expansion in phase two that could add another four wells and boost the initial 1.2 Bcf/D capacity to 2.1 Bcf/D.

“We take a hands-on approach to project execution that keeps the company and our contractors aligned and focused,” Hogan said, noting that phase-one first gas is on target for the end of 2019—only 34 months from the project’s final investment decision made in February 2017.

To make it happen, Noble is coordinating the work taking place under more than 150 primary contracts with manufacturing in 17 countries and many more subcontracts stretching into other countries.

The subsea manifold under construction for gathering the four wells’ production will weigh more than 430 tons. The project will use more than 117,000 tons of line pipe, 92 miles of umbilical, and 264 miles of cable, while requiring the installation and hookup of more than 10,000 valves and 33 miles of deck piping.

“The numbers are really phenomenal when you look at it and consider the time that we’re completing it,” Hogan said.

Noble’s Tamar gas field, which came on stream in 2013 about 30 miles east of the Leviathan field, sends its production by offshore pipeline to the Tamar Platform and then on to the company’s Ashdod onshore processing terminal in southern Israel. The processed gas supplies the domestic electrical grid, meeting up to 60% of Israel’s power generation needs, and is exported to Jordan.

It is Israel’s growing demand for gas in the electric power sector that led the government to seek initial gas delivery from Leviathan by 2019.

For Noble, ensuring the reliability of the planned Leviathan facilities is an overriding objective, given Israel’s level of dependence on Noble’s operations for energy supplies. Tamar has experienced minuscule downtime, since starting up in 2013, Hogan noted.

“Leviathan’s going to be no different,” he said. “It’s going to have a huge impact if it does go down, so reliability is key. How did we get comfortable that we’re going to put a reliable facility out there? We have a proven track record using this conventional technology. We don’t want to be serial number one in anything.”

Reliability of future supply was also a major factor in working a planned expansion into the design of Leviathan from the outset. “Leviathan’s going to have a big chunk of [the] energy supply for not only Israel but for the region,” Hogan said. The facility’s design will minimize impact to existing operations and production during the expansion.”

Additionally, the Israeli government stipulated that Leviathan minimize its onshore footprint, which led to the decision to place the gas processing facilities onboard the platform. Thus, the onshore station at Dor takes up less than one acre, compared with the 18-acre facility at Ashdod.