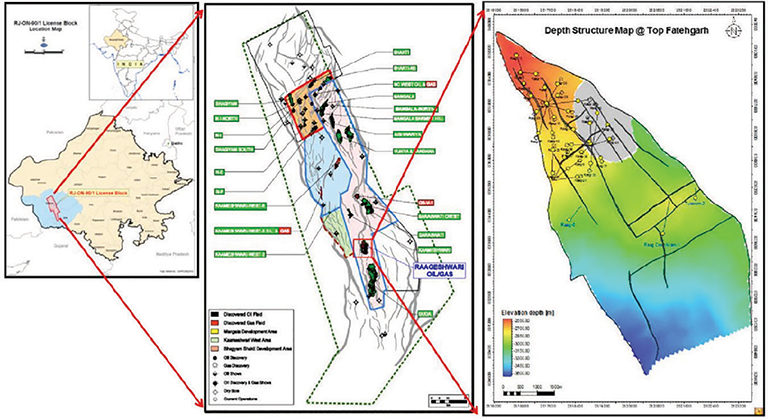 This paper summarizes key engineering discoveries and technical findings observed during the execution of 200 hydraulic-fracturing diagnostic injection tests in the Raageshwari Deep Gas (RDG) Field in the southern Barmer Basin of India (Fig. 1 above). These tests were conducted in one of the few commercially viable thick and laminated volcanic gas reservoirs in the world. These diagnostic tests were spread over five separate campaigns over 11 years.

Because of the low permeability of this gas reservoir, hydraulic fracturing was necessary for sustained economic productivity. Because this massive laminated reservoir contained between 15 and 40 vertically separated pay sections, a key design consideration was to connect as much pay as possible with the least number of fracturing stages.

Although a conventional plug-and-­perforation fracturing technique gives full assurance of optimal fractures for every bit of pay, the completion cost would undermine the project’s economics. Therefore, a limited-entry technique was selected. The uncertainties and risks were evaluated to maximize the probability of success.

More than 60 diagnostic fracture injection tests (DFITs), approximately 90 step-rate tests (SRTs), and approximately 50 minifracture tests have been conducted. In addition to conventional fracture diagnostics tests, other techniques were applied successfully. One such example was the use of multiple SRTs within the same fracture stage to evaluate limited-entry efficiency. As a result of the test data, the number of clusters per fracture stage was increased from three to six, achieving an overall increase in net-pay coverage of approximately 65%.