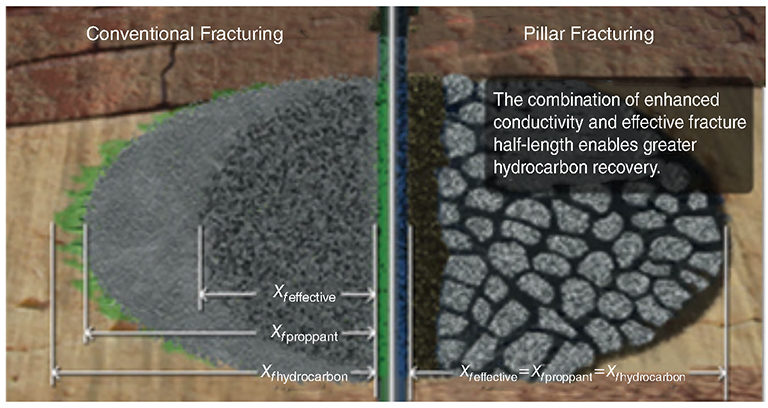 The Kaji Semoga Field in South Sumatra consists of three main reservoirs—Telisa sandstone (TLS), Baturaja limestone, and Talangakar sandstone. The successful development of TLS with hydraulic fracturing led to further efforts to maximize oil recovery. After a study with suitable samples and cases, pillar fracturing was considered. This method is similar to conventional fracturing techniques where fluid and proppant are used to create conductive paths in the reservoir layer; however, pillar fracturing relies on open flow channels.

This article, written by Special Publications Editor Adam Wilson, contains highlights of paper SPE 186199, “Unlocking Depleted and Low-Modulus Telisa Sandstone Reservoir With Pillar-Fracturing Technique: Well-Performance-Improvement Comparison With Conventional Fracturing,” by M. Azhari, SPE, N.F. Prakoso, and D. Ningrum, Medco E&P Indonesia, and L. Soetikno and A. Makmun, Schlumberger, prepared for the 2017 SPE/IATMI Asia Pacific Oil and Gas Conference and Exhibition, Bali, Indonesia, 17–19 October. The paper has not been peer reviewed.
...
This article is reserved for SPE members and JPT subscribers.
If you would like to continue reading,
please Sign In, JOIN SPE or Subscribe to JPT