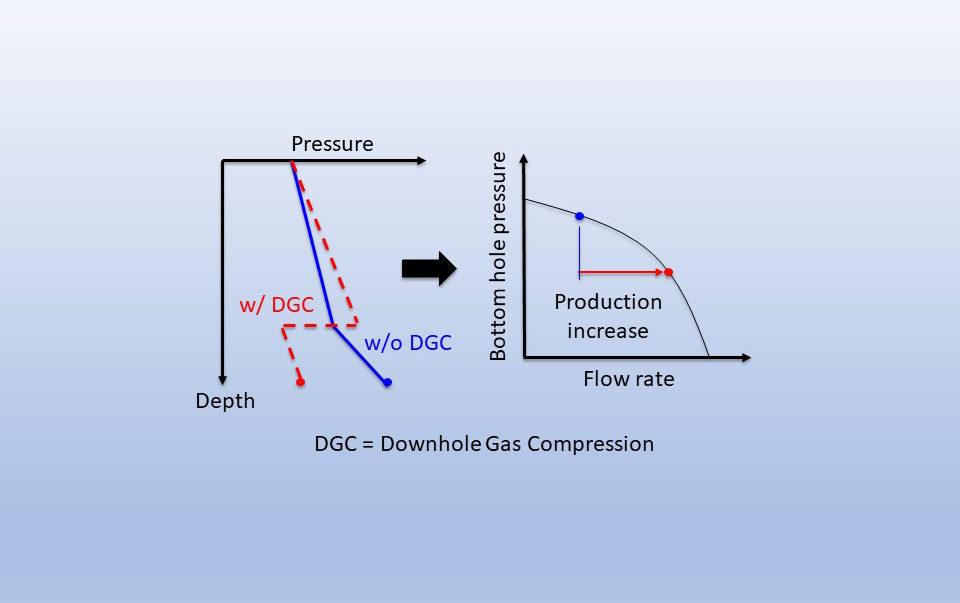 In the approach of Beggs (1991), the volumetric flow rate of a gas well is assumed to be proportional to the difference between squared reservoir pressure and squared wellbore flowing pressure (PR2 - Pwf2) in a gas well. Commonly, drawdown is defined as the difference between reservoir pressure and wellbore flowing pressure (PR - Pwf). Therefore, Beggs’ approach essentially describes the fact that higher drawdown will generate higher gas production.

It is known that for a gas well producing liquids, there is a critical gas velocity above which the gas can carry liquid droplets from the bottom to surface (Turner et al. 1969 and Coleman et al. 1991).

In the early phase of gas well, a natural flow stream from the bottom of a well to the surface has enough momentum driven by a high pressure differential to carry liquid droplets. As the gas well keeps producing, it gradually loses the momentum to carry liquid droplets because of the natural decline of the reservoir pressure, leading to liquid dropout in the wellbore and eventually the rise of liquid levels at the bottom of the gas well. The rising liquid column exerts back pressure on the reservoir and eventually overcomes the natural drive and stops the gas production.

Recent studies show that in horizontal wells, the bend section requires significantly high critical velocity, causing partial loading for most of the life of the well. In horizontal wells, liquid loading can lead to additional issues, such as severe slugging, low run-life of AL equipment and reduced permeability of a stimulated formation. To mitigate liquid loading, one can apply a downhole compressor in gas wells to both increase current gas production and delay well abandonment by increasing drawdowns, which increases the momentum of the gas flow.

Based on the analysis presented for a simulated well with a depth of 1,000 ft, a downhole compressor is a better choice than a wellhead compressor for increasing gas production. A downhole compressor provides more drawdown, which equates to 63% more gas production. It carries out significant liquids by increasing gas temperature and velocity, and requires one-fourth of the energy to achieve the same mass flow rate. These benefits are enhanced for wells deeper than 1,000 ft.

A downhole compressor is not to be confused with or substituted for a topside boosting compressor, which is still required to transport gas. However, when compared with a wellhead compressor, a downhole compressor will achieve better profits for operators from higher production rates, lower operating costs, and less downtime because of the mitigation of liquid loading. The production gained will contribute to the increase of free cash flow and the increase of hydrocarbon reserves, thus making positive impacts on both operators’ income statements and balance sheets.