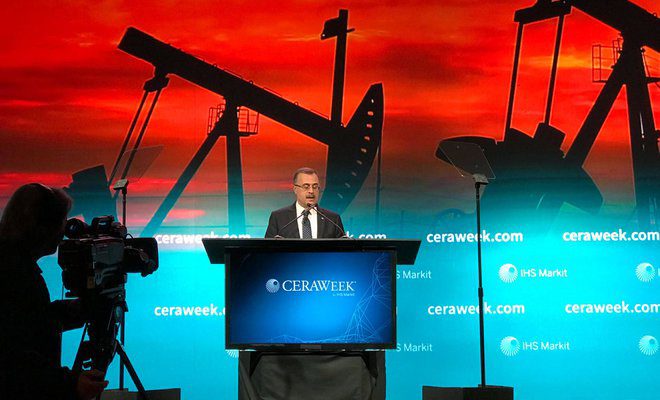 Alternative energy options and worries about climate change are not a threat to the oil and gas industry, which will need increased investment just to keep up with future demand, the chief executive officer (CEO) of Saudi Aramco said Tuesday.

The idea that alternatives to hydrocarbons such as electric vehicles will displace oil and gas in the global fuel mix any time soon is a gross oversimplification, Amin Nasser, the head of the Saudi Aramco, said during the annual CERAWeek conference by IHS Markit, which is taking place this week in Houston. “I am not losing any sleep over the idea of peak oil demand or stranded resources,” he said.

Electric vehicles face many challenges, including reliability, cost, public acceptance, and expensive infrastructure changes. The bulk of future transportation demand will come from less developed countries that likely will not be able to afford major infrastructure expenditures. Oil demand for petrochemical use also will rise sharply in the coming decade, he said, providing “a long, reliable output for oil.”

The oil and gas industry needs to invest more than $20 trillion over the next 25 years to meet expected global demand growth and replace declining production in older fields, Nasser said. The recent oil price downturn caused the industry to lose more than $1 trillion in investment, he said.

That is why the industry needs to state its case that oil and gas demand will continue well into the future. Such needed investments will come only “if investors are convinced that oil will be allowed to compete on a level playing field, that oil is worth so much more, and that oil is here for the foreseeable future,” Nasser said. “We must challenge mistaken assumptions about the speed with which alternatives will penetrate markets.”

The IEA report predicted that US crude production would to surge to 12.1 million B/D by 2023 because of shale output increases, and that the US would overtake Russia and Saudi Arabia as the world’s largest oil producer. Nasser did not address the report or his country’s recent market share battle with the US.

Asked about Saudi Aramco’s plans to go public with an initial public offering, Nasser said only that the plans are “proceeding very well” and that the company’s shareholder, the Saudi government, will decide when and where it will take place.