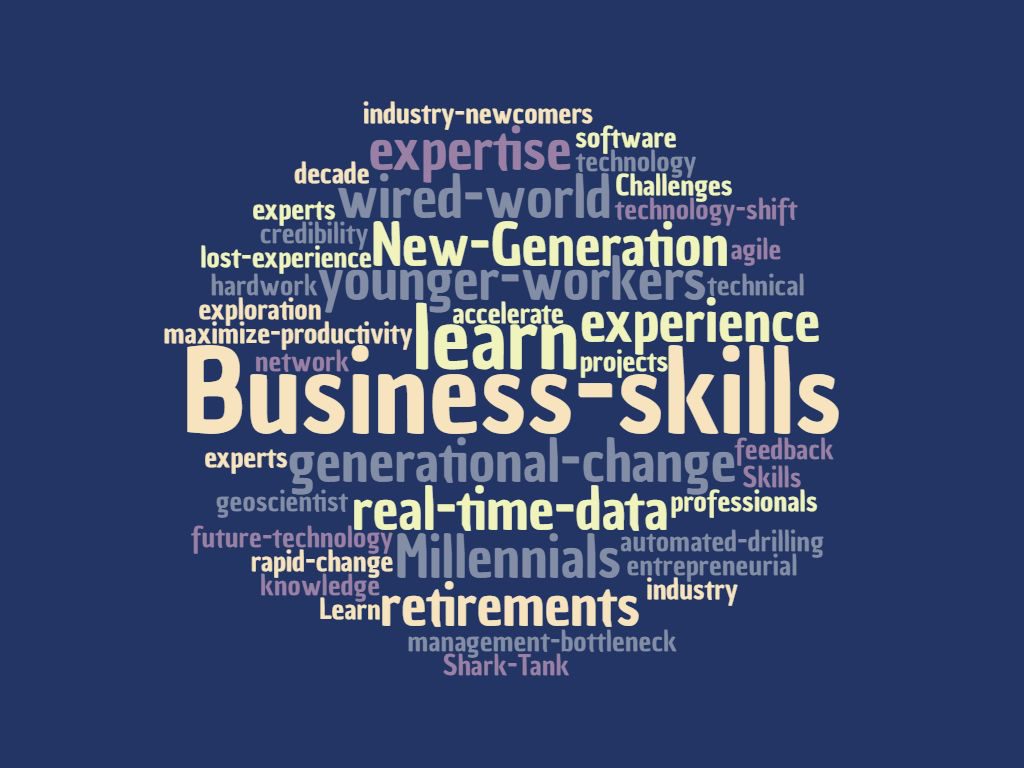 The rapid generational change of exploration professionals was accompanied by dire warnings about all the experience lost. But the skill sets that younger workers bring with them could provide the industry with the expertise needed to make a big, belated, technology shift.

“Five years ago, the average age of a geoscientist was 65 years old. There was talk of a wave of retirements that would wipe out all the knowledge in this industry. You have not heard that in a couple of years. All those people retiring were not nearly as critical” as thought, said Jim Wicklund, managing director for oilfield services research at Credit Suisse.

The comment was made during a discussion of the future of technology at the recent IADC/SPE Drilling Conference, and none of the other panelists disagreed.

Those industry newcomers grew up in a wired world where knowing how to get the most out of software is as common as rebuilding engines was for the generation that came in during the 1980s. The panel discussion was sandwiched in between technical sessions focused on gathering and using real-time data to maximize productivity and strides made in automated drilling.

“Millennials are not the bottleneck here. A change of generation will radically accelerate technology,” said Karl Blanchard, executive vice president at Weatherford, adding that, “We in management are the bottleneck. They grew up with the technology.”

They are a promising group with needed skills, but they also have a lot to learn.

As the father of a son who works in the oilfield services business, Blanchard is both proud of his son’s skills and has some blunt fatherly advice about the hard work it takes to sell ideas—such as building a network of supporters and establishing the credibility needed to get a hearing, and possibly a green light.

For Kuhan Chellapah, a drilling fluids specialist for BP, the future of the industry is his waking reality. He is still young, but with more than a decade in the industry he is among a relatively small group of technical experts with that level of experience.

His job demands that he be entrepreneurial, agile, and quick to learn from experts outside the industry, which is not a bad short list of corporate survival skills during a period of rapid change.

Pioneer Resources is consciously working to bring in outside thinking with a technology review program that has featured experts ranging from an astronaut to a mathematician. It runs a program modeled after the television show Shark Tank, offering feedback on ideas, and a corporate fund that has backed $50 million in projects, said Sha-Chelle Manning, director of corporate innovation for Pioneer.

One project being deployed is an automated system for analyzing core samples to help identify prime drilling targets. The system was so good at the job once done only by geoscientists that it led to questions about their future job prospects.

“They will have to do different jobs,” she said. The automated system can generate more information to exploration teams, which will need to find ways to exploit it.

Those looking to get ahead need to combine an understanding of the business with their technical skills.

Occidental Petroleum’s training program for technical people advises them to consider their audience when talking to others. That can go well beyond avoiding technical jargon when speaking to non-engineers. A paper delivered at the conference (SPE 189683) on measuring drilling performance showed the value of translating engineering metrics into the financial measures used by top executives who focus on budgets.

“It changed the perception of the drilling organization,” said John Willis, drilling and completions manager for Occidental. The problem was that drilling was perceived as a high-cost operation obsessed with speed. A new reporting method that makes monthly adjustments to reflect the constant changes in the company’s plans and productivity did “a much better job of communicating the cost of the wells.”

These critical skills are not normally fit into the highly technical university engineering curricula. Engineers need more training in everything from supply chain management to applied analytics, Wicklund said. And ideally they could also take a class about “where they get to dream of what energy could be.”

Those who do not learn business skills are likely to feel stymied in the future. “The greatest engineer in the world that does not understand a P&L (profit and loss) statement gets himself pigeonholed” as a technical expert with little upside potential, he said.

As a drilling fluids specialist at BP, Kuhan Chellapah, is pushing drilling fluids research and development. That includes working with researchers in universities and with bright newcomers wondering what to do when promising ideas run into daunting obstacles.

“On a technology team you get pragmatists and get idealists and there are not too many in between,” Chellapah said. Both approaches have downsides. A pragmatist can be too quick to give up on an idea that could be valuable with more work, while an idealist may want to keep an idea alive long after it is clear that the upside is not likely

“How do you play the risk vs. reward game? When do you put more effort into it, or go one to another one,” Chellepah said, adding, “You need to have a balance.”

Some innovations only make senses if a person can see the value others miss.

Dietmar Reicht, global coordinator for oil and gas at voestalpine embraces the potential of 3D printing of high-performance parts, but not because it is the low-cost option.

“Newcomers will try it to make something. They do it and say we have printed a part,” he said. The problem is that that may be much more expensive that if it were simply cast, and for that reason they never do it again, he said.

“It is only economic if you add value to the part,” he said. The key is seeing a market that demands what 3D can do that traditional methods cannot: creating unique shapes, one-piece components that otherwise would have required many parts, or simply delivering a part in a hurry to a user facing costly downtime.

The result could be a parts supplier that does not look like a manufacturing company.
“There is little physical inventory” because the assets are designs stored in servers that can be produced on demand, he said.

For years, there has been talk about mass producing wells in the unconventional oil business.

But Karl Blanchard, executive vice president and chief operation officer for Weatherford, suggests the industry is setting the bar pretty low. The problem is, studies of onshore drilling sites, from the day work starts to when the well goes into production, is “only 15 to 20% of the time was there work going” on the well, he said. “The rest of those days are wasted time,” he added. “Is that really a factory? Is that what you would conceive as a high-efficiency manufacturing? We are not even close to what can be done on changing the process.”

Simply scheduling work to increase the total to 30% of the days could significantly improve profit margins.