First Person: Oilfield Success of “Millennials” in the 1970s Might Offer Encouragement Today 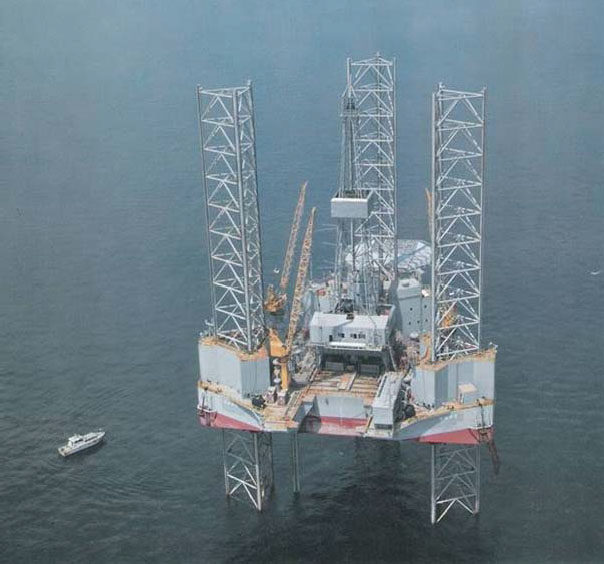 In early 1970, a 29-year-old legal immigrant, with 3 years in Houston, a master of applied mechanics degree, a new PE license in Texas, a perceived opportunity, and no capital, started a consulting engineering company in the petroleum industry. Four years later, the company had grown a team of brainy “millennials” and had secured a contract to design the world’s largest jackups to the industry’s most demanding standards for the North Sea. Built in France to DNV class, the Dyvi Beta and Dyvi Gamma entered service in 1976 and 1977 with legs 508 ft long. One of them is still working today, 41 years later.

While the pioneering design advances from Engineering Technology Analysts Inc. (ETA) were news in 1974, the less dramatic but bigger story was how this upstart outfit with its young, relatively inexperienced team of engineers, mostly with advanced degrees and four with doctorates, had carried it all off in the middle of the conservative offshore drilling establishment. That is discussed here in the hope of inspiring young professionals in today’s difficult times.

The start in early 1970 was very modest, performing structural analysis of piping systems and offshore structures using the latest computer methods. As president, I had seen a need for engineers to get such computer-based analyses done using the large computers of that time, when the fad of time-sharing computer services would never be able to tackle that work and engineering companies were not often skilled in these new “black arts.”

That was the Stone Age of computer as things go today: 2 decades before personal computers became common on engineers’ desks, and when 32K and 64K batch computers cost millions. Input was via punched cards, often taking late nights at the data center to get the data debugged and correct to run when your time slot came around. Nevertheless, the mix of engineering analyses and computer methods caught on, the timing was ripe, and ETA’s good people attracted bigger and bigger assignments, particularly on jackup mobile offshore drilling units.

As ETA grew and tackled more complex analyses, the company started to see better ways of doing things and started its own design work on new concepts. There was a lot of fast learning in the team, such as understanding how jackups were infested with critters–each jackup had its own mouse hole and a rat hole. Up in the derrick there was a monkey board, and more mysteriously there was a possum belly tank.

And then there was the design principle of building some components “hellferstout, i.e., more robustly than any engineering theory might dictate, instead drawing on practical history. It turned out to be very sensible, necessary, and quite compatible with our sophisticated computer-based structural models.

In those days, “weevils” were a hazard. A “weevil” was someone who did not know his way around a drill floor and, hence, could be danger to others as well as himself. Many of these brainy engineers at ETA were secret weevils but working alongside non-weevils they became powerful. The offshore drilling culture in 2018 might be different but today’s drillers in operating oil companies still say “git ‘er done” and have their own lingo.

ETA had no time to worry about “diversity” because no one bugged us about it and we had to get the job done with whatever engineers were willing to work and knew what they were doing.

America and graduated with really good advanced degrees. So we were able to hire some first-class talent, gaining brainpower advantages that allowed us to do great work.

There were ups and downs in the first 3 years. The first big break for ETA and its jackups came in March 1973 when we signed an agreement to design a jackup for 300 ft water depth for Robray Offshore Drilling, a new company based in Singapore.

The new design of jackup, the “ETA Robray 300 Class,” would carry variable loads double that of established designs, do ocean move without removing leg sections, and have a leg structure lighter than established competitive designs, something we believed would make it more economical to build by a large margin.

Over 1976-1982, a total of five jackups of this design were delivered from Robin Shipyard in Singapore and four from Hitachi in Japan. The first two are shown in Fig. 1.

Of the five US patents awarded to ETA, only one was actually used. It is excerpted in Fig. 2. Two key innovations were: (1) a “tubular chords with double central racks” leg chord design, ultimately used in 39 jackups during 1976-1982, 11 of which were of ETA’s design, and (2) cast steel joints to reduce joint stresses and fatigue (a common issue in the early 1970s) but were not so popular, being used in only six jackups.

Quite apart from the jackups that got built, ETA worked up design concepts that never did make it off the drawing boards, and this was at a time when we really did use drawing boards. One patent covered a concept for folding legs so that leg sections did not have to be removed during ocean moves. Two patents covered leg features to mitigate leg loadings while going on location.

A production jackup with one leg was developed and subject of another patent—the ETA Mobile Monopod—and while it was never built, the concept appears to have stimulated four other major companies to devise their version of a monopod. As you might gather from all this, the general atmosphere in ETA was really creative and enterprising but only a few of the bright ideas actually were built.

ETA’s second big break—and our biggest accomplishment—came a year after the Robray deal: the securing of a contract to design two jackups for the North Sea (Fig. 3).

Not only were they the world’s biggest jackups for that time, they were designed to meet the  most demanding operating criteria of the day, required to survive loadings two to three times what we had dealt with the previous year for the ETA Robray 300 Class design. They were classed by det Norske Veritas (DNV) for North Sea service, meeting the world’s most stringent standards of the day.

A total of 11 jackups of 300-350 ft water depth capability were delivered during 1976-1982. Dyvi Gamma was lost when a tow line broke during a move in 1990 in the North Sea and Nanhai III was lost in 1985 in a blowout in the Asia Pacific. The other nine are all still in existence today, seven still working and two stacked, despite being up to 41 years old. A lesser number of the smaller jackups designed for Pool Company exist today. The ETA “career total” of 21 jackups is shown in Table I, with their current status.

Table I—Summary of jackups built using ETA designs with status at the end of 2016.

Today’s Oversupply and Advances in Design

Today there is something like 300 more jackups in the world than there are work for them. So an ETA style opportunity for new jackup designs is not likely to be repeatable for years and years! But there might be some novel way to employ at least some of that huge oversupply in a productive new way. Dreaming up that solution does not necessarily require the experience of grey-haired offshore drilling hands, or decades of experience! Maybe there are some brainy enterprising millennials who could carry it off.

If you ask me what opportunities a millennial should go after in 201, I have no idea, specifically. At ETA, we did not have a magical plan for the future but followed opportunities and ideas we believed in. We worked as hard as we knew how—it was actually fun and stimulating. Working as smart as we knew how also helped! Mistakes were still made and so learning from them and recovering was critical.

Treating people with respect and loyalty stirred wonderful results. Then there is that Texas oil patch word “bodacious” that I learned not long after arriving in Houston, a marvelous principle to include in a business plan.

A more extensive version of this story, as well as additional information, can be found at www.ETAanditsJackups.com. 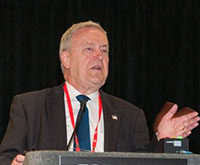 In February 2017, Peter Lovie celebrated 50 years since emigrating from his native Scotland to Houston for what became a career in the offshore petroleum industry.

He started with Cameron and The Offshore Company (now Transocean) and, in 1970 was co-founder and president of Engineering Technology Analysts Inc. (ETA) that designed a new generation of jackup drilling rigs in the 1970s. From concepts he created and engineered, jackup were built in France, Singapore, and Japan, including the world’s largest jackups of that time.  As history unfolded, 19 other jackups were built from ETA designs.

Lovie is the author of five U.S. patents, four from the ETA days, one of which (3,967,457) describes the ETA jackup leg design, including its cast steel joints and its pioneering leg chord design.

Over the past 22 years, Peter has become known in the FPSO community for his unusual combination of engineering and management roles with both the FPSO contractor and operating oil company sides of the table, as well as the necessary shuttle tanker business, first via Bluewater as North America Business Development Manager, then American Shuttle Tankers as Vice President and Treasurer, and later with Devon Energy as Senior Advisor Floating Systems where he became known for his contributions at Devon leading to the design and contracting of the first FPSO and shuttle tankers to enter service in US Gulf of Mexico.

Since 2000, Lovie has been involved in active roles with SPE, DeepStar and the Rice University Global E&C Forum. Lovie earned a master of applied mechanics degree at the University of Virginia where he was a Fulbright Scholar, and a BSc in civil engineering from the University of Glasgow in Scotland. Currently, he is a part-time independent consultant. For more, please visit www.lovie.org.

First Person: Oilfield Success of “Millennials” in the 1970s Might Offer Encouragement Today