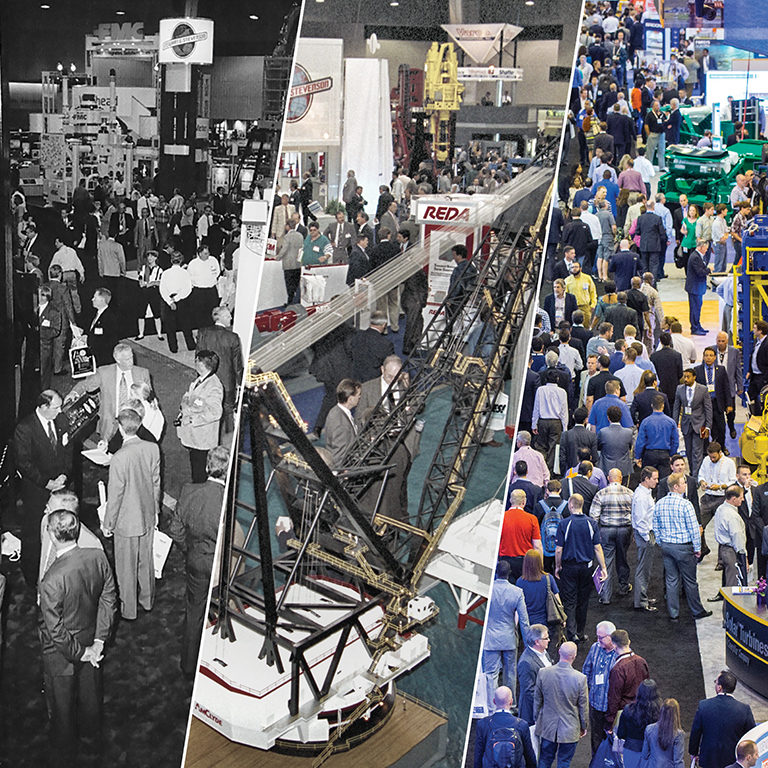 Visionaries possess an extraordinary power to imagine what could be. Yet when a future unfolds that validates them, it may so exceed the original vision that even an extraordinary power of imagination is proved in­adequate. The reality that happens vaults well beyond one’s wildest dreams. That could be said of the original decision by nine organizations in 1968 to launch the Offshore Technology Conference (OTC) in Houston the following year.

The sponsors were optimistic enough to call it “the first annual conference,” and that vote of confidence has been powerfully affirmed. The conference that convenes on 30 April 2018 at Houston’s NRG Center will be the 50th OTC.

The decision to organize the original conference was announced in a May 1968 JPT article by Joe Alford, executive secretary of SPE. “Nine of the ­leading engineering and ­scientific ­societies in the United States have taken a bold and significant step with the establishment of a new interdisciplinary meeting to be known as the Offshore Technology Conference,” he wrote. The initial conference was to be held 19–21 May 1969 in what was then the new downtown Houston Convention and Exhibit Center.

This excerpt from the article summarizes what the sponsors hoped to accomplish:

The new conference will provide a major forum of national importance and scope for the dissemination of technology related to offshore resources and environment. The total benefits and influence of the conference are now beyond prediction, but many knowledgeable persons feel that it will be of considerable value to the nation in our development of oceanography and resources from the oceans.

Yes, knowledgeable persons felt it would “be of considerable value to the nation.” But there was no intimation of what value the conference might have beyond the borders of the US or what interest it would generate internationally.

Hindsight tells us that OTC was an idea whose time had come, and clearly the organizers of the original believed that the time had come for something significant. But did they have any idea of how far-reaching the interest would prove? With participants from more than 100 countries? Of attendance that would breach 100,000 on several occasions? Of programs with well more than 40 sessions and 300 technical papers presented? Of 2,000 or more exhibitors with displays ­covering 600,000 square ft?

The Offshore Technology Conference (OTC) has 13 sponsoring organizations, which include

In certain cases, the names of the sponsoring organizations today differ somewhat from their names of 50 years ago, but broadly they are the same organizations.

OTC has two endorsing organizations, the International Association of Drilling Contractors (IADC) and the Petroleum Equipment and Services Association (PESA).

In addition, OTC has 11 supporting organizations:

But those are numbers. To put it in words, the conference is known as the offshore energy industry’s premier global event.

“It’s absolutely true,” said Paul Jones, SPE representative on the OTC Board of Directors and who attended his first OTC in 1987. “It’s essentially where everybody who’s anybody in the offshore industry—and that includes oil and gas production and even alternative energy now, which is a growing sector of our business—comes to Houston for the first week in May to attend a technical program, which is of the highest quality, continue networking, and see some of the new technologies being displayed.”

When that “first annual conference” took place, it was an auspicious beginning of modest proportions. It drew 4,200 people and offered 26 technical sessions with 125 papers presented. There were 200 exhibitors, and their displays took up 38,500 square ft. As it ended, the sponsors unanimously voted to return to Houston for a second conference in 1970. That was notable because it had been slated tentatively for New Orleans. Also of note, the preview article in JPT for the second conference used the initials OTC as a shorthand reference to the event, the first time that acronym was used.

Attendance shot up to 11,600 in 1970 with 145 technical papers presented and 269 exhibitors occupying 50,000 square ft. The following year, OTC left the convention center for the Astrohall, several miles south of downtown, at the Astrodome complex. The 1972 OTC was the first to use outdoor space for some exhibits, a practice that has continued to this day.

The move to larger space was fortuitously timed. As attendance grew in the next few years, world oil demand growth, the topping out of US oil production—at least for several decades—and rising geopolitical tensions converged to bring a sharper focus on the global oil market, oil supplies, and energy security. OTC drew 32,000 attendees in 1974 and 51,000 the following year. The number of exhibitors surpassed 1,500 in 1976, and exhibit space was now 375,000 square ft.

However, the growth was a mixed blessing. It was apparent that some visitors had little interest in petroleum technology and attended because OTC was big, in the news, and offered a lot of giveaway items at the exhibit booths. Some of the meeting organizers thought the event was becoming a bit of a carnival.

By 1983, the world oil market boom had faded, major mergers of oil-producing companies were in full swing—as buying reserves that were already on a competitor’s books looked far less expensive than risking capital on exploration—and OTC attendance dropped to 59,000. The industry was in a state of contraction, and many exhibiting companies approached the OTC Board to ask if the exhibition could be held every other year because of business conditions.

The board accepted these recommendations and decided to hold only an OTC technical conference in 1984. It should have smelled trouble as soon as it asked companies to sign agreements not to exhibit at any new exhibition that might emerge to compete with OTC. Each company resisted signing an agreement, as it was concerned that its competitors might refuse to sign and thus compel the company to exhibit if another exhibition was held somewhere in the absence of that at OTC. That fear became a reality.

There were not one, not two, but three competing events that sprouted up in 1984, one at another location in Houston, one in Dallas, and one in New Orleans. For the exhibitors, it proved a much heavier burden than the one they wanted to avoid by requesting the Board of Directors to cancel the original ­exhibit. The board learned its lesson and since then has voted to hold the exhibit every year, whether in good times or bad.

Crucially, the board elected to hold onto its lease dates at the Astrodome complex, despite cancelling the 1984 exhibition. That ensured a smooth transition to 1985, in which OTC drew 56,000 attendees and technical papers rose to a much healthier 230. Exhibit space remained virtually the same as 2 years ­earlier, although the number of exhibitors fell to 1,725.

Toward the end of the year, the price of oil began a precipitous fall that eventually brought it down to $10 per bbl at the end of March 1986, barely a month before the conference. But OTC had already steadied itself by learning from its error of 2 years earlier and committing to an exhibition regardless of business conditions and by re-emphasizing its technical program.

Attendance was down over the next decade, but if the industry was struggling with depressed conditions, the role of the conference was to bring many of the best minds together and help figure out from a scientific, engineering, and technological perspective how to set it on a better course and build a brighter future. Technical paper presentations never fell below 200 over that span and pushed to a level of 309 in 1996, a record at the time. A year later, attendance topped 40,000 for the first time in 12 years and in 1998 it climbed to almost 50,000.

After 3 decades at the Astrodome complex, the conference in 2002 moved to the new, adjacent Reliant Center at Reliant Park (now NRG Center at NRG Park). By now the industry was building for a strong recovery, which was to take hold later in the decade. Attendance, 49,620 in 2002, rose above 50,000 both of the next 2 years and reached 51,000 in 2004.

In 2006, OTC attracted almost 60,000 people, and attendance jumped to 67,000 in 2007. The conference initiated a full-day workshop for Houston-area science teachers that year, which has now become a fixture at OTC.

Attendance rose to 73,000 in 2008. While the impact of the global financial crisis late in the year caused attendance to decline the following spring, the 67,746 attendees at the 2009 OTC slightly exceeded the number from only 2 years earlier.

While OTC attendance fell to just under 95,000 in 2015, the full impact of the price collapse wasn’t seen until the following year when attendance dropped to 68,054. In 2017, the event drew 64,700 people. Yet even with the downturn’s impact, the 2016–2017 attendance figures are comparable to the strong 2007 total and markedly higher than the 50,000 level of the early 2000s. What’s more, technical paper presentations have been well above 300 in each of the past 3 years. As prices have been stabilizing and rising since late 2017, officials are cautiously optimistic about attendance at the upcoming 50th conference.

Over its 50 years, the Offshore Technology Conference has become a phenomenon, so much so that the Board of Directors in recent years has established three regional conferences modeled on the interdisciplinary basis of the Houston event: OTC Asia, OTC Brasil, and the Arctic Technology Conference.

With its variety of sponsoring organizations, now numbering 13 [see sidebar article], OTC covers a range of topics that no single society could provide in an annual conference and no group of two or three organizations could offer around a common discipline. The program features specialized, niche sessions and other sessions with broader areas of interest. A session on flow assurance, for example, will have input from SPE and AIChe and draw attendance from members of both groups. And the wide range of the sponsoring groups and subject matter drives a tremendous diversity of exhibitors.

“If you’re involved in the offshore industry and have a story to tell, the first place you want to present the information, as a technical person, is OTC,” Jones said. “Some of the seminal papers we’ve seen in the industry have been presented there and primarily because it’s about the offshore industry globally, not about a specific discipline. All of the technical elements of offshore solutions are discussed, either in papers presented, in panel sessions, or when exhibitors display innovative ideas in offshore technology. It all happens at OTC.”

The conference not only is a magnet for seasoned technical professionals and industry authorities worldwide, it also can be a valuable occasion for people new to the industry.

A Year’s Training in a Week

“I used to run a subsea group in Chevron,” Jones said, “and one of the best learning opportunities I could give my people was to have them go to OTC. With new graduates, I used to encourage them to attend for as much time as they could over the 4 days. It was a year’s worth of training in a week just because you’re exposed to so much.”

And like so many industry professionals, the first thing Jones did this year “as I’ve done every year, is put OTC in my calendar.”