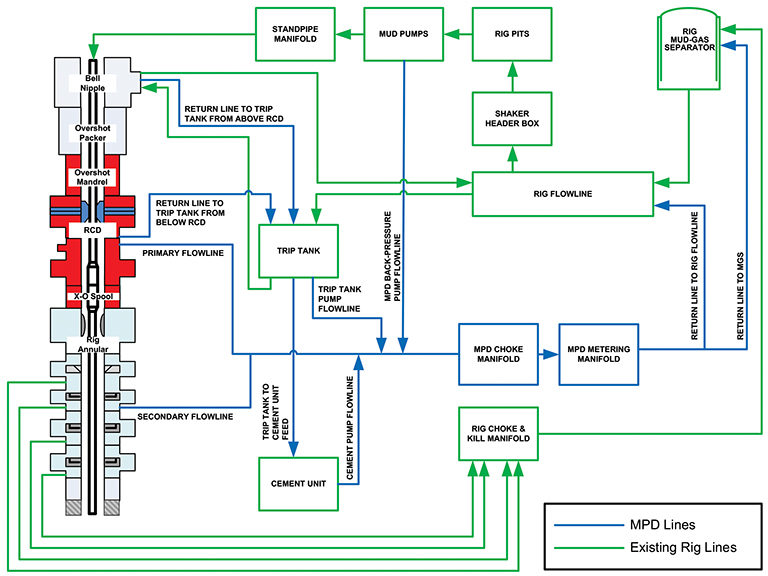 Managed-pressure drilling (MPD) is an increasingly common technique in narrow-margin high-pressure/high-temperature (HP/HT) wells. However, MPD is sometimes viewed as a bolt-on technology, only added after much of the planning work has been carried out and all other alternatives have been exhausted. The decision to use MPD should be made at the earliest stage of well planning. An early commitment to integrate MPD into an HP/HT drilling operation can make MPD more than just an enabling tool and turn it into a performance tool that offers significant operational benefits.

Project 1. For an HP/HT field redevelopment in the UK North Sea, seven sidetrack wells were drilled from a jack-up over an existing platform. MPD was used from the beginning, but the full benefits of MPD were not realized until later in the project. MPD was initially included to hold surface backpressure (SBP) across two connections to mitigate borehole-stability risk in an unstable shale. However, once the system was operational, further benefits continued to be identified and the scope of MPD operations grew significantly. At the same time, more knowledge of the subsurface was being gained, and it became clear that some of the planned wells would not be drillable without MPD because of a significantly reduced drilling window in the overburden. MPD became a key part of the design philosophy for later wells, where managed-pressure techniques were used to set and cement casings significantly deeper than would have been possible conventionally. MPD successfully mitigated classical HP/HT issues so that problems with losses and gains, handling of elevated gas levels, and mud-weight-selection issues were all virtually eliminated.

This paper describes a high-pressure/high-temperature (HP/HT) expandable liner hanger product that offers metal-to-metal and elastomer sealing capabilities at the liner top in the host casing.

One would think that, in these challenging times, high-pressure/high-temperature technology and projects would be put on the back burner, with everybody chasing zipper-fractured barrels from shale. Well, it is not so.