Future US Onshore Growth Depends on a Higher Price 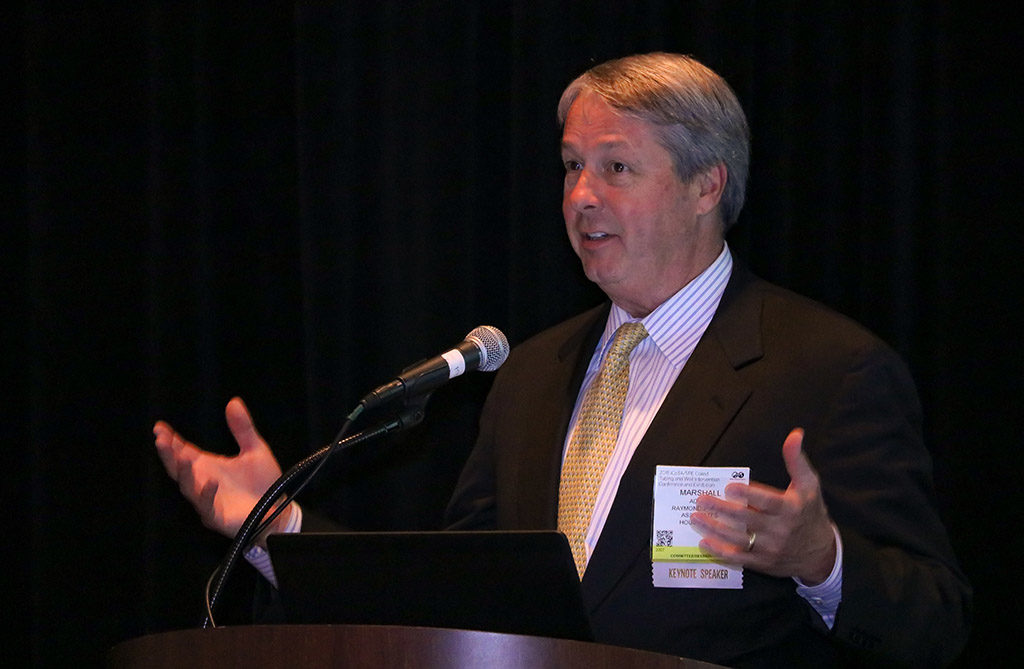 Marshall Adkins, director of energy research at Raymond James, delivers the keynote speech at the Coiled Tubing and Well Intervention Conference and Exhibition held in The Woodlands, Texas.

US onshore producers are expected to keep adding oil production to keep up with growing global demand, but only if the price of oil continues rising as well.

The admittedly bullish outlook was offered by Marshall Adkins, director of energy research at Raymond James, who said that based on drilling plans his consultancy tracks, the US will increase production this year by 1.7 million b/d and by another 1.4 million b/d in 2019.

During the keynote speech at this week’s Coiled Tubing and Well Intervention Conference and Exhibition, which is put on by SPE and ICoTA, he acknowledged that his optimistic outlook is at odds with the value currently placed on publicly traded oil company stocks.

“I have never seen more apathy and pessimism toward our business. And the fundamentals have never looked as good,” he said. Investors see things differently because his outlook assumes a break in the connection between rising US output and oil prices stuck at around $50 bbl.

Adkins described a market where crude inventories have gotten tight, other major oil producing countries are unwilling or unable to significantly add production, and electric cars are far from ready to begin cutting into gasoline demand. While higher prices are encouraging offshore exploration and production (E&P), that will take time.

Global demand has caught up with what onshore operators in the US can produce, and their growth is limited because the days when new wells were far more productive than old ones have passed.

US unconventional oil production glutted global markets during a 5-year surge where the annual productivity gains exceeded 30% a year. That ended in 2016, when it rose 17%. This year, an 8% gain is expected and, after that, the investment firm’s outlook assumes 5% a year productivity gains “forever and ever.”

Even that modest gain comes at a cost. That statistic is not adjusted for the added expense of techniques used to increase production such as pumping bigger frac jobs or drilling longer laterals. And there are a lot of variables in the outlook.

Actual productivity will depend on how the industry responds to problems associated with denser development, from new wells producing less than older wells nearby due to overlapping production, or damage to older wells when new ones are fractured nearby. Adkins said new well productivity “could easily be negative in 2019.”

All that adds to the cost of production, while the glut of natural gas means that production is not going to grow much revenue. “Production efficiency growth in the US is slowing down and stagnating,” Adkins said. “We are going to need $65/bbl to sustain this long term.”

The cost of new production looms larger because investors are demanding that companies live within their means. The days when growth was more important than profits have passed. Now E&P companies need to show they can generate the cash needed to pay for drilling and completions.

Adkins showed a list of large shale operators, and only three were reporting positive cash flow. The squeeze on exploration and production companies could be a plus for the service sector by increasing demand for what they are selling while limiting oil production growth to sustainable levels.

Prices have risen since a deal between OPEC and other major producing nations to restrain production, which has succeed in significantly lowering global supplies. While the group has reached the inventory target it set, production in those countries is hardly rising. Some are not investing in oil fields. Production has declined in Venezuela due to its economic crisis, which could lead to a total production collapse, disrupting world oil markets.

And while Saudi Arabia has said it has the capacity to add millions of barrels of oil, it has not done so.

While Saudi’s enormous reserves are thought to be some of the cheapest in the world to produce, Adkins said the actual price it needs is based on the profit required to support the Saudi economy. The cost to adding production there is a carefully guarded secret. The Saudis may make more money letting prices rise than paying to produce more. “If the Saudis have all that excess production, why has their storage gone down?” Adkins said.

Future US Onshore Growth Depends on a Higher Price