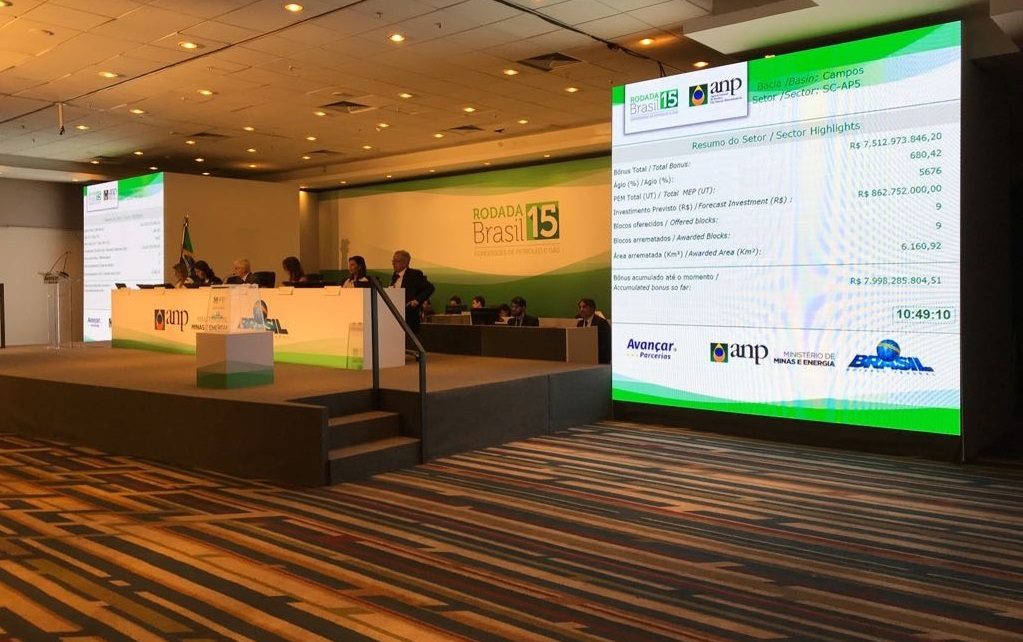 A wide array of international oil companies shored up their presences in Brazil and Mexico last week following a pair of auctions. The events furthered energy reforms for the two Latin American oil and gas powers, both months away from presidential elections in which leftist candidates have vowed to dial back the changes.

Preceding Brazil’s 15th Round on 29 March was news that two blocks in the Santos Basin would not be offered after a court determined they would earn more value for the country as part of production-sharing contracts. Those blocks, which garnered strong interest, will be awarded in June.

The offshore portion of the latest round was active nonetheless as 22 of 47  blocks were awarded, with much of the interest coming in the Campos Basin. Like the last Brazilian offshore auction in September 2017, ExxonMobil won the most blocks, tallying eight, while Petrobras and Wintershall each took seven blocks and Shell, Chevron, Statoil, and Qatar Petroleum (QP) each took four blocks. BP also won two blocks.

Overall, 12 companies bidding individually or in consortia from 11 countries were awarded blocks, which cover 16,400 sq km in the Campos, Santos, Potiguar, Sergipe-Alagoas, and Ceara Basins. Nine blocks were awarded in Campos, seven in Potiguar, three in Santos, two in Sergipe-Alagoas, and one in Ceara. No offers were made for onshore blocks available in the auction.

A record $2.4 billion in signing bonuses were raised, with the Campos Basin’s C-M-789 block receiving $850 million from a consortium of ExxonMobil, Petrobras, and QP. The first phase of the contracts is expected to generate investments of at least $360 million. "The auction surpassed all expectations,” said Decio Oddone, director general of Brazil’s National Petroleum Agency. “We had diversity of operators, geographical diversity, and extraordinary bonuses.”

ExxonMobil will operate six of the eight blocks it won. The US supermajor, which was awarded 10 blocks in the 14th Round last September, now holds interests in 24 blocks covering 8100 sq km in Brazil, making it one of the largest acreage holders among international companies there. ExxonMobil won four blocks in Campos, two in Santos, and two in Sergipe-Alagoas. ExxonMobil plans to obtain 3D seismic coverage this year on more than 4000 sq km, including all of its operated exploration blocks announced last year, subject to permitting approvals.

All four of Statoil’s blocks are in the southern part of Campos, near the Norwegian firm’s operated position in the BM-C-33 block where its Pao and Gavea discoveries are located. Statoil in the basin also operates the producing Peregrino field and has a stake in the Petrobras-operated Roncador field. Shell took one block in Campos and three in Potiguar, bringing its total operated presence offshore Brazil to 18 blocks. Shell will operate one block in each of the two basins.

The awards include nine well commitments and $124 million in tiebreaker payments. The Mexican government said investment during the term of the contracts will total $8.6 billion, and it will receive 72%–78% of the projects’ profits.

Pemex won four blocks in Sureste: two partnered with Total, one with Shell, and one individually. Total’s three blocks in the basin included another alongside BP and Pan American. Block 30, near the Talos Energy-led Zama discovery and Eni’s Amoca discovery in Area 1, generated the most interest in Sureste, ultimately going to a consortium of DEA, Premier, and Malaysia’s Sapura E&P.

Premier, part of the Zama consortium, said it has “has identified numerous material leads and prospects on Block 30 in the Tertiary clastic plays, typical of the Sureste Basin. Several of the prospects identified exhibit [direct hydrocarbon indicators] on existing 3D seismic, significantly derisking the potential of this block. These anomalies are similar to those seen at the Zama and Amoca oil fields.” The Block 30 group plans to acquire additional 3D seismic in 2019 ahead of firming up drilling locations for 2020, Premier added.

Eni and its partner Lukoil were awarded rights to Block 28 in Sureste, which “allows Eni to build up and consolidate a new core area with significant operational synergies in the country,” the Italian multinational firm said. Eni holds a 100% stake in Area 1 where it has discovered 2 billion bbl of hydrocarbons in place and has submitted a development plan. Eni in Sureste also operates Blocks 7, 10, 14, and 24.

Repsol and Premier each won two blocks in Burgos. Premier describes Burgos as a “highly prospective basin directly inboard of the prolific deep water Perdido fold belt. Premier has mapped several structural closures on existing 3D seismic in analogous plays to those proven in the onshore Burgos basin and offshore the US Gulf of Mexico.

“The exploration targets are Pliocene to Miocene in age and extensive regional mapping and basin maturity modelling suggests access to oil charge,” it said. “The initial work program includes reprocessing existing 3D seismic, which will enable Premier to better define the trapping geometries in the extensional play setting and to derisk a potentially material oil play.”

Pemex’s other three blocks won were part of two consortia in the Tampico-Misantla-Veracruz Basin, where the Mexican state-owned firm is partnering with DEA and CEPSA in Blocks 16 and 17, which are near Pemex’s and DEA’s existing partnership in Block 2. Pemex said its newly awarded blocks will create “exploration and development synergies” with nearby infrastructure that’s already in place.

DEA is also slated to become the first international oil and gas company to operate a producing onshore field in Mexico after the energy reforms. In early March the German firm signed a contract with Pemex for a 50% stake in the mature Ogarrio field, 107 km west of Villahermosa in Tabasco. Current gross production is about 10,000 BOE/D from about 100 active wells.

“We aim to increase the production from Ogarrio significantly already within the next year,” said Juan Manuel Delgado, president of DEA Mexico. “To optimize the field performance and boost production short-term, we will carry out an extensive workover campaign for the existing wells. In addition, we plan drilling further development wells from early 2019 on.”

Elsewhere onshore Mexico, Pemex said last week that it has signed a contract with private US operator Lewis Energy for exploration and extraction of the Mexican extension of the Eagle Ford. Lewis Energy, based in San Antonio, has drilled more than 500 wells on the Texas side of the shale play.

The $617-million deal covers development of the Olmos field in Coahuila and targets production of 117 MMcfD of natural gas by 2021. Olmos field contains an estimated 800 BCF of gas.

Mexico’s National Hydrocarbons Commission earlier this month announced that blocks in Round 3.3, the country’s first unconventional auction, will be awarded in September. Nine blocks are up for bid covering 2704 sq km in the Burgos Basin in northern Tamaulipas.