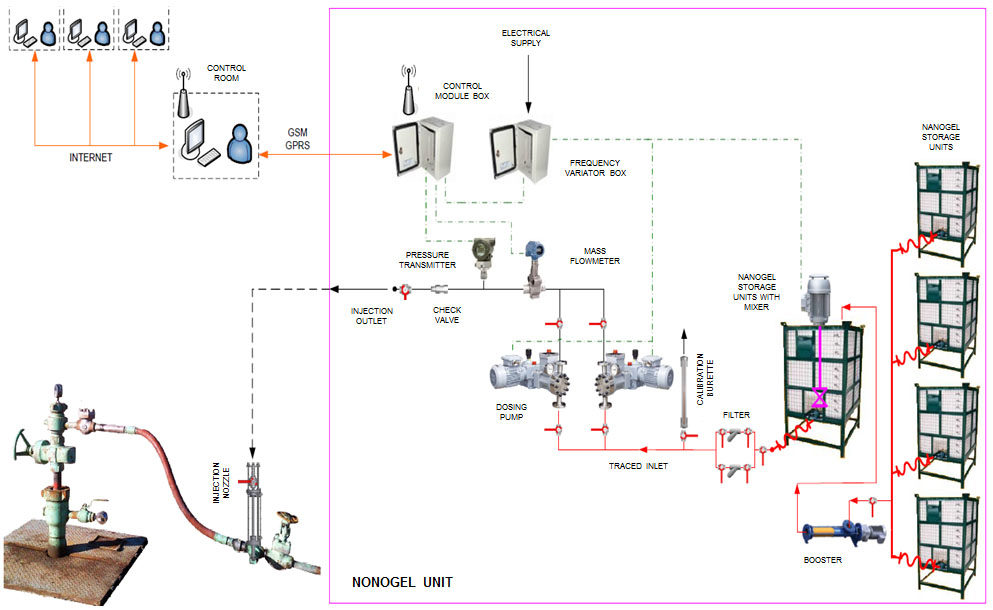 Despite the increasing attention paid to nanogels, there has been little research about the transfer of their properties to field pilots. The authors of the complete paper, SPE 184586, observe that nanogels increase their size faster than expected or produce aggregation leading to serious blocking problems at the sandface. This was observed in both coreflooding experiments and field pilot tests regardless of water composition. The addition of a certain concentration of surfactant slightly improves injectivity.

The authors refer to a Chinese commercial system whose manufacturers describe the purpose of the treatment as the following:

The key message is that nanospheres divert water flow deep in the reservoir from high-permeability to low-permeability regions.

The product application in the field is very simple. It consists of adding the nanogel emulsion to the injection water, which is an advantage because specific facilities are not needed.

To prepare the dispersion (2,000 ppm) of nanogel in the laboratory, the product is added to water under stirring at 700 rev/min at room temperature. A description of the product’s characteristics is provided in the complete paper.

Reservoir Characteristics. Barrancas is a high-temperature (100°C) and medium-salinity reservoir. The reservoir is under waterflooding; currently, the recovery factor is approximately 27% at less than one pore volume of injected water. The reservoir is formed by conglomerates and sandy conglomerates. The trap is of the structural/stratigraphic type. The reservoir has four intervals (Green, Purple, Blue, and Red), with the following average properties:

Injection Pilot. The nanogel-injection pilot began in December 2013 in the Barrancas Formation on injector Well B-342. The original design was the injection of 0.2 pore volumes in the array (1 year of injection, 30–40% active matter) to obtain a recovery factor increase of 6%.

The facilities are compact and easy to implement (Fig. 1; see image above). The dosing system placed in the well location has two high-pressure pumps (200 kg/cm2). There is a digital high-pressure flowmeter to control the nanogel injection.

There were two attempts to inject nanogel emulsion. In the first case, the rate was approximately 100 m3/d and the pressure 155 kg/m3. After the nanogel injection, the injectivity rate decreased very quickly. The strategy to prevent injectivity impairment was to diminish the product concentration. The first period lasted approximately 4 days and the pressure rode up to 190 kg/cm2, with an injection rate of 40 m3/d (in the same period, there were several injection downtimes). It was then decided to stop nanogel injection because of low injectivity. Later, several cleanups were carried out with chlorine dioxide, but the damage was not easily removed. Mud acid was subsequently employed to clean up the well.

The injectivity loss was highly influenced by the nanogel; the other wells in the area did not lose injectivity in the same proportion.

Step 1. The objective of this step was to validate the quality of product (nanogel emulsion). The conditions and the values of the product were the following:

Step 2. Although the product passed the quality test, it was important to evaluate what happened when the nanogel emulsion is dispersed into water.

Step 3. According to the manufacturer’s specifications for measuring the nanogel size, it is necessary to separate the oil phase with an organic solvent. Thus, the investigators added 2,000 ppm of the product in synthetic injection water and then put the aqueous solution in contact with the solvent (n-hexane) in a separating funnel.

Step 4. Six coreflood experiments were carried out to evaluate the injectivity of product with different types of water. Five of them were performed on Berea sandstones (gas permeability = 100–200 md), and the sixth was performed on Bentheimer sandstone (gas permeability = 1.7 darcy). The coreflood tests were carried out with a constant flow rate at 70°C.

Berea 1. The pressure on the inlet increased 6 times over the reference value (filtered synthetic injection water) after being swept with 4 pore volume (PV). The pressure transducer located on the first tap did not show changes, indicating that the product was accumulating on the inlet face.

Berea 2. The pressure on the inlet increased 3.5 times over the reference value after being swept with 12 PV. The pressure transducer located on the first tap did not show changes, indicating that the product was accumulating on the inlet face.

Berea 3. The pressure on the inlet increased 16 times over the reference value after being swept with 16 PV. The pressure transducer located on the first tap showed a small increase after being swept with 11 PV. The water injection that followed in the flux direction tends to stabilize the pressure. The sweep is more unstable because of the interactions between the nanogel and suspended solids in the injection water.

Berea 4. It was thought that the injectivity loss is caused by dispersed oil or the nanogel’s aggregates, so it was decided to perform a flow test that added surfactant. The pressure on the inlet increased 19 times over the reference value after being swept with 12 PV. The pressure transducer located on the first tap showed a small increase after being swept with 5 PV. The water injection that followed in the flux direction tends to stabilize the pressure and helps to reduce the inlet pressure approximately 20%.

Berea 5. A coreflood with the nanogel dispersion (having extracted the oil phase) was carried out in order to evaluate the influence of the oil in the injectivity loss. The pressure on the inlet increased 4.5 times over the reference value after being swept with 11 PV. The nanogel product without oil phase went through the porous media after 12 PV were injected. The pressure in the intermediate taps increased also 4.5 times; therefore, the oil phase contributed to the plugging.

Bentheimer. This sandstone was used to evaluate the injectivity of the nanogel product on a porous media of high permeability. The pressure on the inlet increased 12 times over the reference value (filtered synthetic injection water) after being swept with 8 PV. The inlet of the sandstone is shown in Fig. 2. The plugging caused by the product is clearly visible.