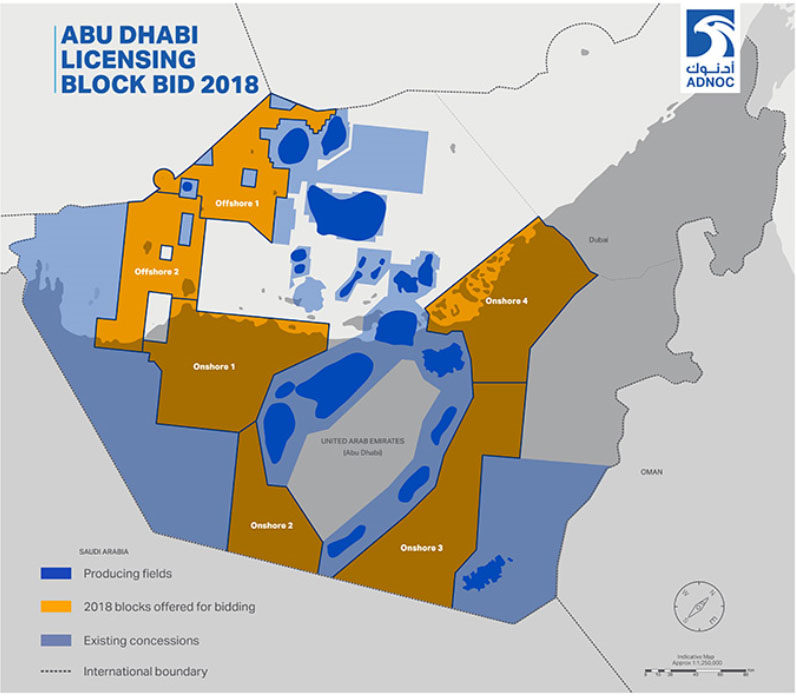 Abu Dhabi National Oil Company (ADNOC) is planning its first-ever competitive tender for international partners to participate in the exploration and development of oil and natural gas, in an effort to boost production in the UAE.

Placed for bid will be four onshore and two offshore blocks, with bidding expected to conclude by October and ADNOC to announce the winners by year’s end, company Chief Executive Officer Sultan Ahmed Al Jaber said Tuesday at a news conference. The partners would bear the exploration costs, and with the startup of production, ADNOC would assume a 60% interest.

“The launch of these large new licensing blocks is an important step for Abu Dhabi and ADNOC as we develop and apply new strategies to realize the full potential of our resources, maximize value through competitive bidding, and accelerate the exploration and development of new commercial opportunities,” Al Jaber said.

The UAE is the world’s seventh-largest oil producer. The country’s largest emirate, Abu Dhabi produces most of the UAE’s oil and holds approximately 6% of world crude oil reserves.

Despite the UAE effort to curb production, in line with the restrictions established by OPEC to clear the global market excess of crude oil, Abu Dhabi plans to increase production capacity to 3.5 million B/D by the end of the year. It recently granted concessions to Total, Eni, and other companies to help with the development of fields already in production.

It is very rare that a major OPEC country allows international companies to explore for oil and gas inside its borders, according to Robin Mills, the chief executive officer of consultant Qamar Energy. “It should be fairly low-risk since there is a lot of oil,” he said, adding that Abu Dhabi’s fields typically have low production costs. The UAE is the fourth-largest producer within OPEC.

The areas under tender amount to almost 11,580 square miles combined and hold an estimated “multiple billion barrels of oil and multiple trillion cubic feet of natural gas,” according to Abdul Munim Saif Al-Kindy, director of upstream at ADNOC. How much of this resource base would be commercially producible he did not estimate.