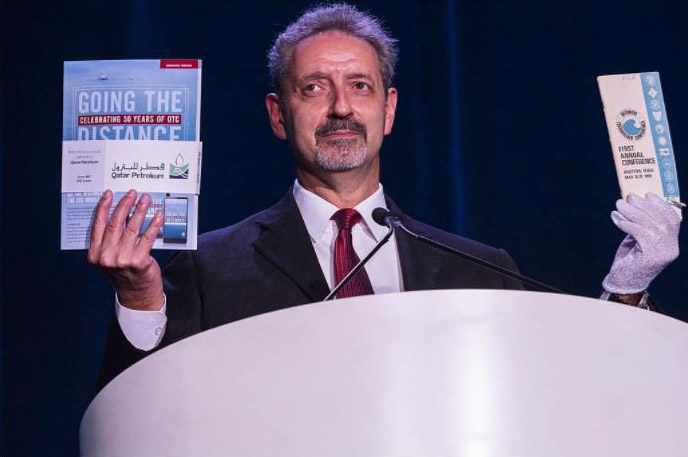 Wafik Beydoun, chairman of OTC, speaks during the opening ceremony at the Offshore Technology Conference. The 1969 program, handled with protective gloves, in one hand and this year's program in another. Source: OTC Instagram.

The 50th edition of the Offshore Technology Conference (OTC) kicked off with a distinguished panel representing operators and service companies evaluating the contributions of the past half century. And while the panel took a look back at the significant progress and innovation that has occurred since 1969, they also painted an optimistic view of the offshore sector’s future.

Speakers emphasized the progress made in the safety of offshore operations as well as the technological innovation that has occurred since the first OTC was held in a small convention hall in Houston that attracted 2,800 attendees. More than 60,000 industry professionals attended last year’s conference.

After listing some of his company’s significant offshore developments over the years in Abu Dhabi, Africa, and the North Sea, Total’s Pouyanné expressed optimism about the offshore sector’s continued health, noting that many legacy discoveries are still producing or have led to new ones. “The past also affects the future,” he said. Oil price cycles and technical challenges will continue to be managed. “In our industry, anything is possible and nothing is impossible,” he added. “What makes me very confident for the future of offshore and the deep-water industry is its capacity to innovate.”

Lance, noting emergence of unconventional onshore output, said offshore projects in the future have to work at the lower end of the oil price boundary. Projects need improved design and efficiency as well as standardization. “Design one, and build many” should be the watchword going forward, he said. The use of data analytics, machine learning, and blockchain all have potential to make the offshore sector more efficient and economic, he added.

NOV’s Williams said he is enthusiastic about the future of offshore. Particularly because of recent advances in technology. “Just like the first OTC in 1969, OTC this year is brimming with energy, passion, and people to make the industry safer and more efficient,” he said. “The lesson of the past 50 years is that creative minds and clever tools can change the world.”

Miller, Brekelmans, and Silva Guedes also pointed out the advances made in safety and technical innovation over the past 5 decades and expressed confidence that the sector would continue to innovate and work together. Shell and Petrobras have won numerous OTC awards for offshore project achievements. “The future is about being more scrupulous," Brekelmans said. “We will need much more innovation and collaboration.”