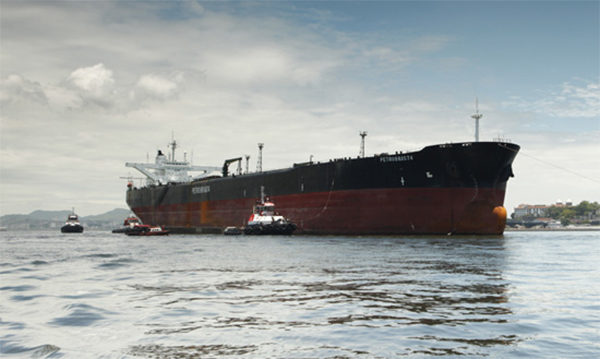 Petrobras started production from Búzios field in the pre-salt of the Santos Basin on 26 April with FPSO P-74. Source: Petrobras.

Brazil seemingly offers everything an offshore oil explorer could want—enormous conventional reservoirs, many of the biggest discoveries in recent years, and a big, growing domestic market for oil and gas.

But when it came time for ExxonMobil and BP executives to talk about their recent billion-dollar splurges in deepwater offshore blocks there, they focused on past struggles.

They acknowledged the potential was huge. “Petrobras created an enormous amount of value, finding more than $40-billion worth of oil and starting up one of the great energy plays” in the world, said Erik Oswald, vice president for Americas for ExxonMobil.

But his talk at the 2018 Offshore Technology Conference described ExxonMobil’s experience in Brazil as a three-act play, where they are hoping the current act turns out better.

The first was a portfolio of promising prospects that ended in disappointment, with eight dry holes. The second was a major offshore block that ExxonMobil “loved” until it was drilled.

“We failed to understand the basic genetics of the basin. And we made a fundamental exploration mistake by putting all our eggs in one basket in a frontier play,” Oswald said.

Adding to the complexities was the 2014 oil price crash, the staggering cost of putting ultradeep fields into production far from shore, and volatile, often unfavorable, government policies.

“Geology and potential do not create competitive reservoirs,” said Felipe Abelaez, BP’s regional president Latin America, where he alluded to past policies that put some of the most promising areas off limits and increased the costs faced by operators with high fees and extremely high shares of the spending going to Brazilian suppliers.

With oil prices up from the lows, the government has softened onerous regulations and offered a steady stream of prime blocks that can be operated by international oil companies, and partnerships with Petrobras are helping both sides

Among the bidders is ExxonMobil, whose winning bids allowed it to go “from one of the smallest IOCs [international oil company] to one of the largest with 2.1 million acres,” Oswald said.

It is too early to say how this act in the exploration drama will play out, but as a major IOC it has to keep trying. “IOCs are always looking for new resources; we do not have the luxury to miss any major play,” Oswald said.

Success will require better exploration results plus continued moves by those now in power allowing them to make money on high-priced blocks.

Abelaez was hopeful the new government “will continue this dialogue which has been absolutely fundamental to attract investment to Brazil.”

An example of what he is talking about was the recent back and forth on Brazil’s local content rules. The percentage set in many past rounds required such a large share of the cost of development to be spent in the country that the operators were not likely to ever make money.

“There are risks to ramping up some around policy issues, especially on local content that could delay deployment on some of these FPSOs,” said Matt Blomerth, head of upstream research for Latin America at Wood Mackenzie.

The problem is likely to be solved with new rules reducing the requirement, which would allow the hulls to be produced in lower cost Asian yards, reducing the pressure on Brazilian facilities. Also fines for not meeting the local content rules have been reduced, expanding the options for operators.

That tweak is an example of how the offshore business is looking brighter, but certainly not simpler.

Offshore rounds there are based on the bidding rules within the area. Some are in the production-sharing zone, where the biggest discoveries were made and where the rules allow the highest cuts for the government. Others are in the concession zone where the rates are low but past wells not so great.

BP was a huge bidder in one production-sharing auction in which the government cut soared far above the expected 50% level, with bids giving the Brazilian government up to 77% of the ultimate production.

Just outside the borders of that areal polygon, bidders compete based on the upfront bonus payment, but the government cut is considerably lower for these concessions, Blomerth said.

As a result, a great well in the prime area with production sharing could earn the same internal rate of return as one in the concession area.

When ExxonMobil put up a record amount for a block in a concession sale, it appeared it was looking for the best of both worlds.

“In the best case, you can get one of these great-performing wells under concession regime. Then you have hit the jackpot,” he said.

The poker analogy fits, given the risks of playing in the high stakes game offshore Brazil.

As a result, there has been no talk about going back to the days when Brazil limited the role of international players by requiring that Petrobras be the operator in the prime areas.

“Partnerships are a way to enhance capacity and share risks,” said Solange Guedes, chief exploration officer for Petrobras, during a presentation. She added that more knowledge sharing is required because “we must focus on cost optimization.”