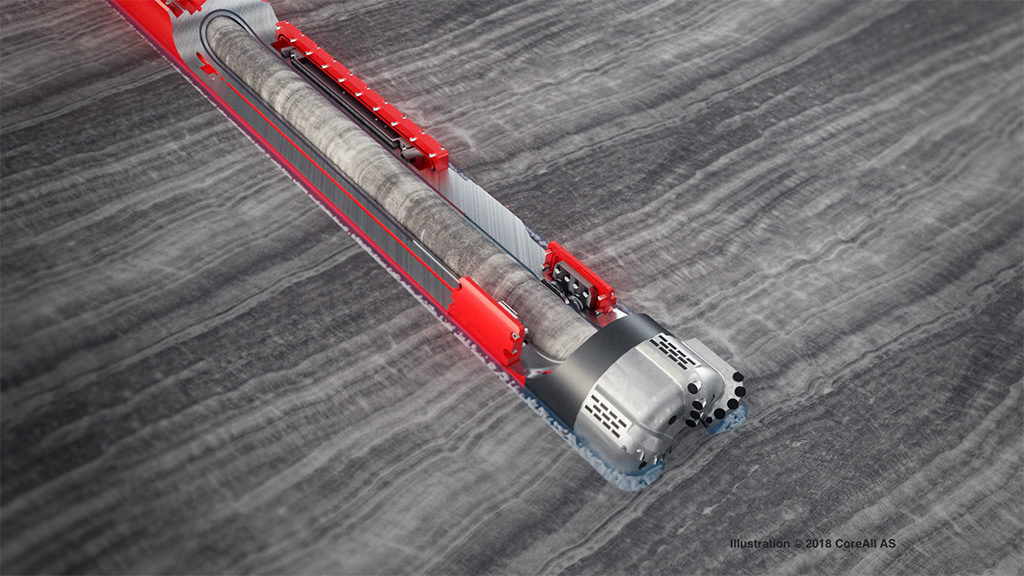 An illustration of the Intelligent Coring System which uses a suite of sensors to analyze reservoir cores samples as they are being acquired and a communication system that sends this data to the rig in real-time. Source: CoreAll

One of the chief goals of an offshore exploration and appraisal program involves taking core samples of the targeted reservoir. Embedded within that reservoir rock are valuable data sets that include direct measurements of relative permeability, wettability, and fluid properties. This information is considered essential for fine-tuning reservoir flow models and guiding exploration geologists to subsequent drilling prospects.

But despite the importance of subsea coring, it is not always a straightforward operation because conventional methods rely on surface measurements to determine where to begin taking the samples—which means a core might be collected from the wrong location.

CoreAll, a technology startup based near Bergen, Norway, has developed a new coring assembly to solve for this issue. The company says its Intelligent Coring System (ICS) is the first technology of its kind to collect formation-evaluation data of the core and transmit it to surface in real-time through mud-pulse-telemetry. The novelty of the ICS earned CoreAll a Spotlight on New Technology Award at this year’s Offshore Technology Conference (OTC) in Houston.

“All the operating companies understand that core drilling is something that hasn’t really changed in several decades,” said CoreAll Program Director Alf Berle. He noted that the industry has made “small tweaks” to mitigate problems like core-jamming, “but apart from that the innovation has been pretty limited.”

As the ICS is run downhole, operators can measure up to 15 different parameters through a suite of sensors that detect resistivity, temperature, gamma ray, vibration, and if the core integrity has been compromised by breaking and spinning inside the core barrel. A pre-job telemetry schedule can be set to send each measurement at desired rates.

This logging-while-coring package is not meant to replace a comprehensive wireline logging run—which is done after the coring process—but rather to ensure that the core is being taken from the ideal location within the reservoir. Operators can also use the data to know when to stop taking core or when they encounter formation issues such as a water zone. Another benefit includes having the ability to assess reservoir behavior by comparing the ICS log data to that of the wireline log which is typically run several days after coring and will be impacted by drilling mud filtrate invading into the reservoir matrix.

CoreAll was founded in 2012 by Per Erik Berger, who saw the poor condition of the core samples being taken from a Johan Sverdrup discovery well; one of the largest oil fields ever discovered on the Norwegian continental shelf. The initial concept pushed by Berger, a former coring expert with Baker Hughes, was to design an in situ resin-system that could hold together the core, thereby providing better insights to exploration teams.

However, the research and development process revealed such an innovation required an entirely new type of core barrel, which eventually became the ICS. “We put that idea on the shelf,” said Berle, “and tried to solve the first problem which was just having an instrumented assembly.” Like Berger, Berle is also a former employee of Baker Hughes where he was a geosteering manager.

The firm has since successfully trialed the technology in four onshore test wells; three in Norway and one in the Czech Republic. CoreAll is now looking to earn its commercial track record with an opportunity to run the ICS into a subsea well. As it searches for this opportunity, the company is also entering into initial talks with multiple service companies and equipment manufacturers to ensure that the unit can integrate with other legacy systems as it relates to power requirements and communication protocols.

CoreAll also has further technological ambitions which include completing the development of an internal drilling device module which involves a surface-activated component that closes off the core barrel and allows the unit to perform as a conventional drilling system.

“You can drill ahead, log the formation, and as soon as you see the reservoir coming in you just open up and collect the core, and that is where the big cost savings potential is,” explained Berle. He added that depending on depth, this added capability could eliminate 24 to 48 hours of the non-productive time involved with tripping the drill bit out of the well to switch to a coring bit.

The drilling module will also allow core samples to be taken at multiple intervals and enable operators to continue drilling for hundreds of feet after the sampling is completed to provide enough wellbore clearance for a more comprehensive wireline logging tool to be run.

CoreAll has received more than $6 million (40 million Krone) over the past 4 years to pay for its development work. Half of the funding has come from Lundin Norway, a division of the Swedish-based independent oil and gas company, Lundin Petroleum. Other industry backers include the United Kingdom’s Spirit Energy and the German production company DEA who are joined by two government sponsors, the Research Council of Norway and Innovation Norway.