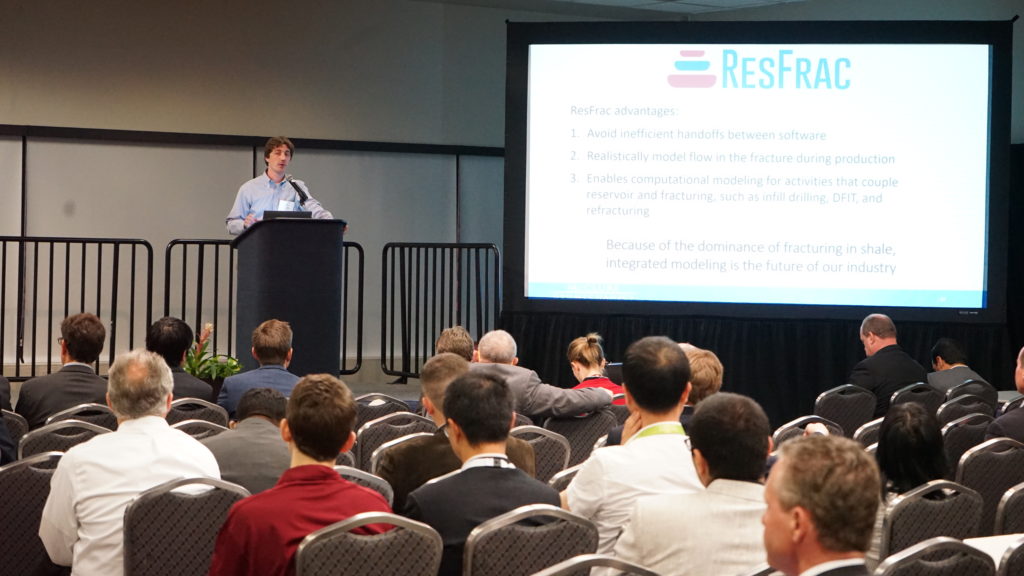 Mark McClure, Founder and CEO of McClure Geomechanics, gives his pitch at the 4th Annual Rice Alliance Startup Round Up which was hosted by the 2018 Offshore Technology Conference (OTC). Dozens of other startups also made their case for why the oil and gas industry's largest corporate venture groups should invest in their budding firms. Source: Jason Notoras, SPE

Being a startup in the upstream industry does not make for an easy existence. For starters, the target customer base is famously known for its collective skepticism of new and unproven technologies. And even if an innovation passes technical muster, it must go well beyond creating nominal value to entertain wide interest from oil and gas companies.

But as those obstacles are being overcome, it can help the cause of a young firm to have industry insiders publicly recognize it for having the potential to survive the business’s long uptake cycle. This is why for 4 years running the Rice Alliance for Technology and Entrepreneurship has been selecting up to 50 new companies to make their big pitch at the Offshore Technology Conference’s (OTC) Startup Roundup. Out of the lot, a group of investors and industry experts in attendance distinguished 10 as the “Most Promising” energy startups of 2018.

The ongoing dynamics of crude prices have helped fuel greater interest among oil and gas producers in these startups, which not so long ago may have been considered too small or too early-stage to work with. This shifting perception was underlined by the event’s participation of more than three dozen firms, including the venture capital divisions of Schlumberger, Halliburton, BP, Saudi Aramco, Shell, Statoil, and Total.

“What we’ve found is that as crude prices have come down, those upstream energy companies are looking to find new technologies to reduce the price of finding and producing oil,” said Brad Burke, the managing director of the Rice Alliance, a technology commercialization group launched by Houston’s Rice University nearly 20 years ago.

Most of the startups given the highest honor at the OTC-hosted event are digital technology developers that aim to enable better and faster decision making for oil and gas customers; a reflection of the industry’s growing attraction to data science and advanced computing tools.

Though most of the companies are new to the industry, many of the people creating them have been around for a while. This is the case for one of the awarded startup founders who sees the decade he spent with Shell as a reservoir engineer as a major factor in his firm’s early momentum.

“Domain expertise is kind of a requirement,” said Ashwin Venkatraman, the CEO of Austin-based ReserMine Technology Solutions, a cloud-based reservoir modeling and simulation firm that uses analytics to improve the user experience of carrying out those processes. Venkatraman started ReserMine less than 18 months ago but has already entered into agreements with Noble Energy, Occidental Petroleum, and his former employer Shell.

From an investor’s perspective, it is also important for startups to have leadership that has mastered the art of selling a value proposition and the ability to maintain a steady hand through the ups and downs that come with running a startup.

This view is shared by George Coyle, a managing partner at the venture group Energy Innovation Capital, who said one of his investment strategies is to find “experienced entrepreneurs who have been successful in the past—it tends to mean that they could be more successful in the present.”

“In addition, they understand what they’re going into, the pain points of the customers, and the value of the capital,” he said.

But combining serial entrepreneurship with the allure of new digital technology is not the only way for a startup to get noticed. Venkatraman and other founders know that it is also critical to have a development roadmap that inspires companies to be early adopters.

“What we’ve learned is [that] you need to always do something that can show customers the vision on where you want to go,” he said. “Once customers kind of get that, they’re willing to partner and they go all out to support you in this journey.”

AlphaX Decision Sciences was founded in 2017 and is a San Jose, California-based firm that offers predictive and prescriptive analytics software to improve maintenance procedures and for production optimization.

Belmont Technology was founded in 2017 and is a Houston-based firm that seeks to use cognitive tools such as natural-language processing and artificial intelligence to accelerate geoscience workflows, including seismic interpretation.

DeepCast.ai was founded in 2017 and is a Houston-based company that is providing big-data consulting services and has developed tools to evaluate well locations, equipment health, and production forecasting.

Febus Optics was founded in 2015 and is a Pau, France-based firm that manufactures distributed fiber optics systems to monitor pipelines, subsea umbilicals, pipe-in-pipe, and oil and gas wells.

McClure Geomechanics was founded in 2015 and is a Palo Alto, California-based company that has developed ResFrac which is an integrated hydraulic fracturing and reservoir simulator.

Pursuit Technologies was founded in 2016 and is a Calgary-based company that is developing an evaluation tool for multi-stage completions that aims to reduce water production while increasing oil production in horizontal wells.

ReserMine Technology Solutions was founded in 2017 and is an Austin, Texas-based firm that offers a cloud platform to enhance the user experience of building reservoir models and simulations.

Senslytics Corporation was founded in 2015 and is a San Jose, California-based company that uses predictive analytics tools to warn of failures on drilling rigs and to predict issues with wireline testing.

Triad Technologies was founded in 2016 and is a Houston-based firm attempting to commercialize an aerospace-derived optical multiphase flow meter for oil and gas producers.

WFS Technologies was founded in 2003 and is a Livingston, Scotland-based company that has developed wireless communication systems to enable subsea Internet-of-Things and edge computing.

In the complete paper, the authors generate a model by using an artificial-neural-network (ANN) technique to predict both capillary pressure and relative permeability from resistivity.