Volunteerism—The SPE Strength That Lets Me Sleep Soundly at Night 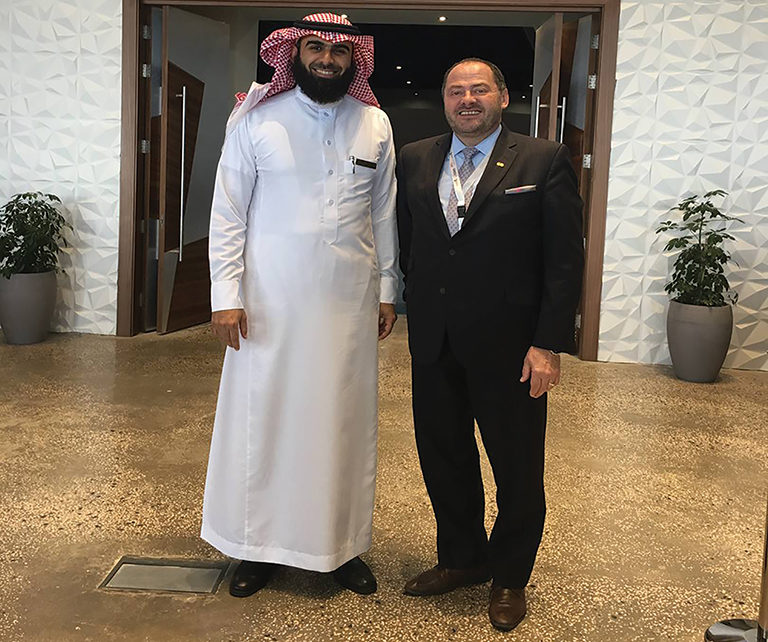 Adel Al-Qahtani, the KSA ATS&E event chair, worked with a group of young volunteers to organize and run the successful event.

We have a strong future, thanks to hardworking young members

What keeps you awake at night?

That is a question often posed by one of my favorite SPE presidents ever, Helge Hove Haldorsen. Of course, he was usually referring to an area of risk or danger. I ask that question of myself often. Sometimes I even answer myself.

But today I want to turn that question around—what helps you sleep at night? For me, it’s knowing that the future of SPE is safe in the hands of the Millennial generation. Yes, the Millennials. Contrary to what you may have been led to believe, our young professionals are enterprising volunteers. Globally, this group is bringing volunteerism to new heights because they believe in blending their personal and professional lives to help others.

Recently, I witnessed one of the best volunteerism demonstrations across our organization: the Kingdom of Saudi Arabia (KSA) section’s Annual Technical Symposium and Exhibition hosted yearly in Dhahran, Saudi Arabia. It dawned on me while attending the ATS&E that a worry over the supposed lack of global volunteerism is not something that keeps me awake at night. In fact, SPE’s volunteer culture helps me to sleep at night.

Over these past 5 years, I have served on SPE’s international board first in the capacity of Canadian regional director and now as 2018 president. I cannot recount the number of vigorous (not necessarily rigorous) discussions over the state of volunteerism, mostly in the negative. The narrative often goes like this:

The _____ conference has been going for 10 years (or 20, or 30), and this same group of volunteers has run it. Now that they are all retiring or moving away, there is no way this conference can continue.

With the reduction in regional directors and/or SPE staff, there is no way this event can continue. The new generation just does not understand volunteerism.

And the best one of all (one that I am guilty of saying):

With the spreading of SPE to all parts of the globe where national companies dominate, how are we ever going to have volunteer events?

All I can say is wrong, wrong, and wrong. I can clearly say that volunteerism is alive and well everywhere in the SPE world. Today’s youth—both professionals and students—embrace volunteering, but they make it their own. It may not be the way we in the older generations define volunteering; however, not only does it work, but their methods also succeed. Let me give some examples.

I’m going to start with the one fresh in my mind, KSA’s ATS&E. Completely run by volunteers, this symposium and exhibition is as professional and slick as anything I have seen. During the event, I saw cameras everywhere—on drones, on people, and on booms. Organizers made sure to capture footage and feed of every keynote and social event. I was most impressed that the presentation halls were well attended. The flow of traffic was smooth from keynotes to paper presentation rooms to posters; it was an easy stroll into the exhibition hall. This event was well-documented, well-handled, and 100% run by young volunteers from the local section.

The event chair, who also is a KSA board member, is Adel Al-Qahtani, who works all year with a group of volunteers. The event is well attended by many companies in the region and is strongly supported by Saudi Aramco as lead sponsor. But it is absolutely designed and managed by volunteers who give extra time from their day jobs. Al-Qahtani tells me that there were 900 abstracts, with some 250 accepted as papers or posters. Impressive.

The young professional in charge of VIP transportation, Akram Al-Barghouti, was standing at my hotel door morning and night, with a secret clipboard containing my agenda. I don’t know when he slept. Then he told me he was studying for the SPE certification exam on Sunday, 2 days after I left. If that is not dedication to volunteerism, I am not sure what is.

Another great example comes from the SPE Norway Council. It is headed by Brynjulv Kvaale, who brings together volunteers across Norwegian sections, which are mostly populated by young people. He has a vision for a robust, independent, driven Norwegian Continental Shelf that will be busy for years to come. The council actively discusses ways to ensure that SPE is involved in technical dissemination and collaboration, in all areas including an Arctic event in the north and a financial event in Oslo. Passionate about the future of our industry in their own backyard, these Norwegians are all volunteers.

Pakistan is a long way from Norway, geographically and culturally, but the largest crowd that I have spoken to so far was the annual SPE Pakistan section event in Islamabad. A 3-day event that funds activities for the whole year, it is full of paper sessions and relevant keynotes—and well-attended by both professionals and students. They even publish a compendium every year containing the papers. And, they alternate every year with the geologists making sure there is a balanced approach to the issues. Sponsorship is wide for this event, with about 10 producers and all the major service providers, plus a number of smaller suppliers. Longtime SPE member Syed Wamiq Bokhari, CEO of Pakistan Petroleum Limited, is the past Pakistan section chair, and he has done a great job of getting out the members—and occasionally even the prime minister.

I could give you many more examples of how our young professionals put my mind at ease. But, let me tell you that my soundest sleep is guaranteed by the SPE students. Student conferences, especially in Europe, are amazing. In the last year, I have attended Gubkin University Horizons Congress in Moscow; AGH University East Meets West in Krakow, Poland; Ivano-Frankivsk University International Fuel Congress in Ivano-Frankivsk, Ukraine; and SPE’s German Section Student Technical Conference in Clausthal, Germany. This is not an exhaustive list, only the ones that I have attended. They are incredible events, and each is run by students (possibly with some help from the section). I would highly encourage every SPE member to attend a student conference hosted by a university or local section.

And in addition to the technical aspects, many of these conferences are great social events. I need extra sleep before and after just to keep up. Usually for me these events involve an accordion, sometimes until 3 a.m. I have heard karaoke in many languages, including English, German, Polish, Russian, Turkish, and Arabic, and maybe a few others that I don’t recognize. Keeping track of these student conferences can be difficult, since they are outside of the SPE international events tent.

One particularly visionary student, Sofija Soskic of the Gubkin University student chapter, led the team that created a website on which the student chapters can exchange conference dates on a global calendar. She did not do it alone (at least 14 other student chapters were involved), but she was the catalyst, so I think she deserves a shout-out for being the driving force behind Petrostage.org. Soskic is a leader of tomorrow, an amazing volunteer, and a reason why I have no worries when I sleep at night.

With innovative, hardworking, and dedicated volunteers such as Soskic, the future of SPE is guaranteed.

So in response to the perennial question posed by the 2015 SPE president, I can say confidently: “Helge, thanks to amazing volunteers and a new generation culture change, I sleep really, really well at night.”

Volunteerism—The SPE Strength That Lets Me Sleep Soundly at Night