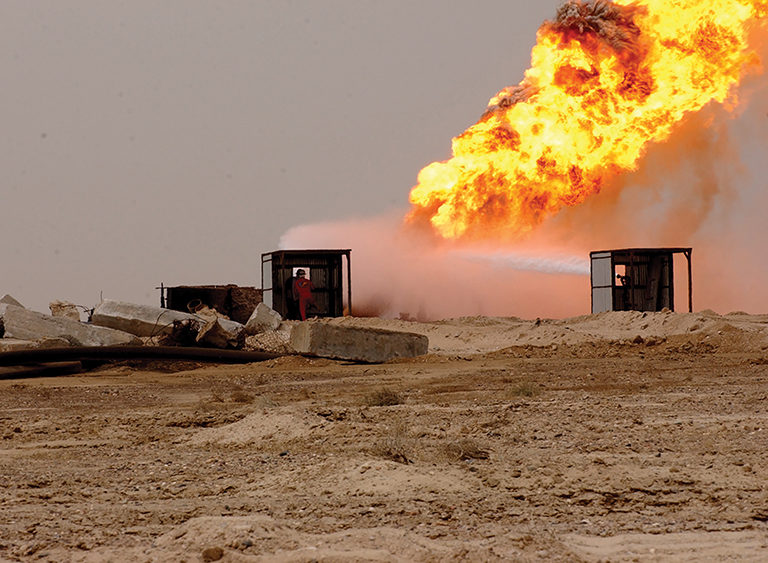 Source: Boots & Coots.
Data from this well fire in the Rumaila field set during the invasion of Iraq in 2003 was one of the Boots & Coots jobs included in the study of well fire efficiency.

An oil well blowout can burn like a rocket, which can be a good thing. Burning leaves little or no oil behind, according to a recent study (SPE 189610).

The study has been used to make a case for an oil spill response plan now before regulators to develop a field with more than 100 million bbl of reserves in the Beaufort Sea. Plan approval is one of the remaining barriers facing Hilcorp, the operator in a partnership with BP to develop the Liberty field.

If there is a blowout of a well on the gravel island that will be built for the project, the plan is to minimize the impact by igniting the well, and keeping it lit until a relief well can be drilled to plug it.

Spill plans based on burning have been an accepted option at other fields in that area, including the nearby Endicott field that was developed by BP and sold to Hilcorp in 2014. But unlike Liberty, Endicott is regulated by the state.

In the past, burning was favored because it was a better option than trying to clean up a spill in that harsh environment, which can range from difficult to impossible. Now getting a spill plan approved by federal regulators is considerably more complicated.