Marriage of Ideas Could Allow More Deepwater Gas to Shore 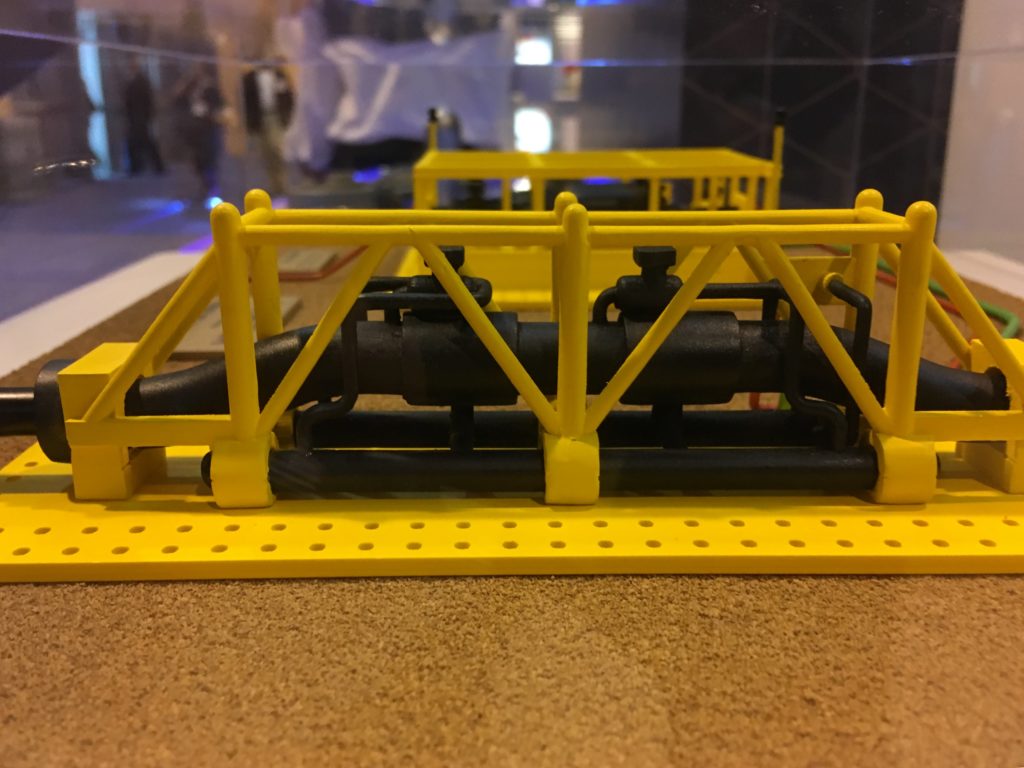 A small model shows the subsea gas/liquids separator at the heart of a system using multiple units to create what the inventors call “pseudo-dry gas” that is easier to move via subsea pipeline.

Lee Thomas admits he and his wife talk about some things most couples don’t. The thing is that he and his spouse, Laura Liebana, are engineers with overlapping interests.

His expertise is pipelines and hers is flow assurance. They met while working on pipeline systems used to transport gas from coal seams in Australia.

They moved on to offshore work in the Intecsea/Worley Parsons London office where they faced a problem common to those contrasting environments. There are fields in both that produce a mix of gas and liquid, where the energy required to move the mix through a pipeline significantly limits how much can be produced using natural pressure, among other problems.

But unlike coal seam producers, offshore engineers were not applying a trick common in the coal seam gas business—removing most of the fluid using separators. The method is based on something really basic—it takes a lot less energy to move just gas or just liquids— so they wondered, “Why has no one else done this?”

A mixture of natural gas and liquids offers engineers on deepwater projects two bad options. A wide-diameter pipe able to transport large volumes of gas will allow condensation, creating slugs and liquid holdup. As the natural pressure goes down, the liquids problem grows worse and, after a few years, the natural pressure is not high enough to sustain production.

Going to a narrower pipe and higher pressure reduces the slugging, but limits production from the well early on. The added frictional resistance in that narrow diameter pipe significantly reduces the productive life of wells.

There are options—such as adding a production platform, compression, or a second line—but they all require large investments.

It was an interesting problem, but back when the offshore business was going strong, they were busy at work and at home raising their two children. 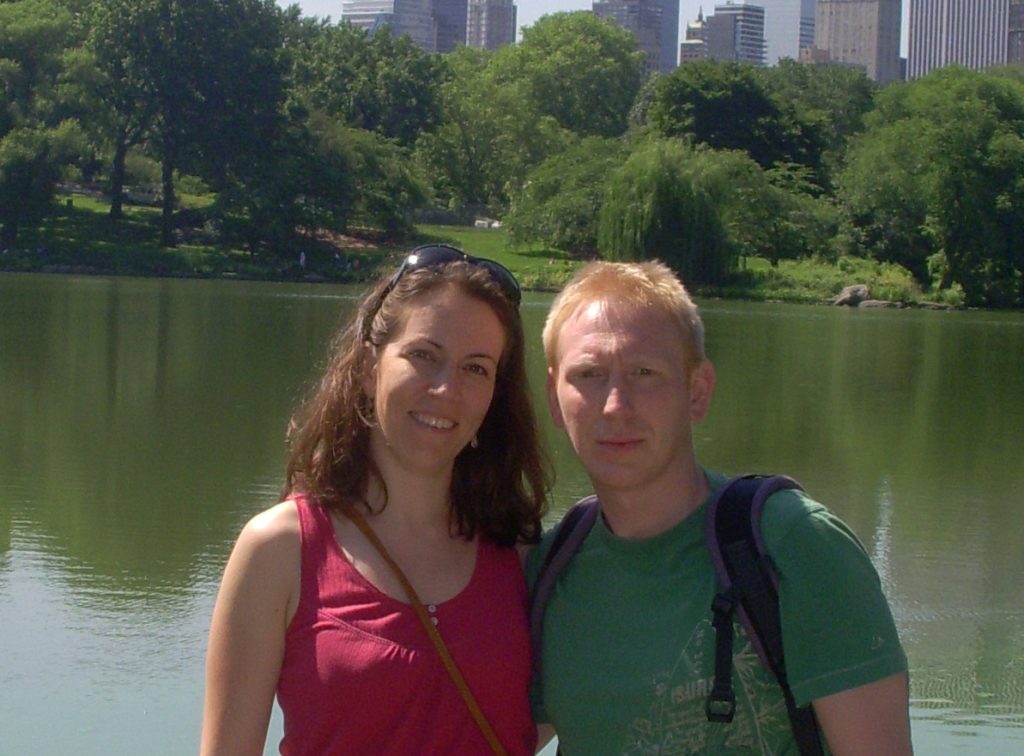 Laura Liebana and Lee Thomas became inventors after the couple was laid off during the downturn in the offshore business.

That all changed when they were laid off after the offshore business crashed. Or as Thomas put it, they now had “the opportunity and time” to look into that question. They assumed someone else had patented a solution, but were happy to find that no one had, and began looking for a way to make it work offshore.

What followed was a 3-month effort to do something audacious. A couple of engineers at home set out to find a way to profitably develop large stranded gas fields that can significantly outperform methods developed by some of the world’s most technically sophisticated oil companies. It was a period of lows and highs as they ran into walls and experienced eureka moments. Those solutions tended toward “increasing simplicity,” Thomas said.

The competition ranged from Shell’s floating gas liquefaction vessel, the Prelude, which cost nearly $11 billion, to the world’s only subsea compression system, developed by Statoil, which cost an estimated $2 billion.

Their goal was to turn to what Thomas described as a “brutally simple” method into a practical alternative that would allow gas lines running 200 km from a field to shore without reducing the potential production. Thomas said they may be able to stretch that to 300 km.

The technical paper delivered by Thomas at the 2018 Offshore Technology Conference in early May (OTC 28949) offered an example that compared their method to a more typical approach using current technology that delivered an additional $9 billion worth of gas from a field more than 170 km from shore and reduced capital expenditure by 40%. “If that is not going to get the project moving forward I don’t know what will,” he said. 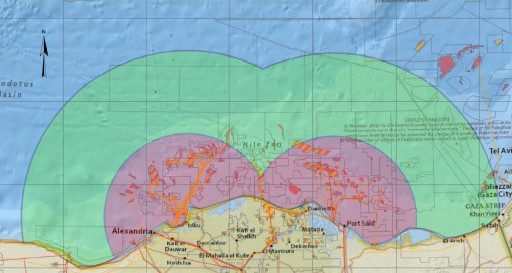 An innovation the could double the length of subsea tiebacks could allow a lot more fields to be tied back to facilities on land, as shown in this illustration based on map off offshore Egypt.

While separating gas from liquids is a simple way to improve flow efficiency, building a separator that fits into that system is certainly not.

The starting point was the bulky units used to process the gas and liquids flowing out of low-pressure wells. Those failed to check most of the boxes for deepwater separation. The subsea unit needed to be smaller—to fit into the space filled by a single joint of pipe and be handled by a pipe lay vessel, and able to stand up to extreme pressure, and it had to be piggable so it could be cleaned out using a widely available mandrel pig. Most important, it had to be able to efficiently separate gas and liquids moving far faster than what flows out of a coal seam well.

The inspiration for the prototype design was an in-line separator that Thomas had seen at a chemical plant in Saudi Arabia. The result looks like a like a humped section of pipe surrounded by a protective steel frame. There are no moving parts. A bypass line draws off some of the gas and that flow is used to draw off liquids. The liquids drain into a second flow line a fraction of the size of the main line.

After a period of intense conceptualization, flow simulation, and collaboration, the couple pitched their idea to their former employer, which hired them and put them to work on what became a 2-year effort to build, test, and sell a new idea to a conservative industry.

The OTC talk was an abbreviated version of what is clearly a well-rehearsed hour-long pitch to potential customers. The potential payoff for what they call “pseudo-dry-gas tiebacks” has attracted interest, Thomas said. While he would not name any names, after his talk he was asked by a group of engineers from Chevron in Houston to stop by their office to talk about the system. 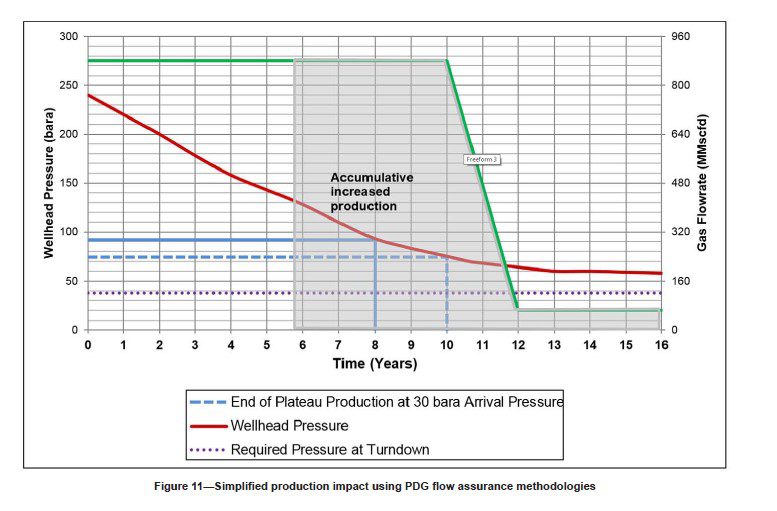 The talk offered a comparison with a pipeline system using a conventional line design with groups of wells 13 km apart feeding a 170-km line to an onshore facility that would liquefy the 880 mm sfc/d.

In the example, the multiphase mixture of gas and liquids flow through a line with a 30-in diameter, compared with the flow of “mainly dry gas through a 36-in line for the gas-only line. (The paper predicts the maximum liquid content after passing the first separator would be 0.012% compared with 14-27%).

The pressure required to move the multiphase mixture was more than double the nearly single-phase line. As a result, the natural pressure will only be able to maintain production for 4 years. By adding compression onshore, the operator could add 2 more years of multiphase production. By removing most of the liquids, they are able to produce more through a larger pipe and it appears likely to continue for 10 years, according to a chart in the paper.

Separation still comes at a significant cost. Putting in the six gas separation units shown in the example, plus a smaller second liquids line, would push the cost from $1.5 to $1.9 billion. In comparison, adding a floating production platform nearby for separation and compression would push the estimated total to $3.2 billion.

Work is still in the early development stage. They are working through questions raised by interested parties who have looked at the system and creating a prototype of the separator, which is the one component that has never been used offshore. They expect to test it in a flow-loop after this year.

If this lives up to its promise, this could allow development of stranded gas fields around the world. For Thomas, it meant he is back as a project engineer at Intecsea and did not have to go to his professional plan B: as a member of the British Army Royal Engineers he was considering a tour of duty in Afghanistan.

And after years of intense effort at work, Liebana, who works in flow assurance at Intecsea, is expecting their third child and will be going on maternity leave.

The engineering drawing of the pseudo dry gas separator. OTC 28949.

Marriage of Ideas Could Allow More Deepwater Gas to Shore