Argentina’s Shale Play is Beginning to Live up to Expectations 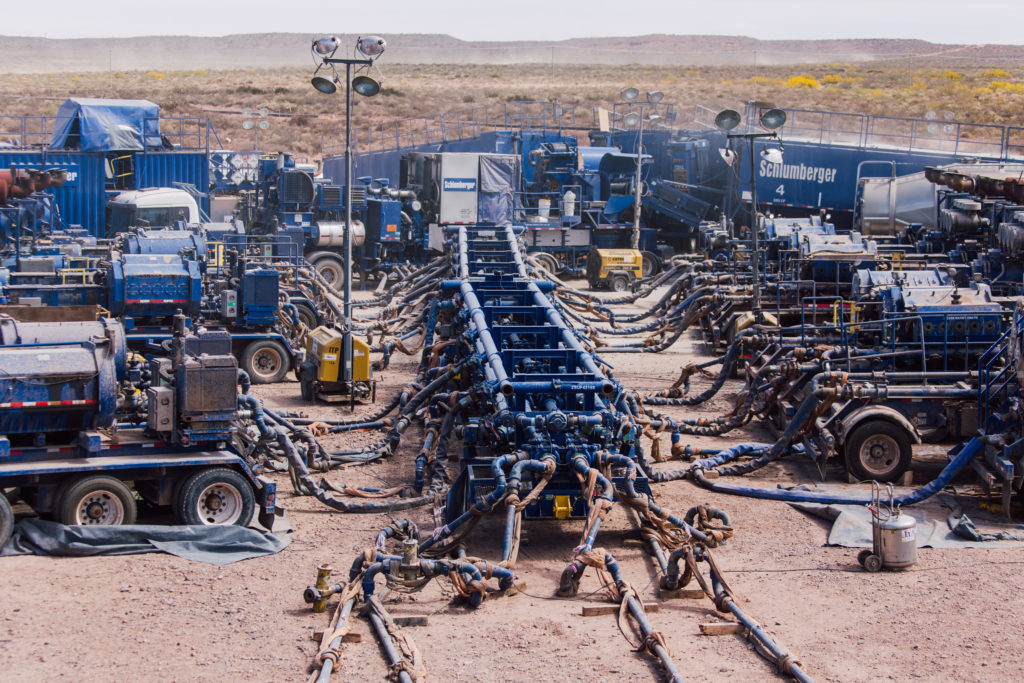 Source: Diego Levit/ YPF.
Schlumberger is fracturing the first well on a block in the Vaca Muerta where it is half owner along with YPF.

The Vaca Muerta has gone “from a great opportunity to a fact.” The fact is that the giant shale formation is beginning to deliver on high expectations, according to German Macchi, Argentine country manager for PlusPetrol.

Recent test wells the company drilled there “were better than the upper case,” producing more and richer gas. He was one of nine operators who reported equally strong results at a recent update meeting on the Vaca Muerta in Houston put on by the IAGP—the Spanish acronym for the Argentine Institute of Gas and Oil.

Two years ago when the group representing Argentina’s oil and gas industry held a similar day-long gathering, the talks focused on the formation’s huge potential because production was sparse. This time it distributed a map showing a number of blocks with pilot projects in progress and a growing number with commercial development. The fact is the rock is productive.

Now operators have moved on to worrying about the need for more rigs, roads, pipelines, water, and sand. With promising results and high prices paid for oil and gas—which sells for a subsidized price—they see problems ahead.

The equipment available for drilling and completions “needs to improve significantly,” said Javier Gutierrez, global operations manager for Tecpetrol. If not, “new operators coming into the Vaca Muerta will stretch those resources to the breaking point.”

Those in the packed room heard a message over and over, the rock is really productive, but: “It will take many other ingredients than the rock to make it a global super basin,” said Ed Kruijs, Shell technical manager, Argentina.

They were speaking to service companies who were asked to be ready to expand and government officials who will need to support the regulations and construction needed to sustain a decades-long effort to develop the formation. The cost of drilling a well there is down by 50% or more, but it is lagging behind the costs of the Permian Basin, where there have been similar reductions from a lower base cost.

“We are in a position within our company where we are competing for capital,” said James Blaine, project executive for international projects for ExxonMobil, adding that while the cost of the Argentine operations run by its XTO division are high compared with the Permian, “these are early days.”

“We do see a path to success. The question is, how fast will we get there?” Blaine said.

A big reason for the hopeful tone has been government policy changes loosening regulations on money and equipment flowing in and out of Argentina.

For example, the country eliminated a rule discouraging imports of used equipment by charging the same import duty it would on higher-value new machinery. An executive with an oil tools rental company asked about changing a rule that prevents it from exporting worn tools back to its shops in the US for repairs it cannot do in Argentina.

One measure of progress is the rise in the number of rigs working in the Vaca Muerta. Operators are “running 35 rigs and with some bidding process on going. I believe we will get to 40 in the basin,” said Jerónimo Valenti, joint ventures manager for Pan American Energy, which has been aggressively adding acreage in the Vaca Muerta.

By 2021, YPF, the national oil company that pioneered the play, plans to double its production, which will require about 20 working rigs, said Gustavo Astie, unconventional regional manager for YPF. The number is tiny compared to the Permian, which had more than 460 rigs running in early May.

Several companies reported following the North American trend toward longer horizontal wells, drilling their first 3000-m-long laterals, up from 2000 m or less. YPF is also beginning to use a high-intensity completion design that hits more clusters per stage, pumping slick water, and fine (100-mesh) sand to prop the fractures it opens, Astie said.

YPF has been holding regular meetings with Pioneer Resources, one of the most efficient US independents, to trade ideas, Astie said.

Shell is importing hardware and ideas from North America. It brought in a well design used in a comparable formation in Canada to “accelerate its learning curve,” said Ed Kruijs, Shell’s technical manager in Argentina.

The Permian is a source of cautionary tales about the problems that come with success. Natural gas flowing from the Texas play has exceeded the export pipeline capacity. While US operators can flare gas to keep producing oil, that is strictly limited in Argentina.

Argentine officials reported on plans to upgrade the roads and rail lines supplying the Vaca Muerta, and expand pipeline capacity. But widespread pilot programs are pushing north and west beyond the gathering lines and processing facilities in the early development zone.

“With our midstream projects we are looking at them from all different angles. We are looking at doing it ourselves or partnering with other operator or having contractors to do it and manage it, Blaine said. “We will decide in the next 12 months. It will all come down to what is the right business decision for us.”

YPF wants someone else to build those facilities. “We need to focus our capex on drilling wells and not on building infrastructure,” Astie said.

Others are worried the lines are not there as pilots go into production in the future. “We need to move forward quickly as possible for profitability. Drilling a bunch of wells and then waiting 6 months for a pipeline to hook them up will be painful,” said Gary Graf, subsurface manager for Wintershall.

Finding water for fracturing and disposing of produced water is another potential barrier to growth in the formation where the number of wells needed for full development is estimated to be nearly 40,000.

Early development drew water from a reservoir at the south end of the formation created by damming the Neuquén River. Those further away need to identify other sources, Graf said. “We are involved in a consortium to develop well-defined regulations on how to move forward on applying and producing source water and water disposal,” he said.

Finding a low-cost local source of sand for proppant is another unsolved problem. YPF reduced that expense from astronomical levels by building a sand processing plant in the Vaca Muerta. The cost is still relatively high, though, because the sand mined is on the other side of Argentina. Astie said YPF is still looking for a sand source nearby that meets its standards.

In comparison, mines in the Permian now provide 25% of the sand used there according to a presentation by Rystad Energy, which is beginning to track the Vaca Muerta. That has reduced costs there, but the traffic spawned by the sand delivered for massive frac jobs has caused some equally massive traffic slowdowns, said Benjamin Stewart, vice president for shale research at Rystad.

The road system in the Vaca Muerta is limited, and most often paved with gravel. Moving water through pipelines reduced tank truck traffic. Sand trucks are a tougher problem because there is no obvious option other than roads or rails.

Argentina’s Shale Play is Beginning to Live up to Expectations