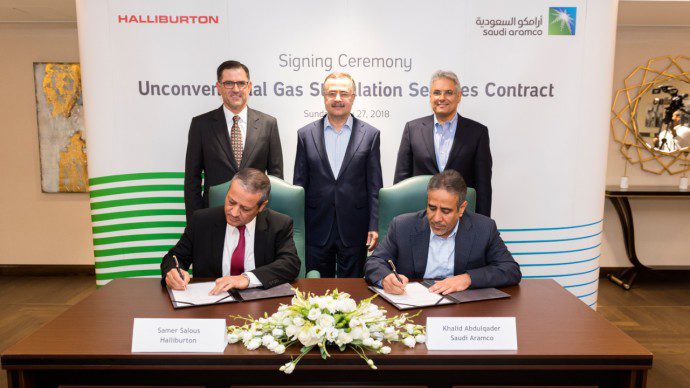 Saudi Aramco is tapping Halliburton’s expertise in developing unconventional resources, signing a 3-year deal with the giant service company to improve production in three Saudi Arabian shale fields. The deal is a sign that the US shale revolution is beginning to spread outside of North America and that Saudi Arabia is intent on meeting its long-term goal of increasing natural gas production to meet domestic and petrochemical demand.

Halliburton has been a leader in the remarkable growth of the US unconventional sector, and is now working on unconventional projects in Canada, Argentina, and Europe.

“This is a great opportunity to provide a tailored application of Halliburton technology, logistics management, and operational excellence to maximize Saudi Arabia’s asset value,” Jeff Miller, Halliburton’s chief executive, said in a statement at the contract signing ceremony in Saudi Arabia.

Senior executives from the two companies participated in a signing ceremony for the project Sunday and work is scheduled to begin in June. “We welcome their expertise,” Amin H. Nasser, Saudi Aramco’s chief executive, was quoted as saying.

Halliburton said it will utilize an integrated approach to support Saudi Aramco’s increased recovery and meet production targets by providing project management, hydraulic fracturing, coiled tubing, wireline and perforating, completion tools, and testing services. The terms of the contract were not disclosed.

In the past year, Aramco has awarded $4.5 billion in contracts to international oil service companies to increase its gas production, but has had mixed results.

“As a leader in unconventional resource development, we believe Halliburton will work best with Saudi Aramco to help in our pursuit of unconventional gas to serve domestic needs, offset local crude burning, provide feedstock for chemical industry development, and spur regional economic development in line with Vision 2030, the Kingdom’s national transformation program,” said Mohammed Y. Qahtani, Saudi Aramco senior vice president of upstream, according to news reports. “This contract includes a strong component to support our “In Kingdom Total Value Add Program” as developing the Saudi labor force and developing and utilizing local suppliers is vital to the success of this project.”